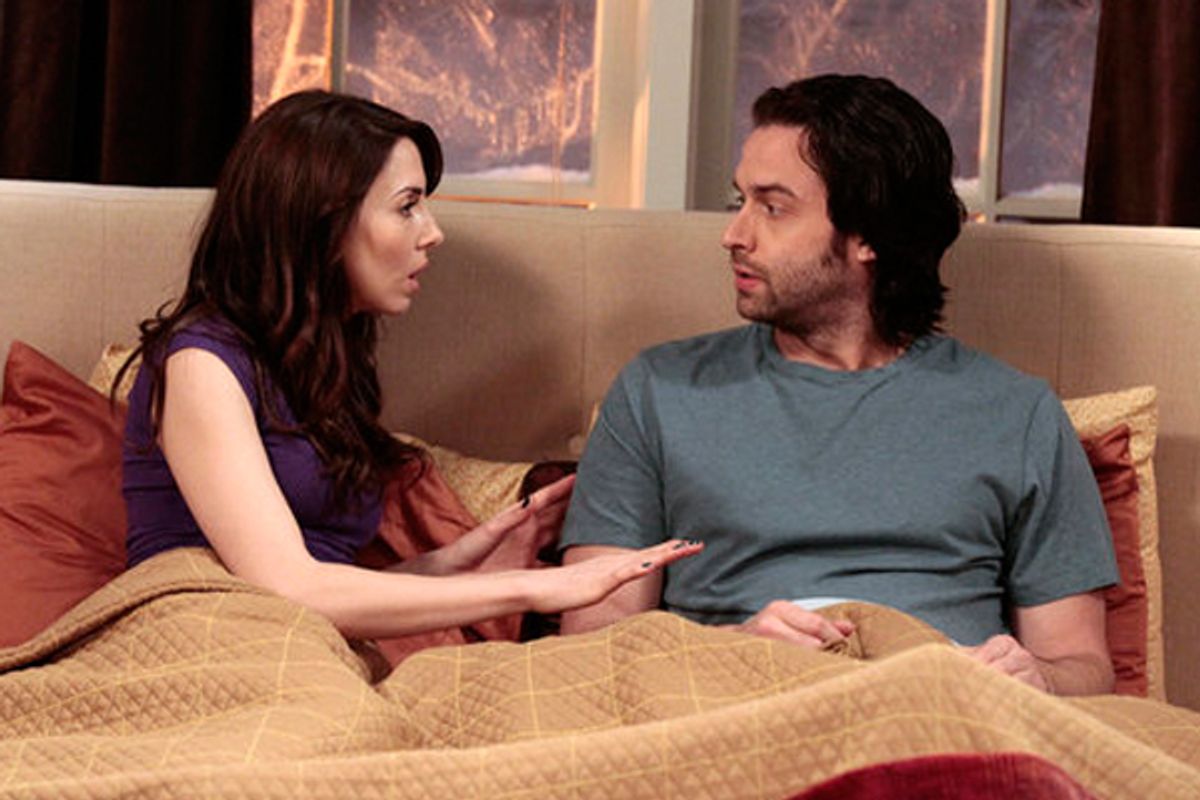 "Whitney" debuted to much attention: Cummings was a star of the new season, having created not just "Whitney" but CBS’ "2 Broke Girls." Both series were part of the wave of sexually active, single lady sitcoms that, six months later, still hasn’t crested. (ABC’s "The B in Apt. 23," NBC’s "BFF," and the best of the bunch, HBO’s "Girls," all come out in April.) "Whitney" secured the plum position on NBC’s schedule, a spot on the network’s storied Thursday night lineup, even though it wasn’t quite like the other shows already there. It had a retrograde, Men are from Mars, women are from the planet Crazy and Shrill ad campaign, canned laughter, an “Everybody just stop taking yourself so f---ing seriously” attitude about comedy (fastest way to start a bar fight with "Community" creator Dan Harmon or Leslie Knope? Say that) and, most relevantly, was not funny at all.

Early episodes cemented the perception that "Whitney" did not belong in a block of smart, adventurous sitcoms. For the first third of the season "Whitney" followed a distasteful formula. Whitney and her boyfriend, Alex, would face off over some banal disagreement — him checking out another girl, his condescending voice, her basketball skills — Whitney would escalate the fight to the point of insanity — refuse to talk to him, refuse to stop talking to him, set up a surveillance system in the house — the hapless, unlikable supporting actors would pop in and deliver crass lines, and then everything would get resolved.  The dirty jokes flowed freely and so did the bitterness. Although Cummings and the actor playing Alex (Chris D'Elia) had solid chemistry and showed flashes of really liking each other, their relationship contained so much immaturity and selfishness it was hard to see why.

But starting in Episode 8, in which Alex and Whitney took in an old sick dog, the show began to structurally right itself. Story lines no longer automatically pitted Alex and Whitney against each other: Sometimes they did things together -- like support each other through work crises, celebrate Christmas, talk sweetly about their future. And, even when they were antagonists, the show discovered a silver bullet for keeping those stories from becoming toxic: Alex and Whitney began to laugh at each other all the time.

On shows that are much funnier than "Whitney," characters hardly ever crack each other up. On "Whitney," Alex and Whitney crack each other up almost every line. Just as actors breaking up in a "Saturday Night Live" sketch has the magical effect of automatically making that scene enjoyable (if totally unprofessional), Alex and Whitney’s amusement makes them decent company. Their punch lines aren’t any better, but their rapport is. Now when Whitney takes things too far, it's with a playful glint in her eye; when Alex snaps back, he always means to keep the insults in bounds. The pleasure and amusement they take in one another turns spiteful fights into teasing banter, digs into knowing love taps, escalations into foreplay.

The show has corrected other aspects of itself as well. The four supporting actors were initially some of the least well conceived, unlikable extras ever assembled on a sitcom, all irritating and yet slightly dull, sour variations on standard, broad sitcom stereotypes who were totally implausible as Alex and Whitney’s friends. There's Roxanne, the sour, bitter alcoholic divorcee; Mark, the downstairs bro who is entirely unbelievable as a Chicago cop or a lady's man; and Lily and Neil, a flaky girl and a buttoned-up Indian dude in a committed, cloying, yet chemistry-free relationship. Compared to these four, Alex and Whitney were sparkly, brilliant and very attractive.

To explain their friendship, I've had to assure myself that it makes a sort of sense that the character of Whitney would only surround herself with friends she could outshine. But as the season has gone on, the supporting actors have been given enriching back stories. Roxanne's ex-husband broke her heart, and she is going through a long rough patch, thus proving that her sourness is not entirely innate. Mark, who doesn't seem at all like a Romeo, is, in fact, not: He's only slept with seven girls and just lies about it. And late in the season,  Lily and Neil broke up, freeing Lily to be more than the marriage-obsessed female counterpoint to the marriage-hating Whitney, and freeing Neil up to come out of the closet, a development that should finally give him something to do other than play the group's straight man.

And yet, while "Whitney" is wildly improved, there remains a problem: It's still not funny. The jokes are largely unoriginal and crass, the pacing is herky-jerky, the pop culture references seem forced, the few laughs there are typically come from the actors' delivery, rarely from the lines' cleverness. It's as if the show did a total overhaul of the engine— it should run great— but no one has the gasoline, the jokes, to make it go. "Whitney" is no longer painful to watch, and I now think there is some version of a sitcom starring Cummings and D'Elia (a barrel-chested, skinny legged man with a enough modern machismo and underlying sweetness to land another sitcom in a flash) and their perverse chemistry that could even be great, but "Whitney" is not it.

When "Whitney's" first season comes to an end next week it will be one of the more improved shows of the season, and it still won't be very good.