The return of "Castro did it" theory 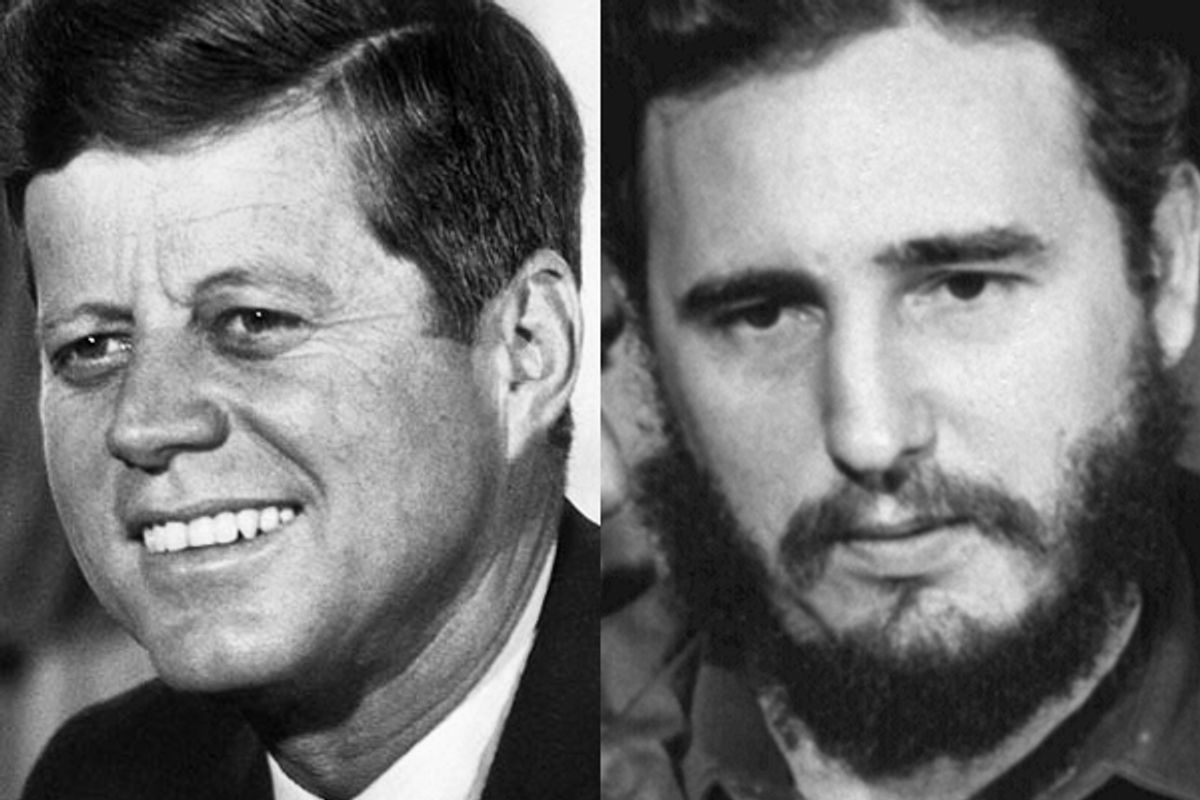 The Cuban intelligence service, under the leadership of Fidel Castro, connived in the assassination of President John F. Kennedy, according to a new book by a retired CIA analyst. Coming from Brian Latell, the Agency's former national intelligence officer for Latin America, the charge is both sensational and uncorroborated, yet still important.

Latell says flatly that Castro played a role in Kennedy's murder in Dallas on Nov. 22, 1963.

"Castro and a small number of Cuban intelligence officers were complicit in Kennedy's death but ... their involvement fell short of an organized assassination plot," he writes in "Castro's Secrets: The CIA and Cuba's Intelligence Machine," a well-footnoted polemic about Cuba's General Directorate of Intelligence to be published next month. Latell says accused assassin Lee Harvey Oswald told Cuban diplomats in Mexico City in September 1963 that he might kill JFK. Latell also speculates, without any direct evidence, that Oswald kept the Cubans apprised of his plans as he made his way to Dallas.

The  charge is sensational because Latell is the highest-ranking former CIA official to ever accuse the Cuban leader of personal responsibility for JFK's death. It is uncorroborated because much of the evidence Latell cites in the book is not in the public record or available to JFK scholars. Even the CIA is keeping its distance. When I asked the Agency to comment on Latell's thesis on Wednesday, a spokesperson replied, "You can report the CIA declined comment."

Still, Latell is a former CIA official in good standing, and his allegations signal the CIA may be changing its institutional position on the causes of JFK's death. As the 50thanniversary of JFK's death approaches in 2013, Latell's book indicates the Agency defenders are moving toward "a modified limited hangout" — Washington lingo for a public relations maneuver to release previously hidden information in the service of preventing exposure of more damning detail.

For most of the past five decades the institutional posture of the CIA has said that there is no evidence of  conspiracy in Kennedy's death and no evidence that Lee Harvey Oswald, a known leftist, acted at Castro's behest. In 1967, CIA director Richard Helms sent an order to every CIA station in the world ordering them to take steps to combat speculation about Oswald's motives and associations. The Agency's line echoed the Warren Commission: that Oswald had killed JFK for reasons known only to himself and anybody who thought differently was irrational or anti-American or both. If Latell, a career CIA employee, had written his book in the 1960s or 1970s, he would have been fired.

Indeed, Latell's book implies a  harsh assessment of the FBI and the CIA's performance in 1963. If what he says is true, both agencies were closely watching a known leftist encouraged by a hostile intelligence service and failed to prevent him from killing the president of the United States in broad daylight—and then failed to discern Cuba's involvement for close to a half-century. Latell, reached by telephone, declined to discuss specifics of the book in advance of its publication in April,  but he did say of the FBI and CIA, "They should have done a better job." When asked if the CIA or Congress should investigate his findings, Latell said, "I don't know that they should do anything."

Latell's most intriguing contribution is the testimony of Florentino Aspillaga, a career General Directorate of Intelligence officer who defected to the United States in 1987. Latell interviewed him extensively in 2007 and 2008, and found him unusually credible on the workings of the Cuban security forces. Aspillaga told Latell that on Nov. 22, 1963, he was manning a Cuban radio monitoring station that usually focused on Miami or Langley. His bosses, he said, made an unusual request that day: monitor the airwaves in Texas. Soon came the shocking news that JFK had been killed in Dallas. "Castro knew," Aspillaga is quoted as saying. "They knew Kennedy would be killed."

This story is worth checking. A number of other credible witnesses (not mentioned by Latell) came forward over the years to say they knew Kennedy's life was in danger in Dallas. The Cuban intelligence service had many informants among anti-Castro, anti-JFK militants with whom Oswald associated in 1963. It's quite possible that Cuba has not disclosed all that it knew about the accused assassin.

To buttress his case, Latell cites three other stories, all of them familiar to JFK scholars.

He quotes the reports of Jack Childs, a leader of the American Communist Party who also worked as an FBI informant. Childs met with Castro in May 1964 and reported that the Cuban leader had said that Oswald had told Cuban diplomats that he would kill the president and that Cuba had denied him a visa because of his provocative behavior. When the FBI received Childs' report, director J. Edgar Hoover downplayed its significance to the Warren Commission.

Latell also cites the intercepted conversation of a woman who worked in the Cuban Embassy in Mexico City named Luisa Calderon. A CIA wiretap picked up her remarks after the assassination in which she said, "I knew about it almost before he [Kennedy] did." Latell thinks the remark is indicative of foreknowledge of a plot to kill Kennedy. But the CIA's Mexico City station chief Win Scott didn't think her comment was significant and he didn't share it with the Warren Commission.

Which raises an obvious question: If this evidence is so compelling in 2012 why didn't the CIA and FBI forward it to the Warren Commission for investigation back in 1964? The answer is found in the hundreds of thousands of new JFK documents forced into the public record in the 1990s. The CIA and FBI didn't investigate what the DGI knew about Oswald in 1964 because any such inquiry would have revealed the curious role that the CIA itself played in the genesis of the "Castro did it" theory.

As I reported for Salon in 2003, within hours of JFK's murder, an Agency student group in Miami was giving reporters evidence of Oswald's pro-Castro ways. Declassified CIA records show that the group, Cuban Student Directorate, received $51,00 a month from an undercover CIA officer running  "psychological warfare" operations. The group's revelations about Oswald's public support for Castro in New Orleans generated scores of headlines across the country that linked Kennedy's murder to a "Castroite." When the Cuban students proclaimed in print the next day that Oswald and Castro were the "presumed assassins," it was the first JFK conspiracy theory to reach public print. Whether Latell knows it or not, his book is a direct descendant of this CIA-funded operation.

Yet in the days and weeks that followed the CIA blocked investigation of Oswald's Cuban contacts. When U.S. Ambassador to Mexico Tom Mann pushed for such an investigation in Mexico City in the days after the assassination, Mexico City station chief Win Scott rebuffed him with the support of the FBI. In Langley, the senior CIA official in charge of reviewing Oswald files, John Whitten, wanted to investigate Oswald's Cuban connections in Miami and New Orleans. He was promptly removed from his position by deputy CIA director Richard Helms.

The problem was that the Agency's pre-assassination interest in Oswald, far from being "routine" as the CIA told JFK investigators in 1978, was intense. The newly declassified records showed that between 1959 and 1963 more than 40 different reports were placed in Oswald's file, including State Department cables, intercepted personal letters and FBI reports. When Kennedy was alive, the file was controlled by the Agency's secretive counterintelligence staff, which is responsible for detecting threats to the Agency's operations.

Latell is aware of this record. He served as chief of the Agency's Center for the Study of Intelligence, which oversaw the declassification of the long-secret CIA material between 1994 and 1998. But the book does not address what the  Agency knew about Oswald before the assassination.

And this is what the modified limited hangout of the "Castro did it" theory achieves. It concedes errors and calls attention to new information about JFK's death while turning public discussion away from the troubling totality of the historical record and the thousands of JFK assassination records that remain secret. We are sure to hear more of the "Castro did it" theory between now and the 50th anniversary of JFK's death. It deserves the closest scrutiny.