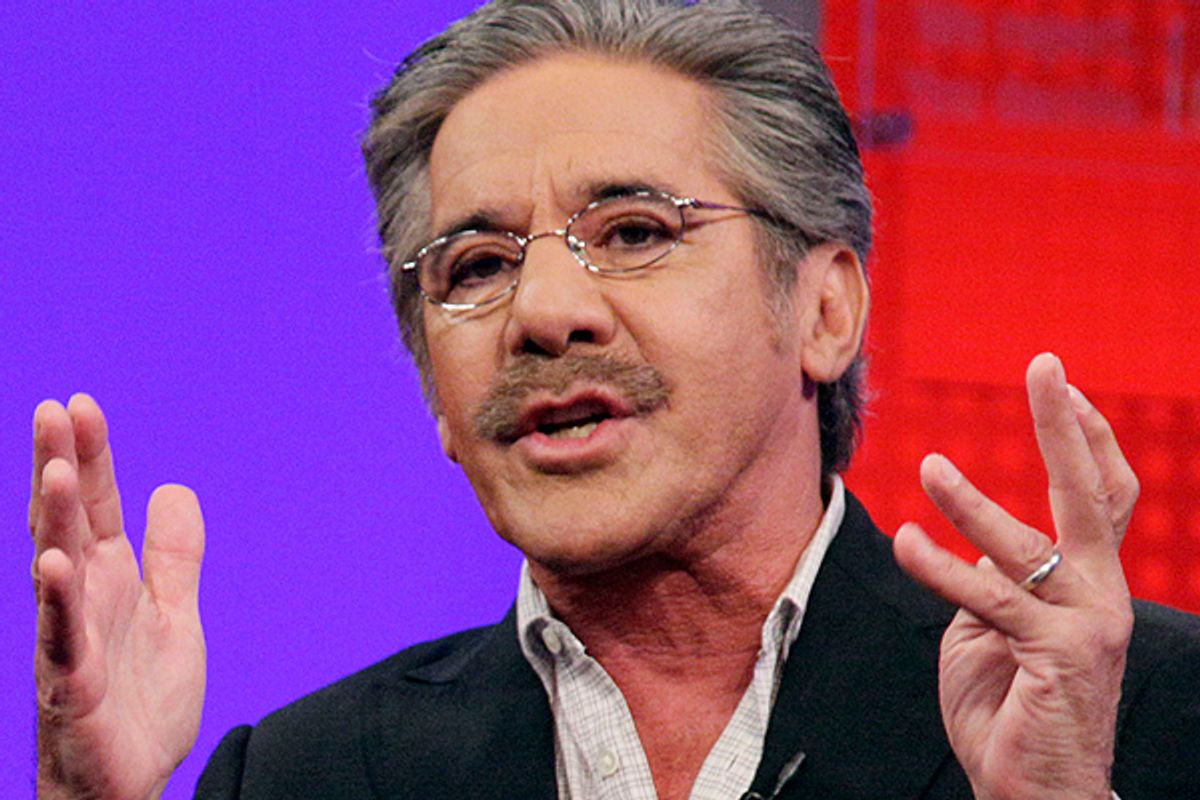 You'd better hope Geraldo Rivera never ventures into an Old Navy. He's going to freak out. In a wildly absurd, calculatedly provocative post on Fox News Latino, Rivera declared Friday that  Trayvon Martin's hoodie killed him "as surely as George Zimmerman did." Which is kind of like saying mayonnaise causes earthquakes just as surely as plate tectonics.

When the 17-year-old Florida resident died a month ago, was he wearing a lethal hoodie, one packed with explosives or poisons? No, he was just walking home from the convenience store, carrying a bag of Skittles, and attired in a manner that roused self-appointed neighborhood watchman George Zimmerman's suspicions. "This guy looks like he's up to no good, on drugs or something," Zimmerman told police. And soon after, he shot the kid in the chest.

The subsequent grief and rage over the death of a young man at the hands of an eager, 9mm-brandishing neighbor -- and the shooter's continued freedom from arrest – has sparked international outrage and an impromptu "million hoodie march." And now, the man who has given mustaches a worse reputation than the entire porn industry put together would like to offer some styling advice. "No one black, brown or white can honestly tell me that seeing a kid of color with a hood pulled over his head doesn't generate a certain reaction," he writes. "Sometimes scorn, often menace." And maybe sometimes, oh, that's my neighbor Trayvon. Rivera assumes that casual sportswear makes the man, that it dehumanizes a dark-skinned kid into a stereotype from "crime scene surveillance tapes."

Rivera, as the parent of a teen, calls this a "teachable moment." "I am begging parents of kids in Trayvon’s vulnerable demographic to heed my politically incorrect approach to this story," he explains. "If you dress like a hoodlum eventually some schmuck is going to take you at your word." It may be a well-intentioned warning: the kind of thing women have heard for decades about the length of their skirts. The only difference is that in one case, the chastisement is not to dress like a victim, and the other is to not dress like a perp.

We all have to take responsibility for the way we present ourselves to the outside world, and the way that image will be received – received, even, by dangerous, aggressive people. Geraldo is correct in saying that it's an "unfair" but an often harsh reality. And he's swaying in the direction of something true when he acknowledges that we all make instant assumptions about the people in our path every day. We have to. These are choices all of us -- both as individuals and protective parents, as those who are being watched as we walk down the street and those who are trying to keep our wits about us -- grapple with.

But he doesn't consider the nuances of a person's gait or the time, whether the individual is alone or in a group. Worst of all, Rivera (who tweeted Friday that "My own son just wrote to say he's ashamed of my position re hoodies," though "still I feel parents must do whatever they can to keep their kids safe") insists that Martin, "an innocent kid, a wonderful kid," was dressed like a "ghetto or ghetto wannabe," like "the enemy." Like "a hoodlum." Imagine for a moment that was your child. Your dead son. And some Fox moron had the gross audacity to use the word "hoodlum" anywhere near his name.

No, he wasn't dressed like a hoodlum. He was dressed like a kid. Yeah, sometimes hoodlums wear hoodies. So does just about every teenager in America. Let's be clear -- Martin was not swaggering around with a ski mask over his face and a knife in his hand. He was a kid who had thrown on a jacket on a rainy night. He was not, as Geraldo says, "wearing a costume that is really a sign that says 'shoot me,'" any more than a woman in heels is wearing a sign that says "rape me."

What happened to Martin was a tragedy. One that, unfortunately, probably had considerably less to do with the clothes on his back than the color of his skin. Rivera's simplistic assertion that Trayvon "would be alive today but for his hoodie" is at best incredibly naive, and at worst, suggests that an unarmed young man was a participant in his violent death. The way to protect innocent individuals from being ambushed isn't by telling them to dress differently. Because they're not the ones who need to change.

Update: Thank you, Internet. You managed to come up with the best and somehow most inevitable response to Rivera's absurdity: Geraldo in a hoodie.