All for none and none for all 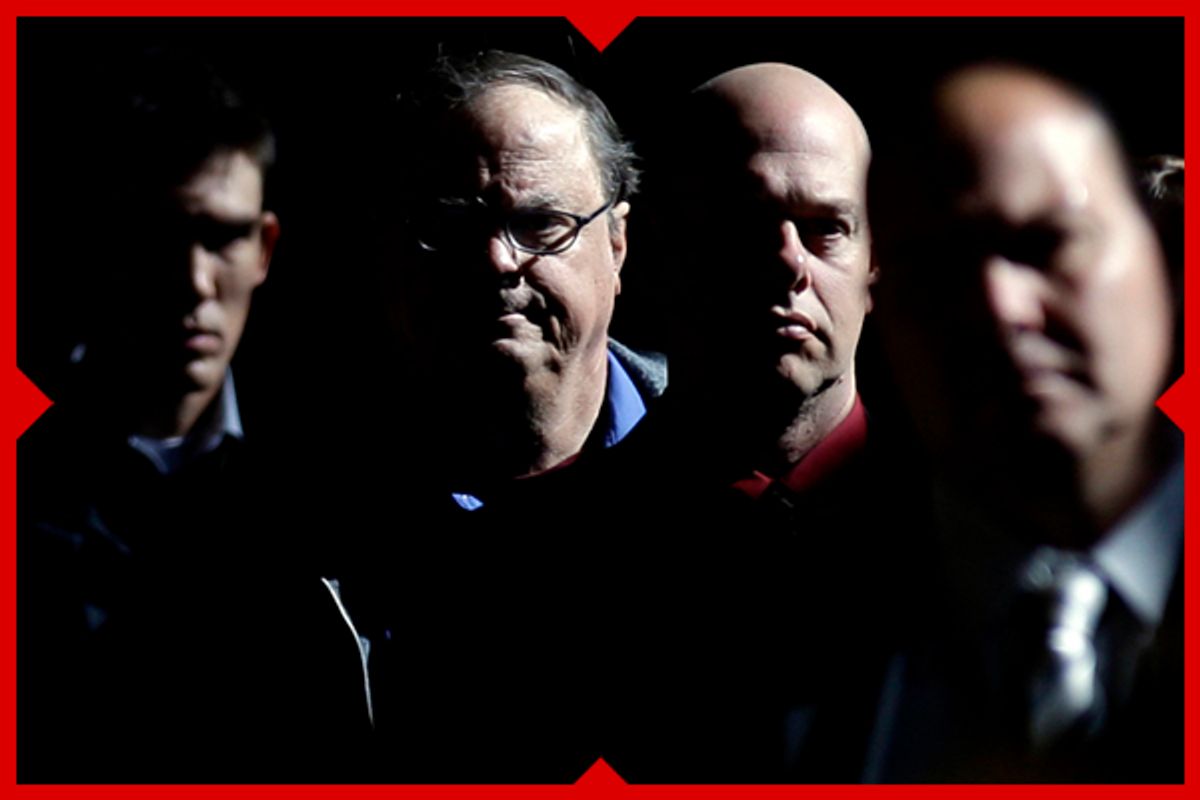 My March 4 post "What's the matter with white people?" was Salon's top story that week, and it got a lot of comments and online attention. I went on vacation a few days later, but I've wanted to address a few arguments, if belatedly.

I asked "What's the matter with white people?" because my people are increasingly coming under fire from the right and the left. Republicans have begun to blame not the economy but "dependency" on government and rising rates of single parenthood for the economic troubles of the white working class. On the left, meanwhile, whites are dismissed as the backward base of the increasingly radical GOP, and working class whites, in particular, are derided as racists who won't vote for Democrats because the party is now led by a black man (ignoring the fact that a larger share of working class whites voted for Barack Obama than for Caucasians John Kerry, Al Gore or Bill Clinton.)

The fact is, working and middle class whites have supported too many Republicans who've dismantled the opportunity structure that created the vast (white) middle class from the 1930s through the 1960s – but that's at least partly because too many Democrats turned their backs on those policies, too. The larger point of the piece, if a 4,000-plus word article can be said to have a single point, was this:

The emerging multiracial Obama coalition has the potential to transform the way we all think about race and politics as we invent the next America — but only if we can all forgo petty racial score-setting and 20th century conceptions about identity. And only if more white people wake up to what they’ve let the Republican Party do to the country in the last 40 years, in the name of holding on to what they think they have.

I was making two related arguments: that whites must begin to face up to economic and political reality – that the party most of them support now stands for destroying not only the social programs they (incorrectly) believe benefit "other people," but also programs they support, like Social Security and Medicare, food stamps and unemployment, as well as protections for workers who have jobs. My second point was just as important and less commonly heard: I asked that the multiracial left have more empathy for working class whites, and stop stereotyping them and dismissing their political choices, when we disagree, as merely "racist." Interestingly, I got little or no push back on that point from anyone on the multiracial left, although I have been criticized for that argument many times, going back to the fractious 2008 Democratic primary. Maybe we're making progress.

The criticism of my "White People" argument came almost exclusively from the right, and there were at least a few points worth engaging.

Of course, more than a few people reacted to the headline without thinking (or reading the piece), and I heard a lot of what I predicted I would in the article: I am a racist! How dare I generalize about white people? I would never talk about black people that way!

The best response along those lines came from Newsbusters, the fan club Brent Bozell runs especially to promote me. It featured a typically outraged harangue from Noel Sheppard: "Actual Joan Walsh Salon Headline: 'What's the Matter with White People?"  and included this: "Maybe Walsh should check her own racist leanings given her hatred of white people." Noel, I love white people! Some of my best friends are white. As I even revealed in the piece, that includes some of my own family. You can do better, Noel. Try again.

The reply from the Wall Street Journal's James Taranto was a little bit more substantive – although he kicked it off on Twitter by shrieking at Charles Murray that I'd accused Murray of "attacking white people!"

I didn't accuse Murray of "attacking" all white people. I'd made the point that Murray now blames poor and working class whites for their economic struggles, much the way he has always blamed the black poor. Their poverty rate is climbing while their wages and family incomes are falling not because of huge shifts in the economy that favor the wealthy, but because they're lazy and promiscuous and not terribly bright, and they just don't follow the rules the way the poor are supposed to. This is the oldest argument around, of course, when it comes to explaining away social inequity and defending the economic status quo. You can find it in the Gospels, in clashes between that bleeding heart liberal Jesus Christ, and those who believed poverty was God's punishment.  In every age, the struggle for justice turns on how successfully the privileged can justify their wealth as the natural result of their hard work and superior talent and/or the innate shortcomings of their lessers.

In my lifetime, that argument has been racialized. As the nation struggled to right the wrongs of racism, some people began to argue that the problems of poor African Americans had more to do with their own personal and cultural shortcomings than society's, and that our efforts to use government to help made the problem worse.  But I was raised knowing that virtually every awful thing said about black people had once been said about Irish Catholics, and so I've spent a lot of my life refuting that racialized scapegoating, sometimes successfully, sometimes not.

Lately, though, I've felt that we're getting some help with that task from Republicans, as they scapegoat working class whites in terms they used to only use against blacks -- their economic problems are due to the fact that they're lazy, too many don't get married and they want government to take care of them (Charles Murray's argument). Taranto misunderstands the point I'm making about the new GOP line:

When Walsh accuses Murray of "attacking white people," she seems to be hoping that persons of pallor will be open to a similar appeal--that they will finally wake up and start voting what the left considers to be their "interests." Essentially that means embracing government dependency: "Today, many white folks who are voting Republican don't seem to know one important fact: they are, in fact, the 'takers.' " Once they figure that out, Walsh thinks, they'll join the blacks and the Hispanics and the professional elite, and the Democratic hold on the electorate will be secure.

That's not what I was saying, at all. I'm not someone who makes the simplistic case that the working class is voting against its interests by backing Republicans. This is a debate in which I think the right has the better side. Claiming that working class Republicans – or black and Latino Republicans, for that matter -- are "voting against their interests" is hugely condescending, a vestigial Marxism that assumes the only thing that matters is material conditions. It can also sound like we're saying: "How dare you presume you have anything in common with the wealthy, peon?"

The Republican allegiance of some working class people may well be aspirational, as conservatives argue. Liberals like John Rawls' famous theory of justice, which held that most people would want to design a society in which, should they find themselves at the bottom, they would be protected. It turns out that a lot of people prefer social policies that would protect them if they make it to the top, however unlikely that kind of economic mobility is turning out to be in the U.S. today. Voting Republican may also reflect genuine cultural and religious values. Growing up Irish Catholic, I can't pretend that my relatives who vote Republican over the issue of abortion are dupes suffering from some kind of "false consciousness." They care about that issue passionately. We can disagree with conservative working class white people, we can wish they had different priorities, but when we "assume" they're voting against their own interests, as though we, not they, know their interests, our condescension shows.

On the other hand, I do not mean to disrespect working class whites, but I have to say: it would be great if their politics reckoned with reality. As I pointed out in the piece, red-state Republican areas enjoy the highest levels of federal spending. That's an inconsistency that can't be totally explained by culture war politics. White working class Republicans are simply wrong about the way government has worked, in their own lives and in the lives of others, and Democrats need to talk about that, respectfully.

Taranto hints at the case other Republicans make more forcefully – that the more Americans become dependent on government, the more they'll vote Democratic, and that's Barack Obama's not-so-secret plan. "Republican supporters will continue to decrease every year as more Americans become dependent on the government," Tea Party Sen. Jim DeMint wrote in his last book. "Dependent voters will naturally elect even big-government progressives who will continue to smother economic growth and spend America deeper into debt." I think DeMint's notion is alarmist GOP propaganda. But I'd be happy to have a political debate about the role of government in our lives – one that's untainted by racism, fears of a lazy, parasitic "other" or charges that Democrats are "socialists" seeking to impose some Soviet-style or lefty-European system on America. I think it should be clear that Democrats love capitalism, because twice in the last 75 years, under Franklin Delano Roosevelt and then under President Obama, we saved capitalism from itself.

Finally, Taranto (and a lot of letter writers who didn't seem to read my piece), claimed that the "demographic doomsday" scenario, in which a declining white population leads to the gradual extinction of the GOP, is "overblown."  I agree – and I said so in the article. I regularly quarrel with liberals who insist that a magical "people of color" alliance is going to move the country to the left, permanently. It's not going to happen. In the 80s and 90s, it was easy to imagine that Latinos and Asians might be receptive to Republican messaging around family, small business, religion, as well as hostility to big government, given that immigrants often came from countries ruled by oppressive governments (whether of the left or the right). Certainly Karl Rove once believed that. Republicans chased many Latinos, Asians and even conservative African Americans into the arms of Democrats by allowing racism and xenophobia to flourish in their party unchecked. As the GOP gets beaten in coming election cycles, it's going to have to figure out a way to appeal to more than just white people -- or perish as a party.

Also: most scenarios in which the white majority "disappears" in the next couple of decades ignore the fact that about 50 percent of the fastest-growing "minority" – Hispanics or Latinos – consider themselves white. (That's why the Census has a category for "non-Hispanic whites.")  So do most mixed-race Americans in many studies. Besides, the definition of "whiteness" has regularly shifted throughout American history – Irish, Italians, Jews and other non-Nordic, Anglo immigrants all took turns in the "non-white" category in the 19th and 20th centuries. It's quite possible that our notion of whiteness – or let's just say "the American mainstream" or "real Americans," in Sarah Palin's language – will expand to include some categories of Latinos, Asians and mixed-race folks, not to mention Clarence Thomas, Herman Cain and Condoleezza Rice.

To build a better, more inclusive country – to invent the next America – both parties are going to have to forgo identity politics and appeal to voters around principle and policy, not fear and contempt. Democrats are getting there; Republicans still have a ways to go before facing up to the fact that the identity politics practiced by the Tea Party represents a divisive dead end.