From Watergate to WikiLeaks 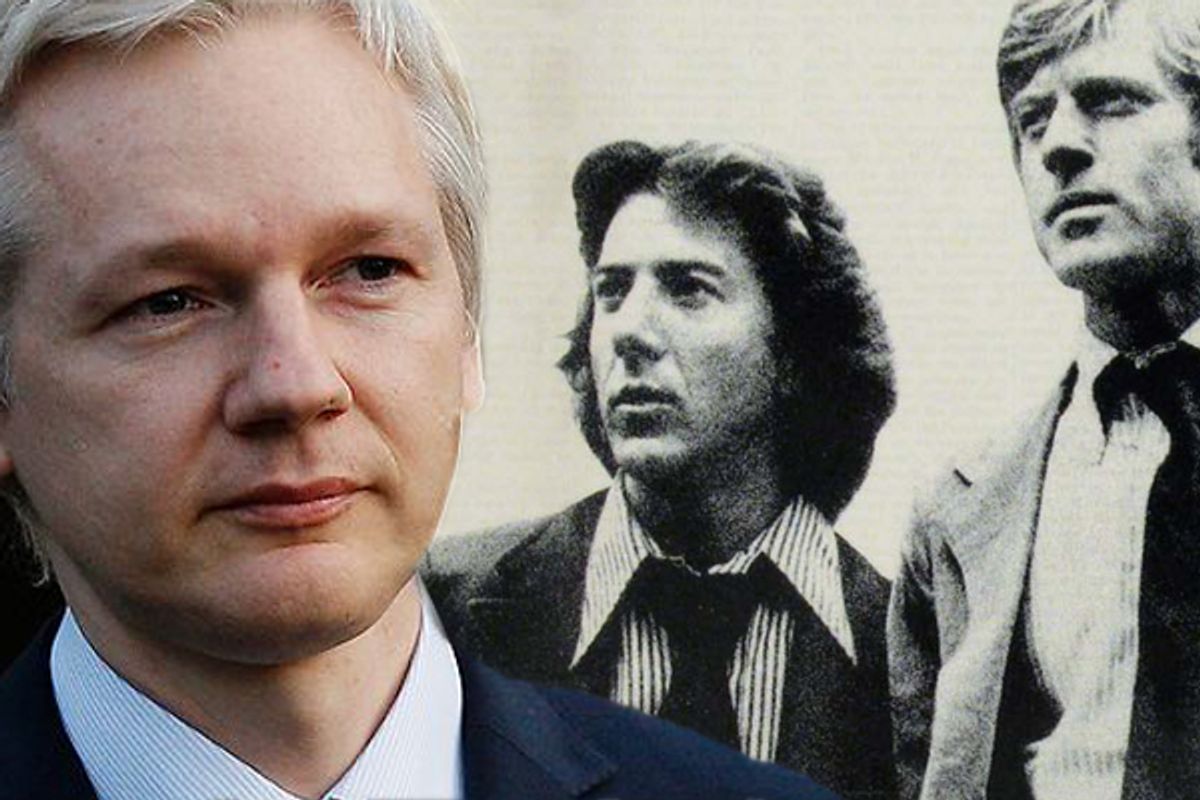 In the movie "All the President's Men," the shadowy high-level source known only as Deep Throat tells Washington Post reporter Bob Woodward, "Follow the money." The fact that this never happened — the words were invented by screenwriter William Goldman — detracted little from the scene's power or the movie's influence. It encapsulated a romantic myth of journalism: An intrepid reporter finds a wise whistle-blower who schools him in the abuse of power. In the movie and political memory, the top-level source enabled the crusading reporters to bring down a corrupt president.

That myth died in May 2005 when Vanity Fair revealed that Deep Throat was Mark Felt, a former acting deputy director of the FBI, who, it turns out, was quite comfortable with the abuse of power. After the Watergate saga, he was convicted of authorizing illegal break-ins. Now, Max Holland's ingenious new book, "Leak: Why Mark Felt Became Deep Throat," reconstructs how Felt used Woodward and the Post to advance his true agenda, which Holland argues convincingly was not doing justice but becoming director of the FBI.

At its best, this "dandy" book (critic Jack Shafer's word) illuminates an underappreciated reality of Washington: journalism's role in the clash of factions within the U.S. government. Holland sets the Watergate story in the context of what historian Stanley Kutler calls "the war of FBI succession." This was the power struggle that erupted after the death of longtime FBI director J. Edgar Hoover in May 1972. When the Watergate burglars were arrested six weeks later, Felt started slipping tidbits of information to Woodward, a 30-year-old reporter in the Post Metro section who, by his own admission, had been sucking up to Felt for close to two years.

Felt, says Holland, aimed to discredit acting director L. Patrick Gray, and enhance his own prospects of eventually getting the top job. In other words, Felt wasn't talking to Woodward to see justice done. He was trying to screw his rivals for the sake of getting a promotion.

Portraying Felt/Deep Throat as a factional power player, not a high-minded voice of truth, is a public service. But Holland goes too far in deprecating the accomplishments of Woodward and Carl Bernstein. He develops the argument first made by Edward Jay Epstein that the Post got too much credit for exposing the criminal conspiracy emanating from Nixon's White House.

"Contrary to widely held perception that the Post uncovered Watergate," Holland writes, "the newspaper essentially tracked the progress  of the FBI's investigation with a time delay ranging from weeks to days, and published elements of the prosecutor's case well in advance of the trial." From the leisurely perspective of a historian that may be convincing. For  working journalists, the publication of a story days or weeks in advance of the government is the whole point.

Nevertheless, “All the President’s Men” embellished Woodward’s and Bernstein’s fine job to an act of moral heroism. The film reassured viewers that the good guys could win with the help of a wise man on the inside. Any young person who is inspired to do journalism by "All the President's Men" should also read "Leak." The romantic myth of journalism is dead and that's a good thing.

But the need for good journalism is still dire, and the lessons of Holland’s book are as relevant as ever. Consider the ongoing struggle over U.S. policy toward Iran's nuclear program and how its factions see the press as tools for power. One faction, centered in the White House and the Pentagon, favors diplomacy and sanctions. The other faction, strongest on Capitol Hill, favors the Israeli point of view that the time for military action is coming.

Both sides leak classified information — a National Intelligence Estimate here, a report from Iranian dissidents there — to justify and fortify the policy they favor. The leakers of this information seek to advance their favorite policy, while reporters seek to educate the public -- or so they say.

The possibilities for corruption in this relationship of mutual exploitation are obvious. Conservatives and radicals note, with some justice, that liberal reporters who claim to stand independent of the power struggles they cover may merely be  serving the faction of their choice. Liberals note, with some justice, that conservative reporters are prone to that very same problem.

During the run-up to the Iraq war, the pro-war faction in the White House and Pentagon leaked closely held (and completely unfounded) information to New York Times reporter Judith Miller. Their purpose was not rhetorical but practical. Miller's scoops were not only intended to influence public opinion; they were also intended to discredit the go-slow faction in the State Department and CIA and justify their case for war in the administration's war councils. Some say Miller "fell in love" with her sources, though her subsequent move to the conservative think tank suggests that she may have aided the pro-war faction out of conviction.

Woodward faced similar criticism for his post-9/11 books "Bush at War" and "Plan of Attack." While not as credulous about sources as Miller, Woodward did portray the Bush team in ways that now seem generous, if not misguided. A third book on the Bush administration, 2006's "State of Denial," was tougher, but the limitations of Washington journalism keyed to the thoughts of high-level sources never seemed more evident.

Not coincidentally, the spread of digital media has also undermined the romantic self-conception of journalism. It was no coincidence that the myth of Deep Throat was dying at the same time that WikiLeaks emerged as a journalistic force. For those interested in truth-telling, Julian Assange offered a whole different perspective on the clash of factions in Washington: a pox on all their houses. Journalists should not shuttle between policymakers talking sotte voce in pursuit of leaks, Assange said. They should oppose all factions within the secretive national security state and seek to disrupt their policies.

As the reach of the national security agencies grows so does the need for vigilance about their activities. WikiLeaks now describes itself as a news organization, a hub for hackers/reporters with new information about the inner workings of the government. And yet Julian Assange is now running for Senate in Australia. Journalism may change but the clash of factions is eternal.