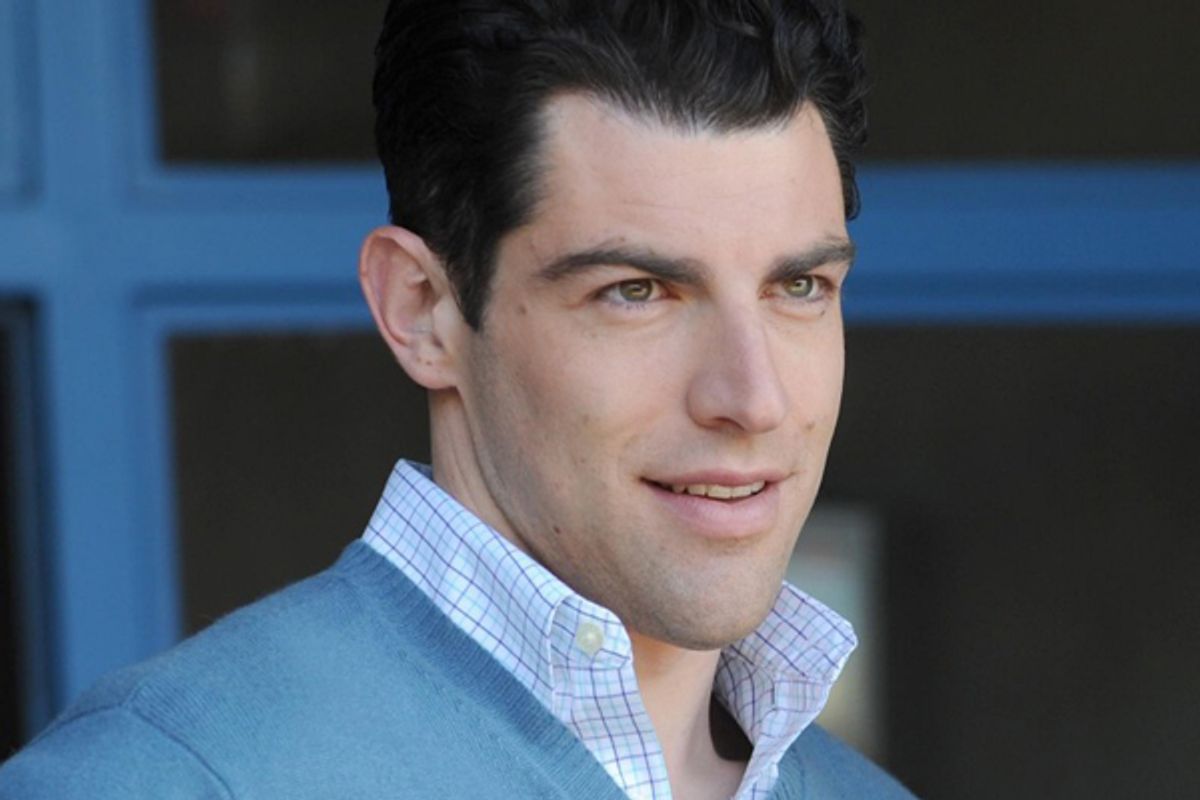 In a recent episode of “New Girl,” Zooey Deschanel’s Jess Day contrived to make her high-strung roommate Schmidt (Max Greenfield) less Schmidt-y. Schmidt is a sort of self-created alpha male with a collection of beta male qualities — uptight, controlling, the cooking, cleaning apartment den mother, and so metrosexual he wears "hair chut-e-ney" and owns a pair of "driving mocs." He embraces these predilections with such conviction they congeal into a sort of deranged machismo, one slathered in sandalwood-scented lotion.

In the episode, called “Control,” Jess wanted to bring a wardrobe she found on the street into the house. Schmidt, in charge of house décor, refused. (“Get rid of it, Jess. Pine has no place in this loft. It's the wood of poor people and outhouses.”) Trying to keep her pine, Jess took Schmidt to a drum circle in Santa Monica hoping the bongo-playing hippies would inspire Schmidt to de-Schmidt himself. They did. Schmidt quickly forwent shoes, hair product and sweating the small stuff.  Just as quickly, the apartment Jess and Schmidt share with two roommates became a shambles, a disgusting hovel with dishes piled high and garbage littering the floors. The old, obsessive Schmidt made the roommates' lives work, a service he also performs for “New Girl” itself.

When "New Girl” began in September, it was a show about the loopy, doe-eyed Jess Day and her three male roommates. Jess was the top oddball, overly childish, occasionally idiotic, prone to sobbing, liable to break things and incapable of saying the word "penis." As the series has matured, the wealth of weirdness has gotten spread around. Jess has become marginally more normal, and the dudes she lives with have become less so. You no longer wonder why the three guys put up with her: They put up with her because they are just as strange, a makeshift family of 20-somethings almost, but not quite, crippled by their quirks.

As part of this transition, Schmidt has gone from being a douchebag in the classic model — a guy who, in the pilot, constantly wanted to show off his pecs and scam girls, and seemed capable of doing so — to a douche of a more unique variety. He's the aspirational douchebag, the tightly wound, formerly fat mama’s boy trying his hardest to be a bro. In the process, he's become the show's breakout character.

As Schmidt, Greenfield's impeccable, preeningly overconfident delivery contains an element of realistic performativeness. Schmidt is the guy who says something he thinks is funny and looks around to see if anyone laughed; but he’s also the guy who says something inadvertently funny and has no clue. He is hyper-aware and yet oblivious, a good guy trying to be worse, one extremely anxious about his social standing and yet unconcerned about announcing he owns an Irish walking cape and keen to seduce a girl by talking endlessly about cheese. He is insecure about all of the wrong things. He is the guy obsessed with seeing his best friend Nick’s penis because his other roommates already have.

Caring about everything too much, including the size of Nick's penis, is what makes Schmidt more than just "New Girl's" breakout character, but a breakout 20-something archetype. Schmidt is not like his two sweet, lost roommates Nick (Jake Johnson) and Winston (Lamorne Morris) or any of the other fumbling men-children popularized by Judd Apatow. In his own way, Schmidt is just as clueless, but his cluelessness does not manifest itself in resignation, in quitting law school, in smoking weed, but its opposite. Unlike these guys, Schmidt is a dervish of caring. He cares so much. He wants so much. He is not apathetic about anything. He has strong opinions not only about pine and omelets and towels and jobs and clothes and what his friends think and his new, secret girlfriend Cece, but, presumably, everything else in the universe.

Caring is, of course, the enemy of cool, which is why all Schmidt's peers are so loath to do it, and why Schmidt, try as he might, can't be cool. But caring is not the enemy of adulthood (just ask Ron Swanson and Jack Donaghy). And unlike those other slackers, Schmidt already has the skill set to be a grown-up, he just has to learn how to use it properly. As Schmidt struggles to be a bro while wondering about the location of his good pea coat, it's easy to see the guy he will be in 20 years, the one who adores his wife and children -- a family that humors him and his weird propensity to make up silly names for everything while forcing them to eat huge meals and laughing at his own jokes. Maybe he won't be cool, but he will be happy. Let's all laugh at him while we still can.