Where are the normal Christians?

On the news, people of faith -- like me -- are cast as lunatic right-wingers. But we're not all like that 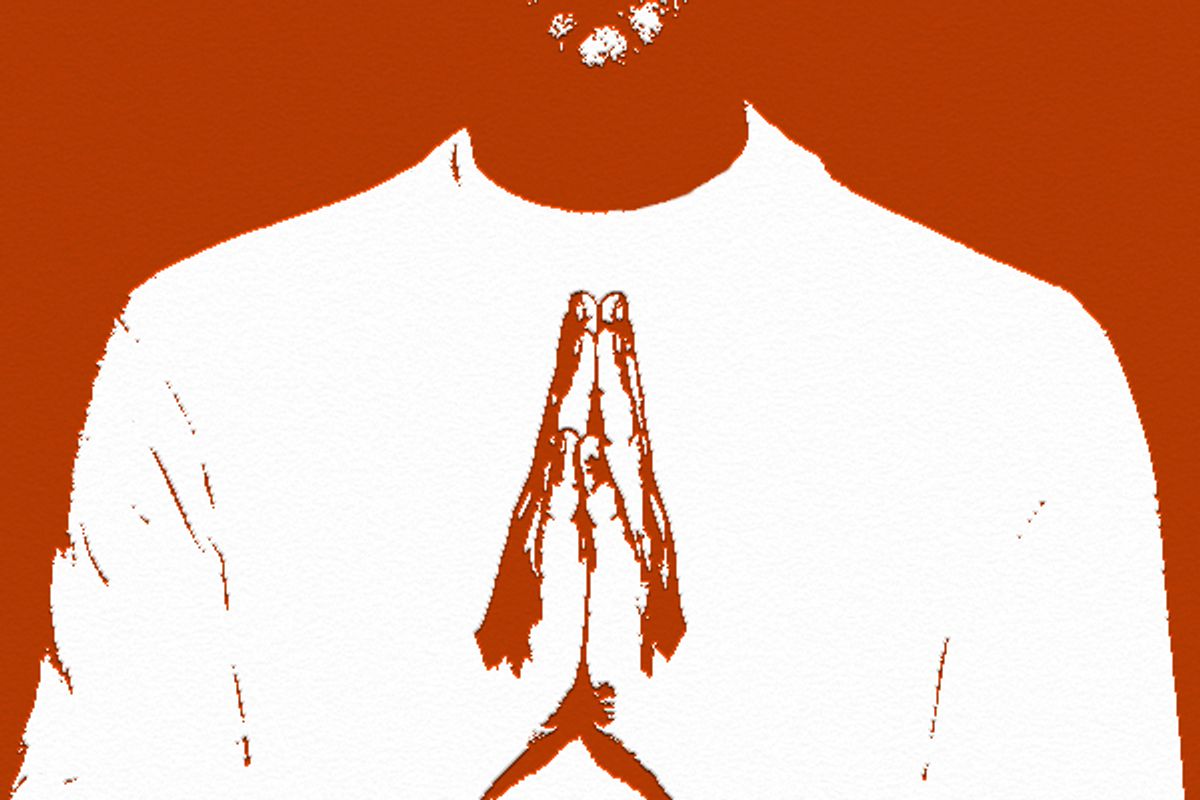 You see them on the news every night. Extremists. Hate groups. The lunatic fringe. And you cringe every time some new radical or abusive psychopath makes the papers again, because you know that strangers and even friends are going to be wary of you now. You suspect they're afraid you're like that too. You feel caught in the crossfire between the frightening, hateful fanatics who call themselves by the same name you do, and the bigots who tar you all with the same brush. You're a Christian.

"The bad news is that we're all part of the same body," says Amy Laura Hall, an associate professor at Duke and the creator of Profligategrace.com. "The bad news is that somebody like George W. Bush and I are part of the Methodist church, and he's condoning what I and many in the community say is torture. But the good news," she continues, "is we're part of the same body. Therefore we have a responsibility to keep engaging in political discourse, and conversation with people on all opposing sides." Not that it doesn't get exhausting, battling the scorn from both within and without.

As a practicing Catholic, I have lived my entire adult life being skeptical, questioning and critical of the backward policies of my institution, and the horrific crimes committed by its members and perpetuated by its authorities. These days, I figure most people associate my religion with child molesters and Rick Santorum. But I have stuck with my faith – albeit a very different one than the traditional image of some papal ring-kissing, birth control-hating freak that tends to get more attention -- because the values I learned directly from a Christian upbringing are the values I still try to apply to my life every day. And if you, as either a conservative Christian or a staunch nonbeliever, think that's easy, it isn't. It's a struggle. But it's an often wonderful struggle.

It's hard to forgive people when they screw you over. It's hard to not be materialistic or petty. It's hard to follow the command to love your neighbor. You don't have to be a Christian to get those ideals and to practice them, but if faith is the means by which many of us choose to express our values, it also doesn't automatically make us all sheep, taking orders from some imaginary white-haired man in the sky.

"Christianity is the stream in which I was cast. It makes sense to me," explains Paige Baker, the wife of an Episcopalian minister in North Carolina. But that doesn’t make it simplistic. "I am drawn by the transcendent. I find something magnetic in Christianity, something that calls me and draws me in despite my own doubts and questions and the days when I think, Why do I even bother?" she says.

And that's what turns her outward to her community. "My political activism is totally rooted in my faith," she says. "I don't see how you can read the gospels and not be a progressive. How can you read Matthew 25 --  'Whatever you did for one of the least of these brothers and sisters of mine, you did for me' -- and not think all these people who are so sure that we're supposed to be totally responsible for ourselves are wrong? This bootstrap mentality is so not Christian." But she knows that's the kind of Christianity that makes headlines. "What's exciting about saying that our church welcomes LGBT families?" she asks. "What's exciting about having a community garden where we donate part of the yield to the local food bank? But we do it because that's what we're supposed to be doing. Not all Christians are fire-breathing, women- and LGBT-hating evangelicals."

My friend Phoebe, a Quaker who lives outside of Philadelphia, echoes those ideals. "I bristle at the notion that there's only one truth. I don't feel that there is. But this is a truth that I'm comfortable with." And she adds, "I feel like there has been a hijacking of Christianity by some very powerful Christians who preach greed and pride and are very comfortable condemning other people. The struggle for Quakers is that so much of it is quiet. There needs to be a movement that is loud and that is humble."

I agree. Because while it's lovely that Frank Bruni can write a thoughtful, much-forwarded opinion piece on a Catholic college dormmate who wound up becoming a passionate defender of women's health and an abortion provider, it's sad to see the man's assertion that "too many religious people … speak of life's preciousness when railing against abortion but fail to acknowledge how they let other values override that concern when they support war, the death penalty or governments that do nothing for people in perilous need" go utterly unchallenged.

It's even sadder when someone like Richard Dawkins turns a well-intentioned weekend rally for atheism awareness into, in his words, an opportunity to "ridicule and show contempt" for religious traditions. At the rally, marchers chanted sentiments like "Evolution is not just true, it's beautiful." Hey, I like evolution too! I learned all about it in Catholic school. Over 78 percent of Americans profess to be Christian. And if you're so certain we're all Darwin-disputing Kirk Camerons, don't pat yourself on the back for the sharp reason and open-mindedness there, pardner.

Says Phoebe, "I have family members who feel very rejected. They're environmentalists and artists, and they feel alienated by what they perceive as Christian bashing. I think that's a shame. A lot of these people who love to mock Christians don't realize that they're being ignorant. They're not looking at the nuances of us. It does religion such a disservice, because there is something very beautiful in belief."

I've experienced that beauty and comfort and community in my own life, time and again. This past weekend, I attended Baptist services with my children to mark the first anniversary of their grandfather's death. The church, by the way, had been vandalized earlier in the week, defaced with an ugly splatter of paint across the front door. There is just way too much stupidity and anger out there.

After services, I chatted with the youth minister about Christianity's current image problem. "Oh, you mean the whole 'If you don't agree with everything I say, you're going to hell' thing?" she asked. "Yeah, that gets old." And my mother-in-law, a retired minister, agreed. "Certainly traditional Christianity talks about judgment," she said. "But I think the stronger emphasis in the Bible is love and grace. Some of the last words Jesus spoke were of forgiveness. That's my faith." And she added that it's a faith that we as Americans are supposed to enjoy without ramming down anybody else's throats. "Roger Williams left Plymouth because he didn't want to adhere to all the dictates imposed on people by the Puritan group," she said. "When the state and the religion became the same, he fled. He established the basic principals on which our country was founded -- the freedom of religion and the separation of church and state."

To be a Christian doesn’t automatically mean to be free of doubt. If you are completely certain you've got the whole God thing figured out, either as a Christian or an atheist, I suspect we don't have very much to say to each other. Plenty of us wrestle with both existential big questions and institutional outrage on a consistent basis. Yet there's something in the philosophical tenets of the Christian faith that still speaks to us. That's not the product of rote genuflecting or parroting something a moron like Rick Santorum pulled out of his posterior. Instead, it's something we recognize more in the hypocrisy exposing and sanity restoring of sometime Sunday school teacher and admitted "functioning Catholic" Stephen Colbert.

Jonathan Reynolds, who does musical direction and social outreach at a new interdenominational church in my neighborhood, understands that religion is inherently fraught with thorns. "It's man's natural inclination to screw up," he says. "We want to judge people to make up for our self-esteem issues." And institutions can be a great place for those flaws and abusive tendencies to ripen. "The church has become an edifice, when it's meant to be a community of people sharing each other's burdens." But, he adds, "Where my faith gets practical and meets the road of life is when I reconcile it with my rationality. God makes sense to me. At the end of the day, do I have answers that make me feel warm and fuzzy? No. Look at what happened to half the people in the Bible -- they did not have a good time of it. I'm cynical and critical, but nothing else makes as much sense as grace and love. It's so stupidly simple and so complex."

Grace and love -- that's it in a nutshell. That's why it was jarring when a friend introduced me once to a group as a "recovering" Catholic, assuming my belief system was something to be gotten over. That's why it was so hurtful when a fellow mother marveled to me, in the presence of our children, "You seem so smart. How can you be a Christian?"

"There's an assumption that if you're educated you'll eventually grow and mature out of your faith," Amy Laura Hall admits. "But there's so much of a larger and richer conversation to be had about what it means to be people of faith, to seek justice and peace in our families and communities. I can't stay politically engaged without hope. I just can't do it. Without hope, what I see around me is all there is. I can't move forward steadily and with resolve without my faith."

I can't either. More significantly, I don't want to. I'm not out to convert anybody. And though I'm raising my children with our prayers and religious traditions, I'm also constantly challenging them to ask questions, express their doubts and figure things out for themselves. I'm trying to bring them up -- in the truest sense of that phrase - in a community where we're all free to look at the universe differently, as Christians and Jews and Muslims and atheists, without derision.

At a reading earlier this week, the author Stephen Elliott said something to the assembly that resonated deeply for me. He said, "Your truth is different from my truth. And we're both right." In a culture of arrogance and self-righteousness on either end of the dial, it's a tough concept to embrace. But coexistence is only possible when we're not screaming at each other, smugly pronouncing the other guy either sinful or stupid. All that many of us, as non extreme Christians, want is to simply be treated with the same respect and tolerance that our faith teaches us to give to others. Because whatever else we all believe, how can we ever go on as a diverse, thriving culture if we don't believe first in each other?