Can the Florida senator steer the presumptive GOP nominee away from from immigration hard-liner Kris Kobach? 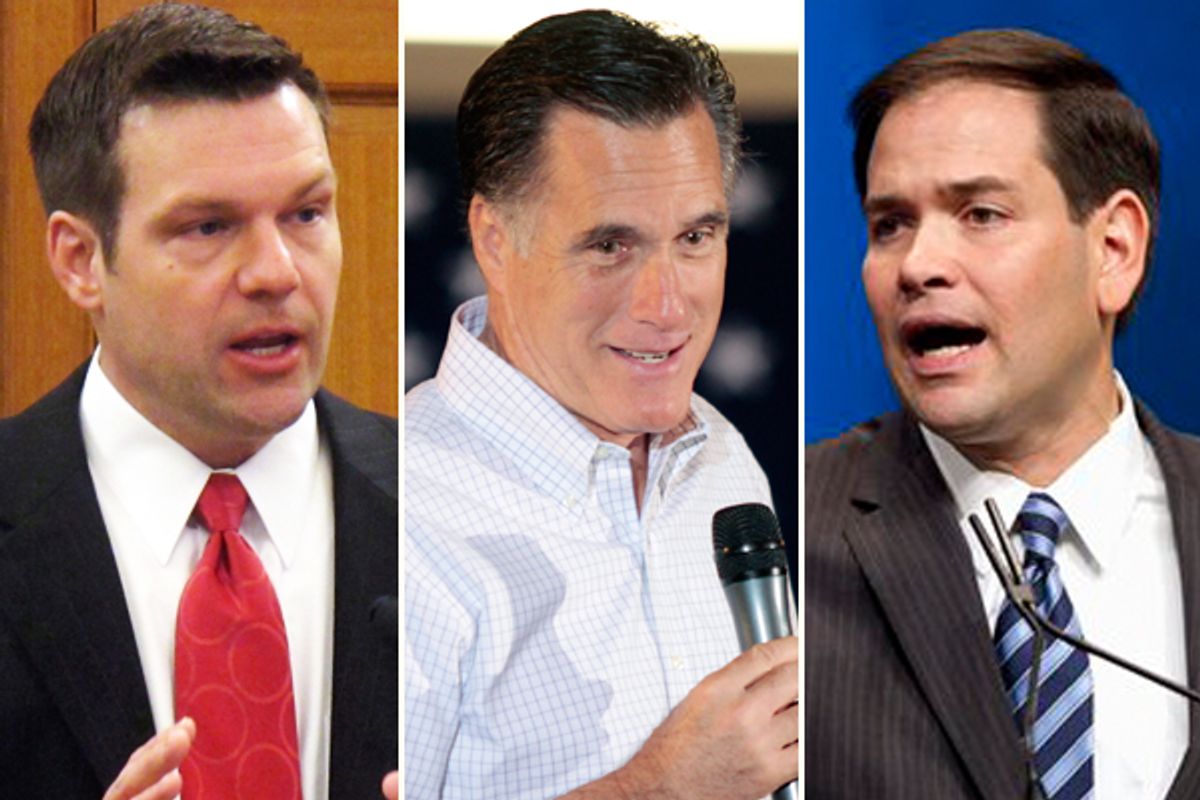 The premature speculation about Marco Rubio as a possible vice-presidential candidate (efficiently spiked by political scientist Ann Coulter) obscures the Florida senator's entrance into a more interesting and significant 2012 contest: the campaign for Mitt Romney's ear on immigration.

Rubio joined this contest last week by endorsing Romney and then sitting down with National Review Online, NewsMax, Politico, Geraldo Rivera, and Fox News, to propose a new direction in U.S. immigration policy: a GOP-style DREAM Act to reward high-achieving high school students who are illegal immigrants. While the Democratic-sponsored DREAM Act promises U.S. citizenship to good students, Rubio says he and other Republican are exploring some other tangible reward short of citizenship. He told NRO:

I think the vast majority of Americans understand that if you were four years old when you were brought here, you grew up in this country your whole life, and you’re now a valedictorian of a high school or are a high-achieving academic person, and have much to contribute to our future, I think most Americans, the vast majority of Americans find that compelling and want to accommodate that.

It was a signal that the first-term Cuban-American lawmaker wants to modify the party's "enforcement first" orthodoxy on illegal immigrants to the United States. Rubio also distanced himself, every so slightly, from Arizona's controversial law targeting illegal immigrants that Romney has endorsed. Rubio told Juan Williams the measure "is not a model for our country."

For Democrats, Rubio's statements were just so much eyewash. Maddow blogger Steven Benen dismissed the proposal as a "DREAM Act without the dream," but Capitol Hill Democrats cared enough about  the initiative to have Majority Leader Harry Reid rip the idea (without mentioning its sponsor) in a Sunday Op-Ed for Rubio's hometown Miami Herald.

For pro-immigration Republicans, Rubio's gambit is a long shot. In the race for Romney's ear, Rubio starts out far behind the current front-runner, Kris Kobach, the Kansas secretary of state who is the most effective immigration restrictionist in American politics today. The author of the Arizona law and a similar one in Alabama,  Kobach endorsed Romney in January and signed on to the campaign as an advisor. He is the foremost exponent of Romney's avowed policy of "self-deportation" for illegal immigrants. Kobach told Salon in February that he believed aggressive enforcement of existing immigration laws could persuade 5.5 million people to leave the country "voluntarily" by the end of Romney's first term in 2016. If that unprecedented exodus occurs, most of the people coerced into leaving will be Hispanic.

Rubio's only advantage is that Kobach's approach has helped drive the standing of the Republican Party among Latino voters to an all-time low and thoroughly spooked some Republican strategists. A Fox News poll earlier this month showed Obama winning 70 percent support among Latino voters, compared to just 14 percent for Romney. At the same time, the Latino vote has surged upward from 2008 levels in the swing states of New Mexico (14 percent), Colorado (15 percent), Arizona (23.2 percent), and Florida (34.5 percent), according to the National Association of Latino Elected and Appointed Officials. Those numbers, Politico reported last month, have several leading Republican senators including Jon Kyl of Arizona, Kay Bailey Hutchison of Texas, and Saxby Chambliss of Georgia fearing a "Latino revolt" against the party on Election Day.

"Rubio is one of the folks who are trying to moderate the GOP position on immigration," says Roberto Suro, a professor at the University of Southern California. "They've managed to get everybody in the party scared and they have a point. The latest poll numbers are amazing."

In November, nearly 22 million Hispanics will be eligible to vote, an increase of more than 2 million from 2008, Suro notes. In 2008  Sen. John McCain won about 31 percent of the Hispanic vote and lost badly to Obama. In 2004, George W. Bush won 40 percent to 44 percent of Hispanic voters and was reelected.

"If Romney is at 20 to 30 percent among Latinos, Obama's chances of holding the White House are much, much better," says Suro.

"Romney is going to start pivoting on the issue," he predicted. "Rubio speaks for a group of people who are hoping they can push the party more toward the center. But how much can Romney move? A lot of people are going to be watching."

For immigration restrictionists, Rubio's proposal amounts to another variation on "amnesty," says Ira Mehlman, spokesman for Federation for American Immigration Reform. "Republicans are looking back nostalgically to the time when they got 40 percent of the Latino vote. It's not likely to happen," he said.

What Rubio lacks, compared to Kobach, is substance. In talking to Newsmax Rubio tried to cast his position in terms of conservative ideology.  "People from Latin America come here to get away from the failed economic government policies of places like Venezuela and Cuba. They come here because big government doesn’t work.”

This may work in the blogosphere but it seems detached from the reality of most immigrants' lives.  The vast majority of legal and illegal immigrants come from Mexico, whose neoliberal economic policies have been praised by Presidents Obama and Bush. Venezuela does not even rank in the top 10 countries of origin for Latino immigrants in the U.S. It is true that socialist Cuba ranks fourth on that list with 1.67 million immigrants in the U.S. -- right behind impeccably capitalistic El Salvador, which has sent 1.7 million people here. The fact is that most people who come to the United States seek opportunity for themselves and their children and most people who want them to leave don't care about their motivation in coming.

Rubio sounded more convincing when he told Juan Williams, "We used to brag about being a nation of immigration; now we fight about it."

Can Rubio succeed? His first foray on the issue illuminates his opportunities and his obstacles. With a substantive policy agenda that signals a new Republican approach to immigration, Rubio could be an asset to Romney's increasingly uphill battle against Obama, whether or not he's on the ticket. Without a substantive agenda, he's no competition for Kris Kobach.

In an email, Kobach said he had not seen any details of Rubio's Republican DREAM Act, "so I really can’t comment." Kobach also said he has not had any discussions about the proposal with the Romney campaign.