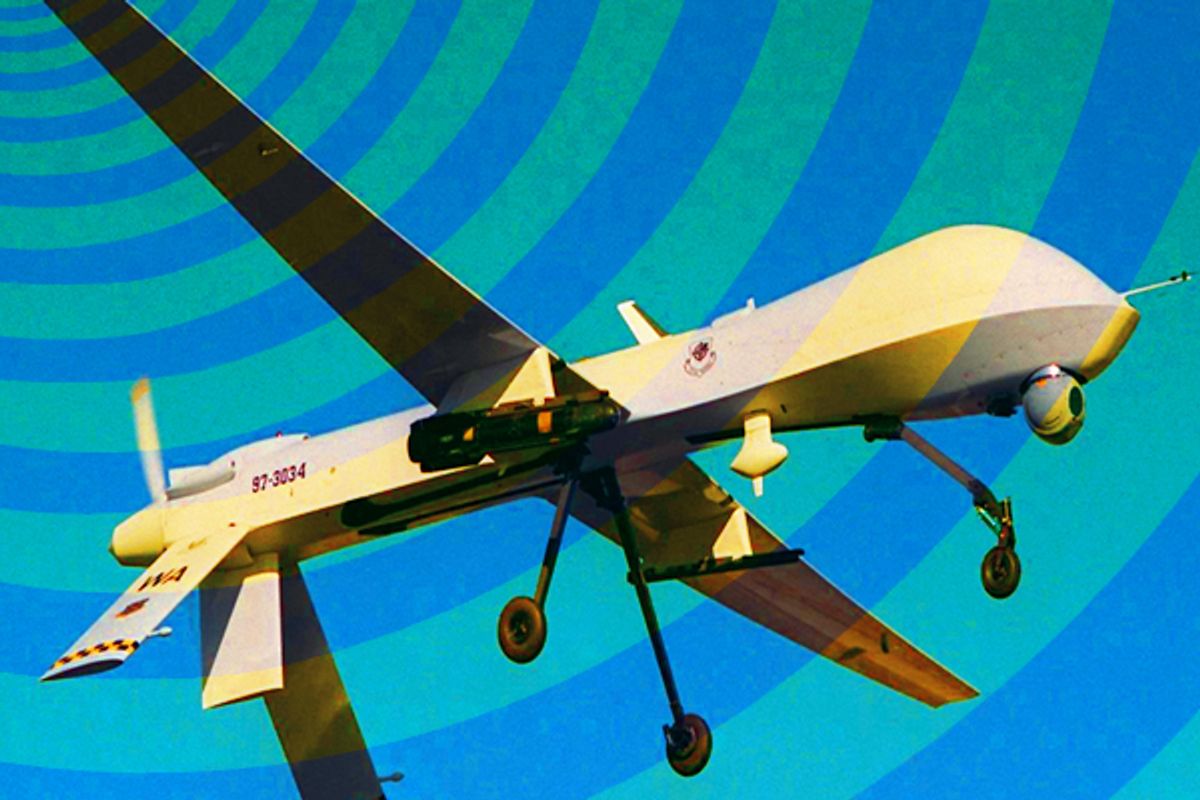 "As the wars wind down," is a phrase often heard in Washington these days, whether from Time's Pentagon correspondent Mark Thompson or ProPublica's T. Christian Miller, or Veterans for Common Sense. The suggestion, not unfounded, is that as the United States withdraws from Iraq and plans to withdraw from Afghanistan in 2014, the U.S. soldiers will be leaving foreign battlefields.

But don't expect the worldwide drone war now being waged in Pakistan, Afghanistan, Somalia and Yemen to wind down. To the contrary, an Air Force announcement posted online this week indicates the Pentagon anticipates more than quadrupling the size of the global drone war over the next four years. If that happens the number of suspected terrorists killed, the "deep resentment" provoked in the targeted countries, and the terrible civilian casualties are likely to grow as well.

The tip-off is found on FedBizOps.gov, the government's site for contractors where the Air Force announced Tuesday it is seeking "industry input on how best to support Air Combat Command's remotely piloted aircraft missions." "Support will consist of aircraft, ground control station, and Predator Primary Satellite Link maintenance, weapons loading for both aircraft, [and] munitions build-up for MQ-9 aircraft," the announcement says, referring to the Reaper drone which has a 66-foot wingspan and can carry a 500-pound laser guided bomb.

A timetable included in the announcement says that the Reapers are now launched from two locations and carry out five sorties per day.  The Air Force anticipates that activity will double in 2013 to four locations and 14 sorties a day. By 2015, the scope of the Reaper program is expected to double again to nine locations carrying out 46 sorties a day. By 2016, the plan is that Reapers will be launched from 11 locations carrying out 66 sorties per day.

All told, the Air Force foresees Predator and Reaper sorties increasing from the current level of 15 a day to 72 per day in 2016. With the vast majority of sorties to be conducted by the weaponized Reaper, it seems reasonable to assume that the increase in sorties will result in increased attacks -- and civilian casualties. (An Air Force spokesman declined to comment.)

The Predator and the Reaper are the two largest weaponized drones in the Air Force arsenal. The CIA is also believed to run drone programs which use the same equipment and weapons.

The announcement jibes with previously reported Pentagon's plan to phase out the Predator, (which was not originally designed to carry missiles) while expanding operations of the bigger, faster and more lethal Reaper over the next four years.

The new locations of drone bases  are not disclosed in the announcement other than that the Air Force wants them to be located outside of the continental United States. Bill Roggio, editor of Longwar Journal which monitors (and supports) the drone war, says he expects the new locations to be located in Afghanistan, as well as the Seychelle Islands in the Indian Ocean (for anti-piracy operations); Djibouti and Ethiopia (for attacks in Somalia), and Saudi Arabia or Oman (for attacks in Yemen.)

The drone war expansion, "is very likely to happen given the trend of a hands-off approach in using U.S. ground forces," Roggio said.

As the announcement notes, the Air Force's plans are subject to change. The Obama administration has been forced to curb the drone war in Pakistan. Near universal public opposition and objections from the Pakistani military prompted the U.S. to deescalate the drone war over the past two years. The number drone attacks in Pakistan declined from 118 in 2010 to 70 in 2011, according to the New America Foundation, which monitors media reports of attacks.

when and how specific drone strikes were authorized. The State Department was given a larger say in the decision-making process. Pakistani leaders were promised advanced notification of some strikes. The CIA pledged to refrain from conducting strikes during visits by Pakistani officials to the United States.

So while the politics of the drone war have forced the U.S. to curb its unmanned aerial war in Pakistan, Pentagon planners anticipate expanding it to many more locations. The drone war is "backfiring," according Reuters columnist David Rhode, even as the Air Force prepares for escalation.