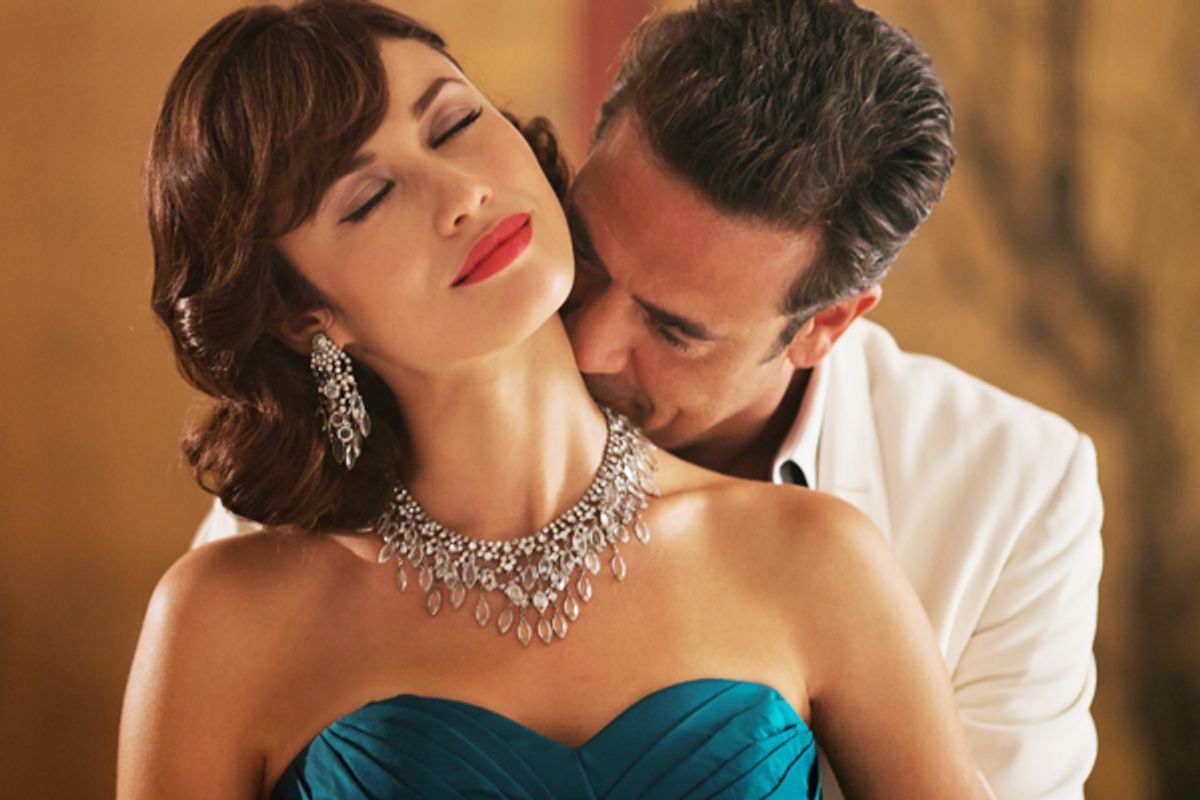 “Magic City,” a period drama about Jewish gangsters and fancy hotels in 1959 Miami, sidles up to your television tonight in a pretty dress and with an empty head. Like "The Playboy Club," "Hell on Wheels," "Boardwalk Empire," "The Killing" and "Boss" before it, "Magic City" is part of a new subgenre of shows — let’s call them pseudo-dramas; banality TV, The Fauxpranos — that have the ambitions of quality TV, but come up short in actual quality.

"Magic City’s" premium cable credentials are well in order. It’s got the period setting, the slick set design, the stylish costumes, the giant convertibles swimming down the street like elegant whales. It’s got a morally conflicted, guilt-ridden leading man who turns a blind eye to violence. It's got big themes to grapple with, like the making of Miami, Judaism, the fall of Cuba and union busting. And, for good measure, it’s got naked chicks, gangsters and Frank Sinatra. But throwing disparate parts of "Mad Men," "The Sopranos" and "The Godfather" into a blender and pouring the parts into an up glass does not a delicious or nutritious cocktail make.

Jeffrey Dean Morgan stars as Isaac “Ike” Evans, a handsome, tanned middle-aged patriarch and the face of Miami’s Mirador Playa hotel,  a luxury establishment built on what six years ago was only sand. (Fun fact: Before going shirtless, Morgan has to spend two hours in makeup to cover the crucifix tattoo on his chest.) Ike has three children — a “bas mitzvah”-aged daughter, a goodie-two-shoes son straight out of “Leave It to Beaver,” and a sex-crazed one straight out of “The Red Shoe Diaries” — and a young second wife he adores. To finance the hotel, Ike has gotten himself in debt to Ben Diamond (Danny Huston), who, as his last name suggests, is the hardest gangster this side of a deranged Joe Pesci character, the sort of sociopathic killer who shoots dogs before trying to quiet them. Even if Ike remains vague on the particulars of Diamond’s bloody behavior, he still dreams of men he knows sleeping with the fishes when he goes to bed at night.

On "Magic City" this passes for subtlety: A man wracked by a guilty conscience dreams in mob clichés. (Presumably on other nights, Ike wakes up in a sweat, having dreamed his family members were walking around sun-soaked Miami in cement shoes.) These sorts of hackneyed developments pepper the script. Speaking to Ike about his mother, one of the sons asks, “Was it like that thing in the movies where you just knew?”  Flirtatious banter begins with, “Fact or fiction: Somebody once told me that whatever you’re doing at the stroke midnight on New Year’s  tells you what your whole year will be like.” And at one point, Diamond tells Ike the inexcusably overused fable of the Scorpion and the Frog, wherein the scorpion kills the frog because “it’s in his nature.” (At least telling this tale prompts Huston to put on his best growly Batman voice and expound, “I want more.”) Next time a TV character asks another, “Have you ever heard the story of the scorpion and the frog?” let the answer be “Yes."

What’s really disappointing about “Magic City” is that if it weren’t so desperate to be “Mad Men” in Miami Beach or the Jewish Godfather it could be an energetic, escapist hour of television. The show "Magic City" should be modeling itself on is  Showtime’s "The Borgias" which just began its second season last week. "The Borgias," which takes place within the papacy and Rome in the late 15thcentury, is also a big-themed, swanky period drama starring an antihero — the corrupt pope Alexander VI (Jeremy Irons) — but it’s got too much self-awareness and good humor to be a pseudo-drama. Propelled by Irons' arch, knowing performance as the oversexed, over-scheming, over-everything pope, "The Borgias" has a campy streak and a sense of humor about itself. Its ambitions are to be entertaining, a romping costume party and not the latest middling show to make a misguided bid to become a part of the Serious Television Canon. If "Magic City" could stop chasing after the meaty, thoughtful cable shows it will never catch, it might notice it's a good-looking program in the perfect position to have a good time. It's set in a sun-soaked Miami, after all. There has got to be something fun to do there.