The 1% is doing great. But the economy won't stabilize until regular consumers have money to start spending again 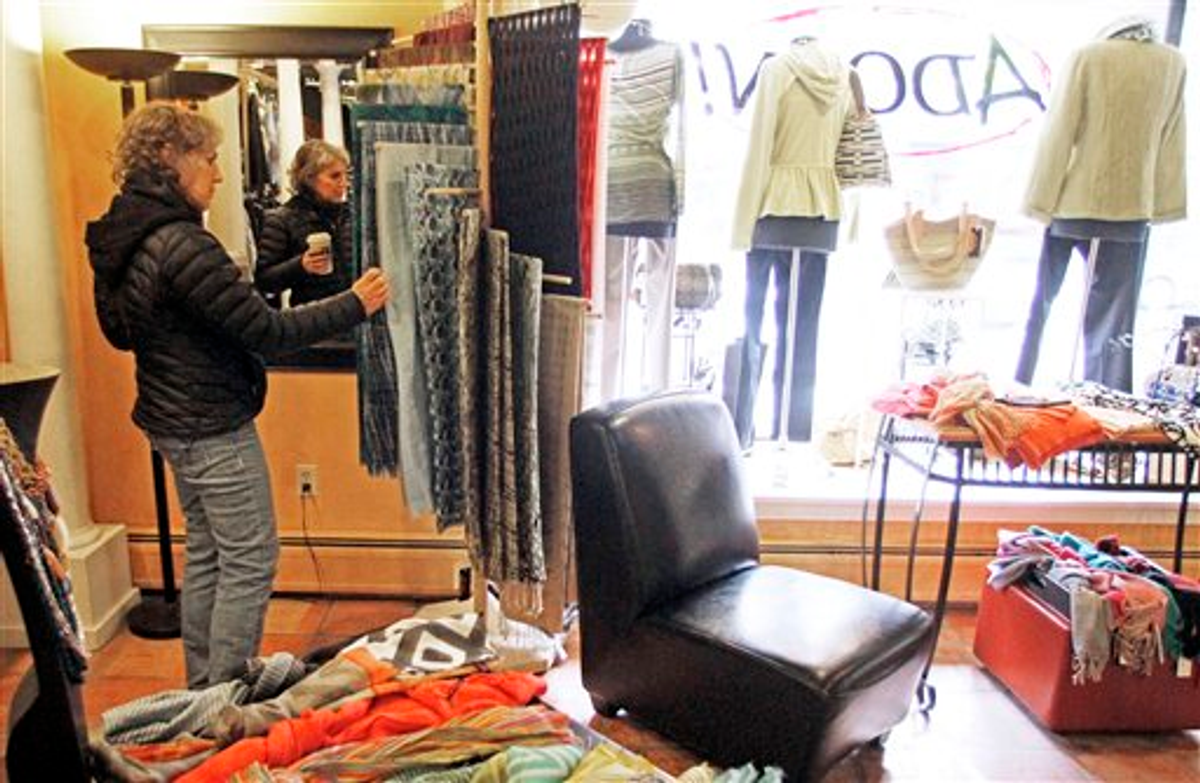 In this Feb. 28, 2012, Laurie Hanson looks over clothing at the Adorn clothing store in Montpelier, Vt. (AP Photo/Toby Talbot)
--

The economy added only 120,000 jobs in March – down from the rate of more than 200,000 in each of the preceding three months. The rate of unemployment dropped from 8.3 to 8.2 percent mainly because fewer people were searching for jobs – and that rate depends on how many people are actively looking.

It’s way too early to conclude the jobs recovery is stalling, but there’s reason for concern.

Remember: Consumer spending is 70 percent of the economy. Employers won’t hire without enough sales to justify the additional hires. It’s up to consumers to make it worth their while.

But real spending (adjusted to remove price changes) this year hasn’t been going anywhere. It increased just .5 percent in February after an anemic .2 percent increase in January.

The reason consumers aren’t spending more is they don’t have the money. Personal income was up just .2 percent in February – barely enough to keep up with inflation. As a result, personal saving as a percent of disposable income tumbled to 3.7 percent in February from 4.3 percent in January.

Personal saving is now at its lowest level since March 2009.

American consumers, in short, are hitting a wall. They don’t dare save much less because their jobs are still insecure. They can’t borrow much more. Their home values are still dropping, and many are underwater – owing more on their homes than the homes are worth.

The economy has been growing but almost all the gains have gone to the very top. As I’ve noted, this is the most lopsided recovery on record.

You will hear other theories about the hiring slowdown, but they don’t wash.

It’s not due to “uncertainty” about the economy. That’s a tautology – the economy’s future is always uncertain, especially when consumers don’t have the dough to keep it going.

It’s not because of fears about a European recession. Europe has been in the skids for some time now. Besides, the American economy doesn’t really depend on exports to Europe.

And it’s not about gas prices or the rise in healthcare insurance premiums. Both are up, but they’ve been trending up for many months.

We’ll avoid a double-dip, but the most likely scenario in coming months is a continuation of the same – an anemic jobs recovery.

President Obama will claim the economy is improving – and, technically, it is. Growth this year will most likely average around 2 percent. The problem is, most Americans aren’t feeling it in their paychecks.

Mitt Romney will claim the economy is in terrible shape – and there will be enough evidence to justify his “cup-half-empty” rhetoric.

But when it comes to explaining what’s really wrong with the economy, Romney is the perfect foil for Obama because Romney represents the richest of the rich – a man who raked in more than $20 million last year, and paid a tax rate of just 13.9 percent (lower than much of the middle class).

He made that money by buying up “under-performing” companies – that is, companies that employed more people than they needed to, and carried less debt than was necessary to show big profits (interest on debt is deductible from company income). Romney’s firm, Bain Capital, made him and his colleagues fortunes by firing workers and loading companies up with debt.

And there’s America’s economic problem in a nutshell.

Romney and his ilk are doing wonderfully well, but the rest of the nation is still in deep trouble. Yet the U.S. economy can’t fully recover on the spending of millionaires.

The president has already announced that this election is about America’s surge toward ever-greater inequality. He’s right. And this painful recovery shows it.

It would be sadly ironic if Obama lost the election because the economy responded to widening inequality exactly as expected.