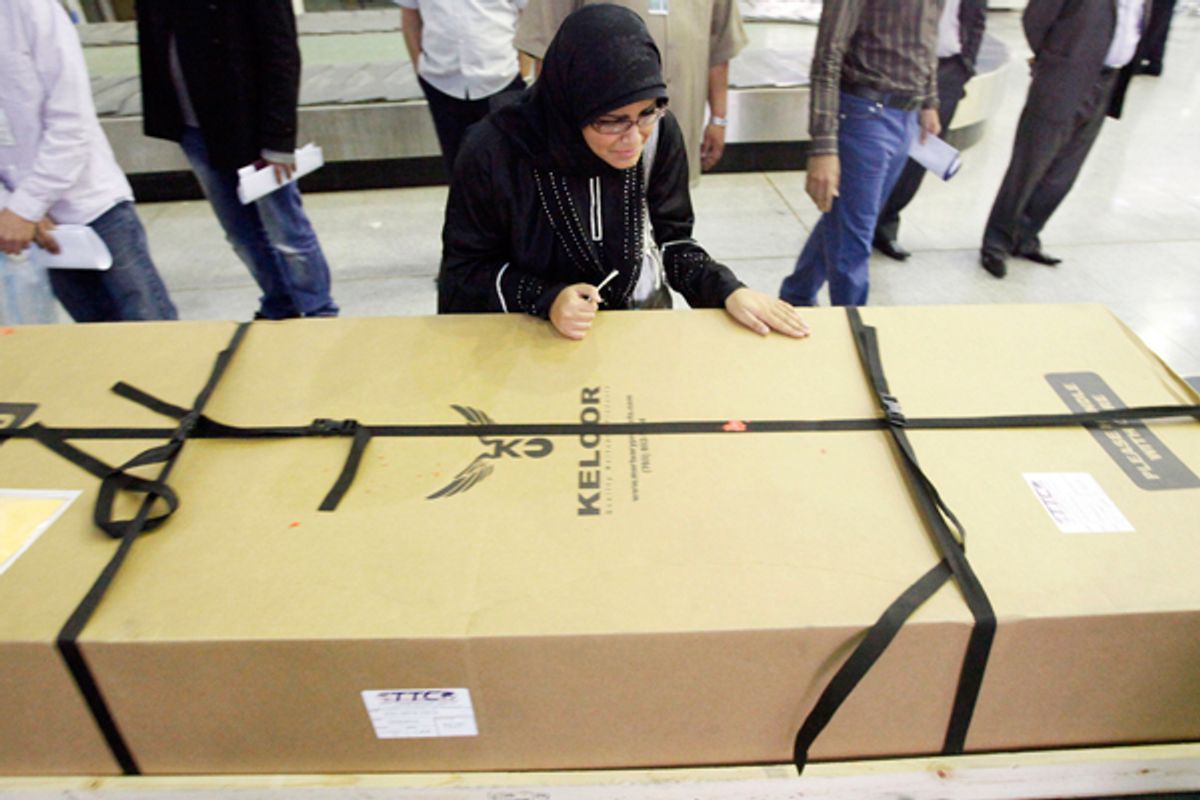 EL CAJON, Calif. – On March 21, an unknown assailant shattered Shaima Alawadi’s skull with a tire-iron-like weapon in the living room of her home. An Iraqi immigrant and mother of five, Alawadi was found by her 17-year-old daughter, Fatima, who said she was “drowned in her own blood." Alawadi was rushed to the hospital, still alive, but she was soon taken off life support and died March 24. It was, by all accounts, a heinous crime. But was it a hate crime?

After her mother’s death, Fatima said she found “a letter next to her head saying, ‘Go back to your country, you terrorist.’” The accusation sparked outrage and brought national media attention to the murder. And yet, within days, publicity-craving Islamophobes Pamela Geller and Robert Spencer were pushing an alternative motive: that Alawadi’s death was, in fact, an “honor killing.” Geller crowed, “I surmised that the murder of Shaima Alawadi appeared to be Islamic, rooted in Islamic teachings and culture …”

I journeyed to Alawadi’s adopted hometown of El Cajon in Southern California to find out more about her death. El Cajon is a microcosm of Iraq, but an Iraq that no longer exists. More than 40,000 Iraqis are struggling to build a new life there, having fled persecution in their homeland. One local described to me a community where “There’s Chaldeans, Yazidis, Mandaeans. There’s Shi’a, Sunni, Kurds. There’s Assyrian and Armenian.”

The first wave of immigration came in the late 1970s on the eve of the devastating Iran-Iraq War. Others, including Alawadi and her family, fled after the 1991 Persian Gulf War, mainly Shi’a who unsuccessfully tried to overthrow a wounded Saddam Hussein at the urging of the senior Bush administration. The third wave was courtesy of the junior Bush’s 2003 invasion, which spawned Islamist militias that have decimated Iraq’s Chaldean Christians, Mandaeans (followers of John the Baptist) and Yazidis (a 4,000-year-old syncretic religion). Out of the millions of Iraqi refugees from the most recent U.S. war, 59,000 have landed on American soil.

Many have found their way to El Cajon. They tell of harrowing escapes from kidnappings, bombings and death squads, years in refugee camps and life savings spent to hopscotch from country to country. Recent arrivals come bearing deep traumas and have landed in a depressed economy where they often sink into joblessness, squalor and depression. They have also discovered not everyone is welcoming.

“There is a hate crime problem in El Cajon,” says Basma Coda, an Iraqi-American who works at the Chaldean-Middle Eastern Social Services. “We have documented six physical attacks since 2007 in which Iraqi refugees were beat up and had broken bones. All had to go the hospital. They were all over 50, and one was a 75-year-old man with Parkinson’s disease.” (The El Cajon police department did not return calls about the alleged crimes.)

“There are a lot of anti-Islamic groups and know-nothings here,” says California State University professor Brian Levin, director of the Center for the Study of Hate and Extremism in San Bernardino. Nonetheless, he and other hate-crime monitors are skeptical of some of the alleged details of Alawadi’s death. “Why are the police so quick to say it is an isolated incident? That suggests to me they are looking at other motives. There is the possibility this could be some sort of personal attack or revenge attack.” Mark Potok, senior fellow at the Southern Poverty Law Center, which monitors hate groups nationwide, says that when he first heard about the threatening notes, “I raised an eyebrow. It’s too perfect. It’s highly unusual to have notes that spell out the motive on paper.” As for the crime itself, Potok says, “It is quite unusual to invade someone’s home, especially a woman, and violently beat her to death in the dining room.”

Indeed, in the days after her death several revelations called the hate-crime allegation into question. On April 4, an affidavit for a search warrant about the murder was “accidentally released,” according to the New York Times. The San Diego Union-Tribune, which first received the document, claimed it shows a “family in turmoil and cast doubt on the likelihood that her slaying was a hate crime.” Alawadi was said to be planning on leaving her husband, based on blank divorce papers found in her vehicle. Last November, police investigating reports of two people possibly having sex in a car found Fatima with a 21-year-old man. After her mother was called to pick her up, Fatima allegedly jumped out of the moving car at 35 mph. While being treated at a hospital for her injuries the court records state, “Police were informed by paramedics and hospital staff that Fatima Alhimidi said she was being forced to marry her cousin and did not want to do so she jumped out of the vehicle.”

The document also mentions “a neighbor reported seeing a skinny dark-skinned male running west from the area of Alawadi’s house” on the morning of the murder. According to the affidavit, as of March 27, the police had not confirmed the whereabouts of Kassim Alhimidi, Alawadi’s husband, at the time of the murder. And curiously, “a handwritten note was located at the scene that the family denied seeing before.”

Yet some in the community are still skeptical because there is no suspect, motive or murder weapon. Hanif Mohebi, director of the San Diego chapter of the Council on American-Islamic Relations, says, “There are definitely questions that are brought up by the article, but we should not jump to a conclusion unless there is a real fact provided. Our community is not immune to these issues.”

Some observers worry that the new information in the Alawadi case will be misused. Hanif Mohebi says, “From the beginning we were very cautious about the murder because we are all human beings, and this could go any way. The Islamophobes will exploit this. If there is something that advances their agenda, they will most definitely use it.” Right on cue, Geller and Spencer began their postulations about “honor killings.”

Potok also stresses that, whoever murdered Alawadi, the rise in Islamophobia is genuine. The Southern Poverty Law Center has tracked a 200 percent increase in anti-Muslim hate groups nationwide from 10 such groups in 2010 to 30 in 2011. Potok attributes the spread to “the so-called Ground Zero Mosque controversy in 2010 that was really ginned up by opportunistic activists and politicians … This is a classic case of words having consequences.”

The rumors of notes, in particular, have unsettled Iraqi immigrants to El Cajon. The notes have hurled them back to wartime horrors they seem unable to escape. After the United States occupied Iraq, a favored tactic of extremist militias was to deliver a note to intended victims warning them to leave or be killed. Families would receive letters because a child or husband was collaborating with U.S. forces, or perhaps they were the wrong ethnicity or religion in the wrong part of town. Religious minorities were sometimes given the “option” of converting to Islam.

Basma Coda says, “We have threatening notes in our office that people brought from Iraq.” The notes say things like, “You are an infidel. You are a sinner. You deserve to die. If you don’t leave by a certain time, you and children will die.” Often they would be given a specific day or time to leave. Coda says, “The Iraqi refugees in El Cajon every day they live their fear. They live their trauma. The future is unknown for these refugees.” She says her social service organization is trying to help them, “but one incident like Alawadi’s murder takes them back to the trauma they experienced.”

On March 30, I attended an outdoor prayer service and candlelight vigil for Alawadi. I met one of her neighbors from Iraq. Abbas Almeali, 42, clad in traditional Iraqi garb and headdress, said he knew Shaima and her family from Samawa, the closest city in southern Iraq to the Saudi Arabian border. He fled in March 1991 after the revolt failed, but “was proud to be part of the uprising.” He said Alawadi’s father was tortured by Saddam Hussein’s regime and her uncle was hung during the uprising. “She was a nice girl, she had no problems with anyone,” Almaeli said.

Kamyar Hedayat, a medical doctor of Iranian heritage, spoke at the vigil. Hedayat said as he has practiced critical care for children, “I’ve watched children die, and I know how death affects families.” Hedayat said, “It is ironic that a woman who escaped the murderous regime of Saddam Hussein and the bombs of George Bush, Sr., lost her life in San Diego seeking safety and civility.”

Michelle Fawcett contributed to this report.