Daily Caller genius: I don't feel bad for black people anymore because I think a black person stole my bike 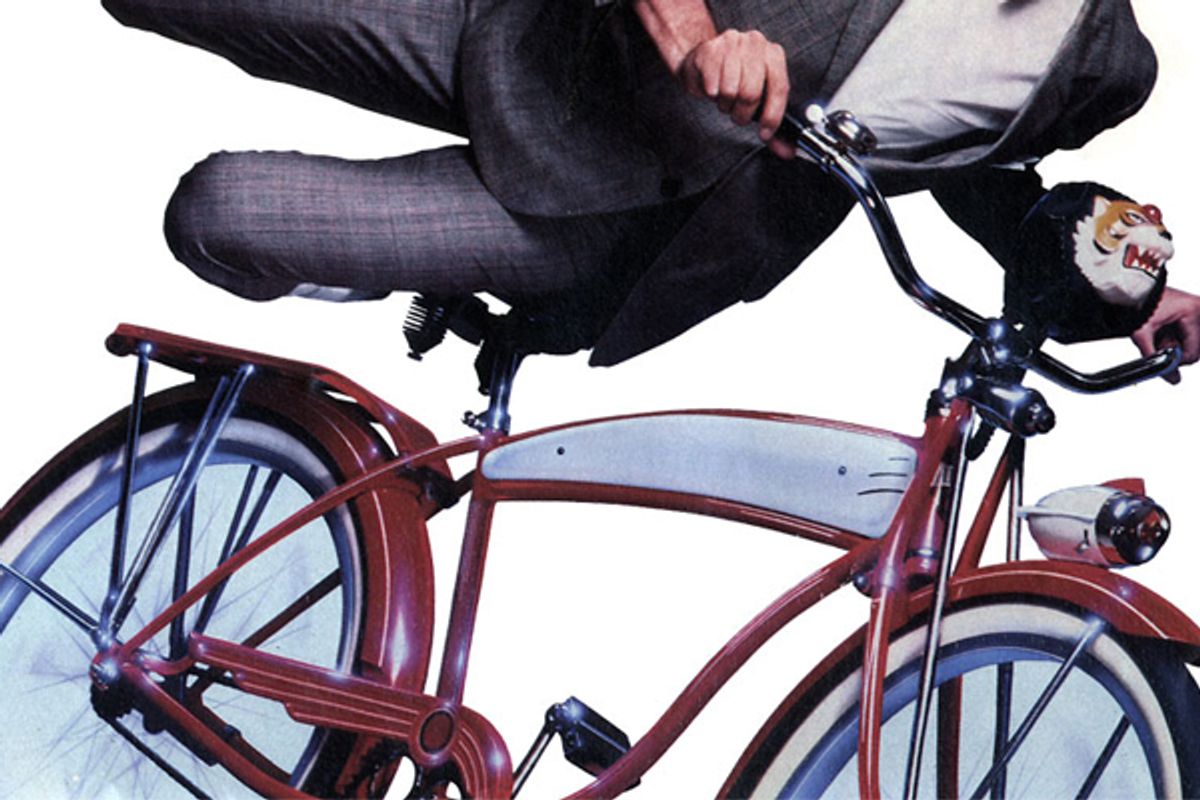 Mark Judge would like the world to know that he no longer has any "white guilt" because his bike got stolen and the perpetrator may have been a black person, or possibly (the culprit is still at large!) black people in general.

Who is Mark Judge? He is some guy writing an opinion column for Tucker Carlson's online magazine, "Assumption of Trayvon Martin's Guilt Illustrated." (He is also the author of some awful-sounding book about being a right-wing Catholic who likes rock 'n' roll music, and he once wrote an unintentionally funny review of John McWhorter's book about hip-hop.)

What happened is, he had his bike locked to his car while he went to services on Good Friday, and when he came back, his bike was gone, and he doesn't think a nun stole it so basically his parents lied to him when they said "we are all the same" and his favorite movie is no longer "In the Heat of the Night." (The deductive reasoning on display is staggering: It couldn't have been monks, must have been black people.)

When I got home I vented to my friends. I told them I was going to scour those neighborhoods until I found the bike. In reply, a liberal friend gave me a lecture about profiling and told me to just forget about the bike. “That person needs our prayers and help,” she said. “They haven’t had the advantages we have.”

That’s when I lost it. I had been carefully educated by liberal parents that we are all, black and white, the same. My favorite movie growing up was “In the Heat of the Night.” Yet that often meant not treating everyone the same. It meant treating blacks with a mixture of patronizing condescension and obsequious genuflecting to their Absolute Moral Authority gained from centuries of suffering. It meant not treating everyone the same.

It meant leaving valuable things like a bike in a vulnerable position in a black part of town because you didn’t want to admit that the crime is worse in poor black neighborhoods.

Stupid strawman liberal friend! If we're all "the same," why did a (probably) black person (possibly) steal Mark Judge's bike?

It actually gets dumber from there -- on Page 2 he excitedly recounts the time universally loathed asshole Piers Morgan totally told off Toure -- but long story short Mr. Judge has decided that "black pain is no different than white pain" and so therefore Soledad O'Brien (??) should stop complaining. After all, the black person who may have stolen his bike may also have "a car, a nice apartment, a hot girlfriend and good health."

I mean, sure! That's possible! It's definitely within the realm of possibility that the hypothetical black person you assume stole your bike because you were near a "poor black neighborhood" when it disappeared has a really sweet life, sure.

Wise up, White Americans. Your liberal parents lied to you when they said "this country's centuries-old tradition of state-sponsored discrimination and institutional racism means a black person would never steal your bike, so just park that shit wherever." Or like maybe your "white guilt" is just weird curdled racial resentment ("even though I try super hard not to be incredibly racist black people still won't forgive me!") which caused you to go in a really weird direction with your otherwise totally normal anger about being the victim of some random crime of opportunity.