The Miami Marlins' manager is lucky to get a suspension. Not so long ago, he might have received a car bomb. 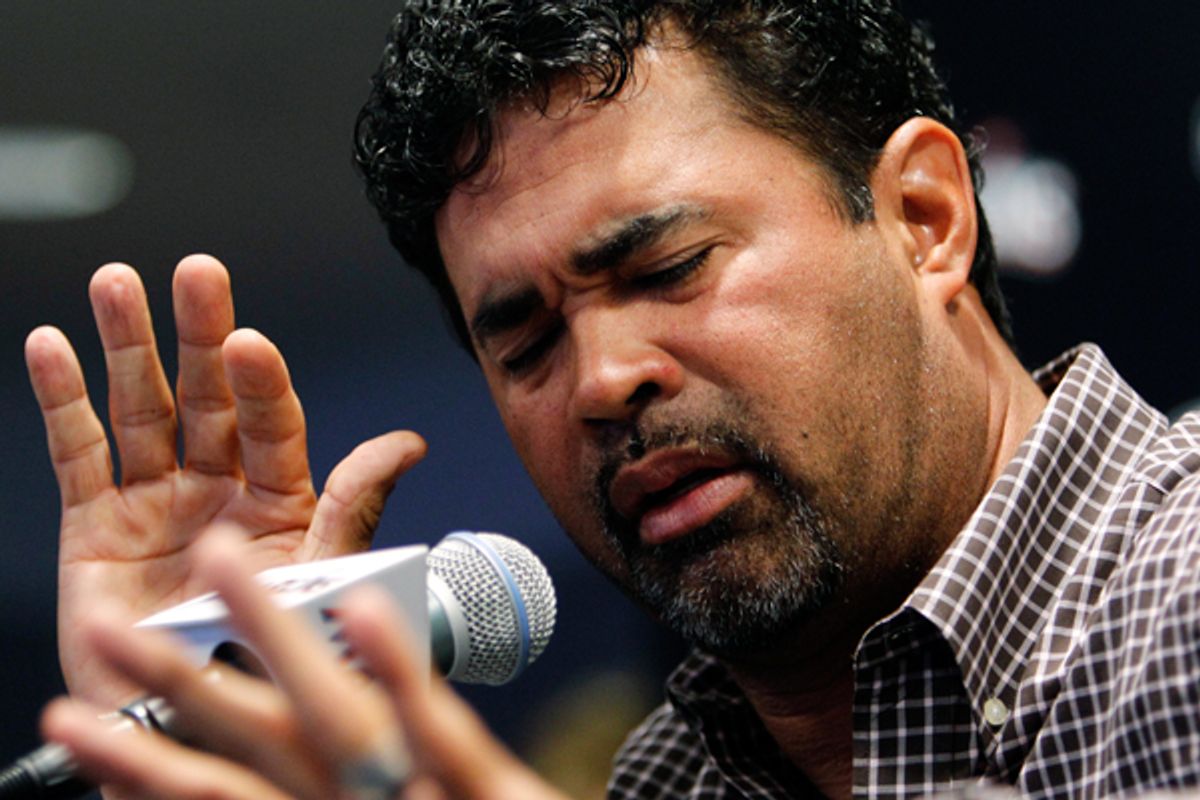 There's not much reason to doubt that baseball manager Ozzie Guillen admires Fidel Castro. He said so five years ago in an interview with Men's Journal. When asked to name the toughest man he knew, Guillen replied, "Fidel Castro. He’s a bull—- dictator and everybody’s against him, and he still survives, has power. Still has a country behind him. Everywhere he goes, they roll out the red carpet. I don’t admire his philosophy; I admire him.’’

No one cared about that macho thought because Guillen was skipper of the Chicago White Sox at the time. As the newly hired manager of the Miami Marlins, Guillen repeated the notion to Time last week--"I respect Fidel Castro," he said. "You know why? A lot of people have wanted to kill Fidel Castro for the last 60 years, but that [expletive] is still there"--and he found himself on the brink of unemployment.

As Miami's Cuban-American talk radio hosts whipped up a storm of protest, the Marlins denounced Guillen and suspended him for five games. On Tuesday the chastened manager repudiated his statements, said Castro was a bad man, and apologized "on my knees." With Guillen's job hanging in the balance, most sportswriters attributed the controversy to his big mouth: He is known for insulting gays and admitting he likes to get drunk often.

But Guillen's real problem is Cuban Miami, where enforcing the anti-Castro party line is a more popular pastime than baseball, not the least because the Marlins owners arranged to stick the city's taxpayers with the bill for their new $640 million ballpark in Little Havana while depriving local residents of legal parking spaces. The combination of Guillen's candor, Miami politics, and the Marlins' arrogance is what has brought the Cooperstown-bound skipper to the brink of being fired.

The city has never shown much tolerance for people who say nice things about Castro. In 2000, Jim Mullin, editor of the city's alternative weekly New Times, compiled a chronology of violent intolerance that has few parallels in modern America. In 1975 a Cuban American man was murdered after advocating closer relations with Castro's Cuba. In 1978, an anti-Castro talk radio host had his legs blown off by a car bomb because he dared criticize his fellow exiles for resorting to violence. In 1983, the Little Havana branch of a Miami bank was bombed because one of its executives had negotiated with the Castro government for the release of 3,600 political prisoners. In 1998, a bomb threat emptied a concert hall during a performance by Compay Segundo, a 91-year-old musician made famous by the movie "The Buena Vista Social Club." All told, Mullin found more than 40 instances of bomb threats and explosions directed at people who had somehow offended the anti-Castro orthodoxy.

A 1994 Human Rights Watch report on the sorry state of free speech in Miami concluded,  the city is "dominated by fiercely anti-Communist forces who are strongly opposed to contrary viewpoints." The HRW reports linked these forces to "acts of repression ranging from shunning to violence." The reports found "significant responsibility" by the government at all levels, including "direct harassment by the government and government support of groups linked to anti-free speech behavior."

That tradition continued this week when two local politicians injected themselves into the controversy by calling for Guillen's firing. The call was echoed by a vigilante group known as Vigilia Mambisa, which describes itself as "a hard-line, right wing, Anti-Castro, Anti-Communist group of dedicated Cuban-American demonstrators … known for their rapid response to calls for protest aired on Miami Spanish-language stations."  The group is calling for a boycott of the Marlins until Guillen is fired.

The problem is Miamians are already boycotting the Marlins. The team ranked 28th out of 30 major league teams in attendance last year. Dario Moreno, a professor of political science at Florida International University, said, "I don't think this is a free speech issue. There's a lot more tolerance than there was 30 years ago." Moreno noted that south Florida's three Cuban-American congressional representatives and the state's Cuban-American senator have not called for Guillen to be fired.

"This has more to do with the Marlins and a community that invested large sums of money in their stadium over the objections of lots of people," Moreno said. "The promise was that they would bring the community together and give us something to be proud of. It's not working out very well."

Moreno says he thinks Guillen may be able to keep his job if the Marlins muzzle Guillen (good luck with that) and reach out to the community. "The baseball fans are willing to let this one go by if he just promises to not talk politics," Moreno said.

"As a Christian, I accept his apology," said Alberto Muller, a former newspaper columnist who spent 15 years in a Cuban prison. "But in Miami, not everybody is a Christian." Muller thinks Guillen will be fired.

A Miami Herald online reader survey found 57 percent of 2,500-plus respondents saying Guillen's five-game suspension was sufficient punishment. If Guillen only loses his job for expressing admiration for Fidel's toughness, it will be a sign of civic progress. Not long ago, he might have lost his legs or his life.