Was "Glee" ever good?

As the now-grating show returns from its hiatus, it's time to wonder what we loved in the first place 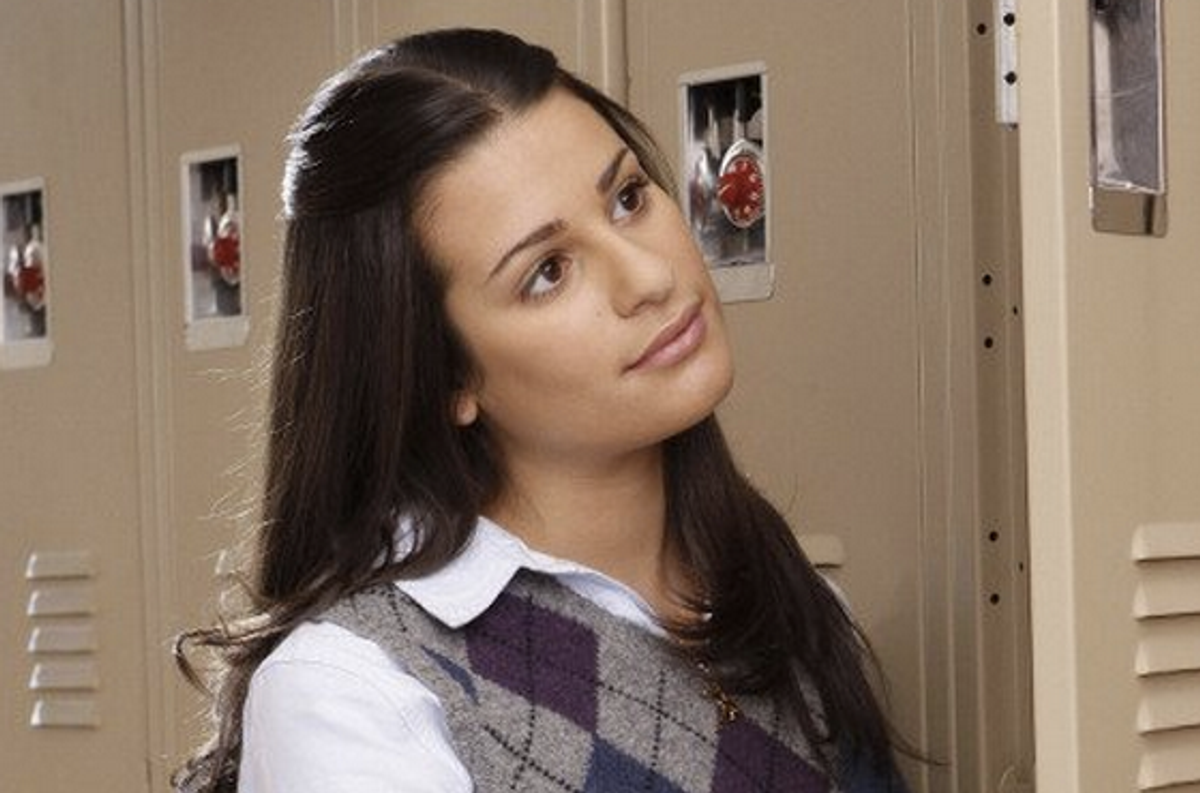 “Glee” returns from its winter hiatus tonight. In the episode right before the break — feel free to imagine this in the high-speed, helium-inflected cant of the “Here’s What You Missed on Glee” intro — Quinn Fabray had just been hit by a tractor while texting and driving on her way to the high school nuptials of Rachel and Finn, who were getting married so that it would be harder to break up when they go off to college. Just before the wedding, the Glee kids had won Regionals, a victory that had been made possible after Sebastian, the evil leader of a rival glee club, had stopped blackmailing them with Photoshopped naked pictures of Finn. Sebastian had realized the error of his ways after Karofsky, who used to bully Kurt before he came out of the closet himself, attempted suicide after being bullied at his new school. His father found him after he tried to hang himself, which prompted the Glee club to gather together to teach Rory, the Irish exchange student, about the existence of peanut butter. In the amount of not entirely coherent, but emotionally loaded plot it churned through, it was a fairly typical episode of “Glee.”

“Glee” is currently in its third season, and has just been picked up for a fourth, but it feels much older. Shows often hit their creative peaks in Seasons 2 or 3, cruise along for a few more years, and then begin to decline, hitting up against the limits of the various character permutations. But “Glee,” which eats plot faster than Ebola eats flesh, has sped through this cycle. Watching has become exhausting and enervating.

I can remember a time when I loved “Glee” — I think. When “Glee” premiered in 2009 it was an immediate smash and a social phenomenon, an over-the-top and joyous hit buoyed along not only by its structural originality but by its sharp wit, big heart and daring sexual politics. But the show has fallen so far, so fast, I have begun to wonder if the common wisdom— that it was great, and then took a nosedive, as Ryan Murphy shows are wont to do — is true. Were the guest stars, breakneck pacing, hit-you-over-the-head messaging, cheesy mashups, smug self-satisfaction and reckless character assassinations there from the beginning, in smaller amounts? And did I just not notice because I was too busy dancing around to “Single Ladies” with the rest of the McKinley high football team and reveling in the novelty of a show so unabashedly musical and unabashedly liberal? In other words, was “Glee” ever good?

Watching early “Glee” is a two-tiered experience: On the one tier, there is the simple fact that, yes, “Glee” used to be much better. But on the second tier is the undeniable, hindsight-enabled observation that bad “Glee” has always been lurking around. For my money, the best episode of “Glee” is its fourth, the one in which Kurt becomes the football team's kicker with the help of Finn, inspires the team to do the “Single Ladies” dance on the field to win and then comes out to his father. The episode is jubilant, surreal, outlandish, bold and emotional, but even it contains harbingers of the nonsense to come. In the same episode, Quinn announces she’s pregnant, Finn believe he’s the father because he ejaculated into a hot tub once, and Mr. Schuester’s Terri, faking a pregnancy of her own, begins angling for the baby.

Much of good “Glee” is showcased in the early episodes, which seem downright low-key compared to what has come since. There’s singing and Slurpees and Rachel’s Tracy Flickian intensity, but the plot is contained — a bunch of kids who want to be cool; a teacher trying to make a difference; a girl with a crush on a boy — and the characterizations are nuanced. Mr. Schuester, who has since been condemned to dull, boring sainthood, unethically blackmails high-school quarterback Finn into joining Glee club in that first episode. The sparkly-eyed, then baby-faced Kurt gets bullied daily, but it is only one part of his day, not the message of entire episodes.

But from the jump, the cast was too big, the writers easily losing interest in the core characters. You may not remember Ken Tanaka, Sandy Ryerson, Mr. Schuester’s wife, Terri, and Howard Bamboo, but all had meaty roles in the first handful of episodes. And while guest stars have become a plague on “Glee,” they were also there from the beginning: Josh Groban cameos in Episode 3.

Also apparent by Episode 3: “Glee’s” weird cruelty to its cast, wherein the writers seems to believe it’s better to call out the physical shortcomings of their actors than to leave it to online trolls. An evil little dance instructor named Dakota Stanley runs through the Glee club members and tells them to get nose jobs or go on diets, bitchy tips that presaged future episodes in which Finn would get called out for his flabby tummy, Rachel would want a boob job, Mercedes would be obsessed with candy bars and Sam would get dubbed Trout Mouth.

And there is some damage done by later “Glee” that can't be undone. Consider Mr. Schuester, who in the early episodes was the meaty, main character -- a good, if disappointed man who avoided wallowing in his failures by helping his students achieve their dreams. His passion for Glee club was admirable and also a little selfish. It was his way to redeem himself, as well as the students around him. His occasional acts of self-involvement — to stop coaching Glee to focus on his own group, Acafellas, for example — made him more than just the simpering, cliché-spewing machine he has since become. But the fact is, three seasons in, that's all Mr. Schue is, the annoying, curly-haired guy who says “I believe in you” too often. Sure, he seemed like he could have been a great character, but he didn’t in fact become one. Early “Glee” is a reminder of his squandered potential (and also his poor rapping skills).

The most exact measure of how “Glee” has changed, however, comes in the transformation of Kurt Hummel, who has always been “Glee’s” soul. Early Kurt, a gay teenager dealing with all the hardship that entails, was a delight, at once extremely attuned to the bigotry of the world around him, to the homophobia of his peers and the implicit disappointment of his father, and yet innately, unconsciously uncowed. He tries out for the football team hoping to bond with his father, and yet it never occurs to him that performing the “Single Ladies” dance as a part of his kick-off routine might undercut this in any way. When he dances on the field to Beyoncé he’s not trying to make a point, he’s just doing what he needs to do to succeed. He’s just being himself. Kurt, just like early “Glee,” didn't know his own strength and charm.

In the seasons since, Kurt has matured: He came out, he got comfortable, he got a boyfriend, he lost his virginity, and is now mentoring his gay peers— his helping Karofsky to imagine a future life for himself was the best thing about "Glee's" last episode — but he has also hardened. He's become more self-righteous and smug, always staying on message, more spokesperson than student. It’s hard to imagine Kurt doing anything as spontaneous as dancing around on a football field to try to make his dad happy.  Just like many of the characters on "Glee" he now seems locked into dispensing life-affirming advice. "Glee" knows Kurt's strength  — he  is likely to be the show's lasting contribution to the cultural lexicon, one of the first proudly gay and popular teen characters on television — and so they've made him the show's self-satisfied mouthpiece. As with everything else "Glee" has changed over its short run, the show's not better for it.