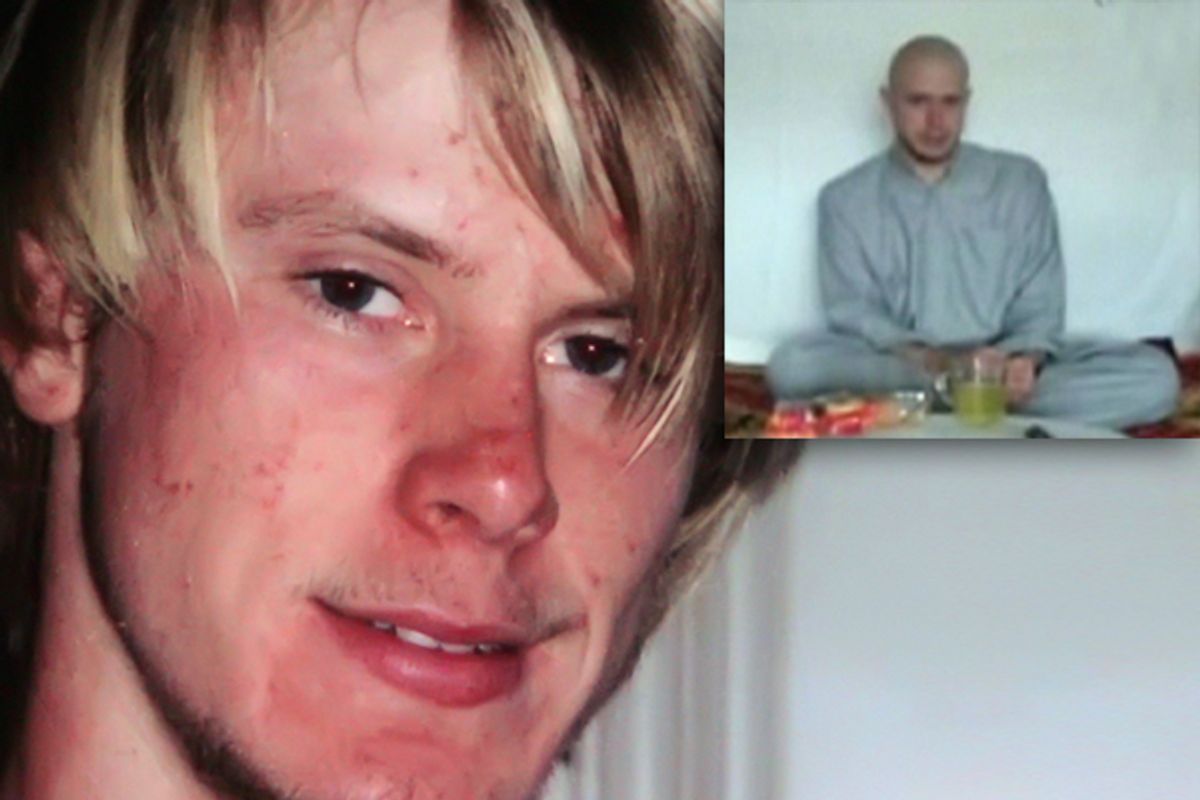 An undated family photo of Sgt. Bowe Bergdahl from before his capture. Inset: A still image of Bergdahl taken from a Taliban propaganda video from July 18, 2009. (Reuters/AP)
--

The decision to send young men and women to kill and die in foreign lands is one which is often taken without much real thought for the welfare of these individuals, often barely past the age of adulthood, despite the massive amount of rhetoric and jingoism which surrounds their deployments. Soldiers are killed and maimed with depressing regularity, registering as a brief news story and then in most cases disappearing from the public consciousness forever. Perhaps even more painful psychologically is the plight of soldiers in conflict who disappear into the hands of those they have been sent to fight, continuing to exist in a state of living death, often mistreated and without means of contacting their loved ones or a clear prospect of when, or if, they may ever safely return home again. During the years of his detention in the Gaza Strip, captured Israeli soldier Gilad Schalit became a symbolic figure in his country whose name was known to every citizen. Through his suffering he became an iconic figure in Israel, where concern about his fate was almost universal and public pressure eventually forced the government to make his status a priority in its policy decisions. Similarly, most every Palestinian knows the plight of their own prisoners languishing behind enemy lines and popular opinion ensures that their fates are front and centre in every political negotiation carried out by their leaders.

Those in the United States who advocate war often cite the need to Support the Troops, ostensibly to show them legitimate support, but in practice usually as a means to stifle debate in order to further their own agendas. “Supporting the Troops” is an end-all response and bludgeon to any criticism of the massive, opaque wars being fought around the world; but how much does it really correspond to reality? What would be the reaction of Americans and American politicians, especially those continue to support military intervention, to their own captured soldier? Who is the American Gilad Schalit, the iconic figure of sacrifice whose fate is the concern of every one of his compatriots?

There is no figure who occupies such a place in the American imagination, but if there were to be one it would rightly be Sgt. Bowe Bergdahl. For nearly three years Bergdahl, a 26-year old from Sun Valley, Idaho has been held captive by the Afghan Taliban. Captured in an attack on his unit in Paktia province in Eastern Afghanistan, the only glimpses his family and the outside world have seen of him over the past several years have come through intermittent video transmissions released by his captors to confirm his continued detention. In the first of these videos released in 2009, Bergdahl can be seen visibly choking back tears as he describes his life in detention, “Well, I’m scared,” he says. “It’s very unnerving to be a prisoner.” From what little intelligence that has come out about his life in captivity since, it is known that as recently as 2011 he made an escape attempt from his captors only to be recaptured and confined permanently in shackles to prevent any further attempts. The last video footage released of him, also in 2011, shows a young man who appears haggard and scared, a far cry from the smiling military photograph of him before his deployment to the Afghan battlefield.

Despite his nearly unfathomable suffering, Bergdahl is as out of sight and out of mind to the average American as the average Afghan, Iraqi, Somali, Pakistani and Yemeni victim of the past decade of war. One person who has not forgotten about him however is his father, who last year released a heart-wrenching video appeal for his release which should be mandatory viewing for all those who make a point of sloganeering about Supporting the Troops, or who advocate for them to continue to be sent on “interventions” into foreign lands without enunciating what clear, pressing national interest they will be serving. Bound by suffering with others who have had their lives torn apart by these wars, Bergdahl and his family are as much the victims of the cynical maneuvering of politicians and the lobbying of special interest groups as are the Afghans being killed and imprisoned over this war today. In his video Bergdahl’s father appeals to the Taliban to sympathize with his son’s plight by citing his empathy with Afghans presently being detained by NATO forces, "No family in the United States understands the detainee issue like ours. Our son's safe return will only heighten public awareness of this.”

Perhaps that may be true, but where is the public awareness in the U.S. over the plight of its own captured soldier? Among those who advocated sending young people such as Bergdahl to kill, die, and be captured on an Afghan battlefield, who is advocating on his behalf and campaigning to make his safe passage home a priority? Sgt. Bergdahl has been detained for nearly three years, yet his image is unknown to the average American, his name is obscure, and his fate is seldom brought up in public discussions of the conflict. Unlike Gilad Schalit, he has not become a cause celebre in his society, despite widespread insistence that military service-members are sincerely revered and supported. Like an untold number of nameless Afghans and Iraqis who have been detained, tortured and killed, he remains an expendable pawn to those whose interests have been served by these conflicts and who continue to campaign for their expansion to new fronts.

Of those whose lives are ultimately affected by war, the overwhelming majority have little or no say in the popular discourse yet are made to bear the brunt of others ill-thought out or malicious decisions. The same neoconservative ideologues who advocated the invasion of Iraq and who have supported the continued occupation of Afghanistan are now calling for Americans to be sent to fight and die in Iran, despite the widespread consensus within the military that a war with Iran would be directly contrary to U.S. national interests. What almost all of these enthusiastic war advocates have in common is that they have never served in the military and have never had to deal with the horrific consequences of their recommendations,. Such costs are borne by people such as Bowe Bergdahl, who are forgotten and abandoned once they cease to serve a political purpose.  Those who continue to call for more young men and women to be sent into the abyss of war but who choose never to pay the cost of these grave decisions themselves are the modern iterations of Henry Kissinger who in a moment of candor famously described soldiers as “dumb, stupid animals to be used as pawns of foreign policy.” The neoconservative pundits slavishly campaigning to send American troops into Iran today can be seen to evince the same dismissive view of those like Bergdahl who do the fighting for them, even if they have learned to be more circumspect in their wording than their famous ideological forefather.

Israelis, Palestinians, and others are admirable for their tireless commitment to their detained compatriots and through their actions truly exemplify the meaning of supporting those who fight for them, all jingoism aside. Those in the U.S. who claim to Support the Troops would find an appropriate place to start by bringing public attention to the plight of Sgt. Bergdahl and by putting pressure on their leaders to make his safe, speedy return an immediate priority. His suffering and terrible sacrifices have gone on long enough and it should be the duty of his patriotic fellow citizens to raise awareness of his circumstances. Three long years in a young life is too high a price to pay in lonely obscurity, ignored even by those who campaigned to send him to war. It is time for Bowe Bergdahl to be brought home.