Is this the end of Madonna?

The queen of pop's new album shows a record-breaking sales drop. It may be time to admit that she no longer matters 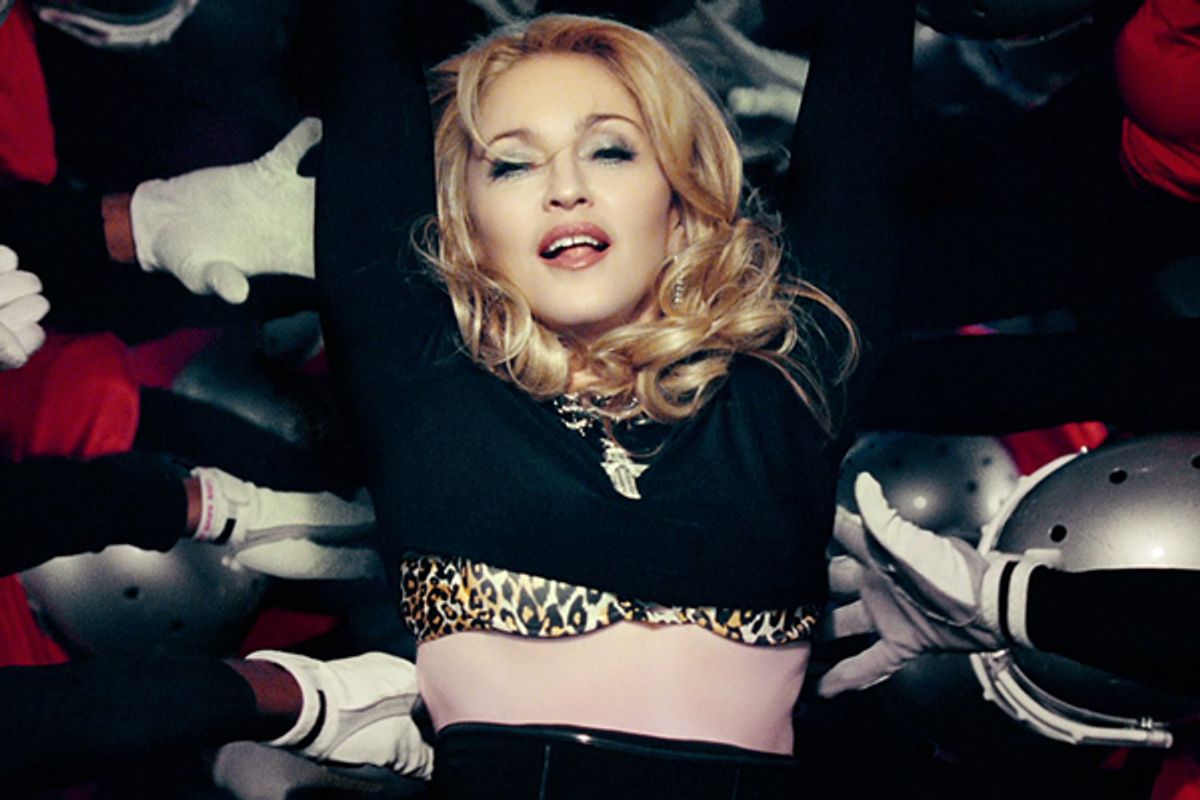 A still from Madonna's "Gimme All Your Luvin'" video. (madonna.com)
--

You'd think that having your latest album debut at the top of the Billboard chart would be sufficient to be considered a roaring success. Not this time. The halftime performance at the Super Bowl couldn't save her. The coy references to Ecstasy and the whipped up feud with Deadmau5 and the being deemed too racy for network television again couldn't save her. Even that lofty perch on the charts couldn't save her. This week, Madonna will have the distinction of setting the record for the biggest sales drop in chart history, as numbers of her album "MDNA" plummeted a staggering 88 percent. Oh, how the Madgesty has fallen.

What happened? How did one of the most durable brands in pop music tumble so spectacularly? Well, part of the explanation can be found in the way the early numbers for "MDNA" were so cleverly goosed. As the Hollywood Reporter explained Tuesday,  the album has been offered as part of a concert ticket package, which "skewed the initial numbers reported by Nielsen SoundScan." Clearly, Madonna is now taking her "We'll throw in the tickets WINK WINK" salesmanship cues from Craigslist. The other thing that happened is that the album, to many ears, sounded like a tepid, mechanical rehash of her previous hits. She's weathered mediocre sales and scathing reviews in the past, but there is something about this particularly epic tumble from chart domination that suggests a powerful shift in the sway Madonna holds over popular culture.

Madonna was, a generation ago, ideally suited to the new era of music television -- simultaneously pleasing and provocative, with an innate knack for novelty. That mutability has sustained her throughout her nearly 30-year career. But reinvention can get exhausting -- if not for the seemingly tireless performer, for audiences. She's still regularly referred to as a "material girl" who's "like a virgin," despite the fact the chirpy vixen of yesteryear is now a 53-year-old mother of four. She's the cross-burning, saint-kissing heroine of "Like a Prayer," the temptress of "Erotica," the Kabbalah queen of "Ray of Light," the gold tooth thing and the Che thing and the cowboy hat thing and the Jazzercize thing.

Along the way, Madonna has influenced legions of the stars who've shimmied in her wake. But now, all those decades worth of little Madonnas have splintered off and become their own entities. To compare a younger star to icons as diverse as Whitney Houston or Reba McEntire is to evoke a woman with a lengthy career but a relatively consistent sound and image. To say someone is like Madonna poses the question: Which Madonna? These day's we've got Gaga for flamboyant, "Express Yourself"-era Madonna. Katy Perry for both Kewpie Doll "Lucky Star" Madonna and confessional, "Truth or Dare" Madonna. Where once went Madonna's "Erotica," now goes Rihanna, circa "S&M" and beyond. For flirty, dancey Madonna, there's Beyonce. For relentless, magpie-like appropriation of whatever she can get her hands on, have you met M.I.A.? Or is can't-really-sing, self-invented, inescapable Madonna more your thing? Hello, Ke$ha. Hello, Lana Del Rey.

But Madonna's precipitous sales drop isn't some sob story of the perils of growing older in the entertainment industry and being supplanted by newer models. Both Bruce Springsteen and Lionel Richie, after all, have albums currently resting comfortably in the Billboard top 10. Nor is this some sad, mature chick-specific disaster. If it were, Nicki Minaj and Adele would not currently be eating Bonnie Raitt's dust on the iTunes album chart. Nor would Susan Boyle, who only started her career as a talent show dark horse in her late 40s, have racked up three successful albums and a hit musical in the past three years.

Poor album sales be damned, don't cry for Madonna yet. This year alone, she's managed to win a Golden Globe and launch a fragrance, and she's set to embark on a six-month-long world tour. Her influence may now be diluted and her album sales in steep decline, but she'll always find a way to insinuate herself in the pop culture landscape. Her image may be legendarily fluid, but the one thing she's always been consistent about is her steely skill at survival.

But the thing about Madonna is that she has never been entirely Madonna. She's forever just the newest iteration of Madonna. It's easy to imagine the Adele of 30 years hence, deeply matured like the Boss or Elvis Costello, but still delivering husky heartache. Over time, what matters less as an artist isn't so much adaptability but authenticity. And authenticity has never been Ms. Ciccone's strong suit.