Romney vs. Santorum: What their words reveal

As Santorum exits the race, a look at what his and Romney\'s speech patterns say about their candidacies 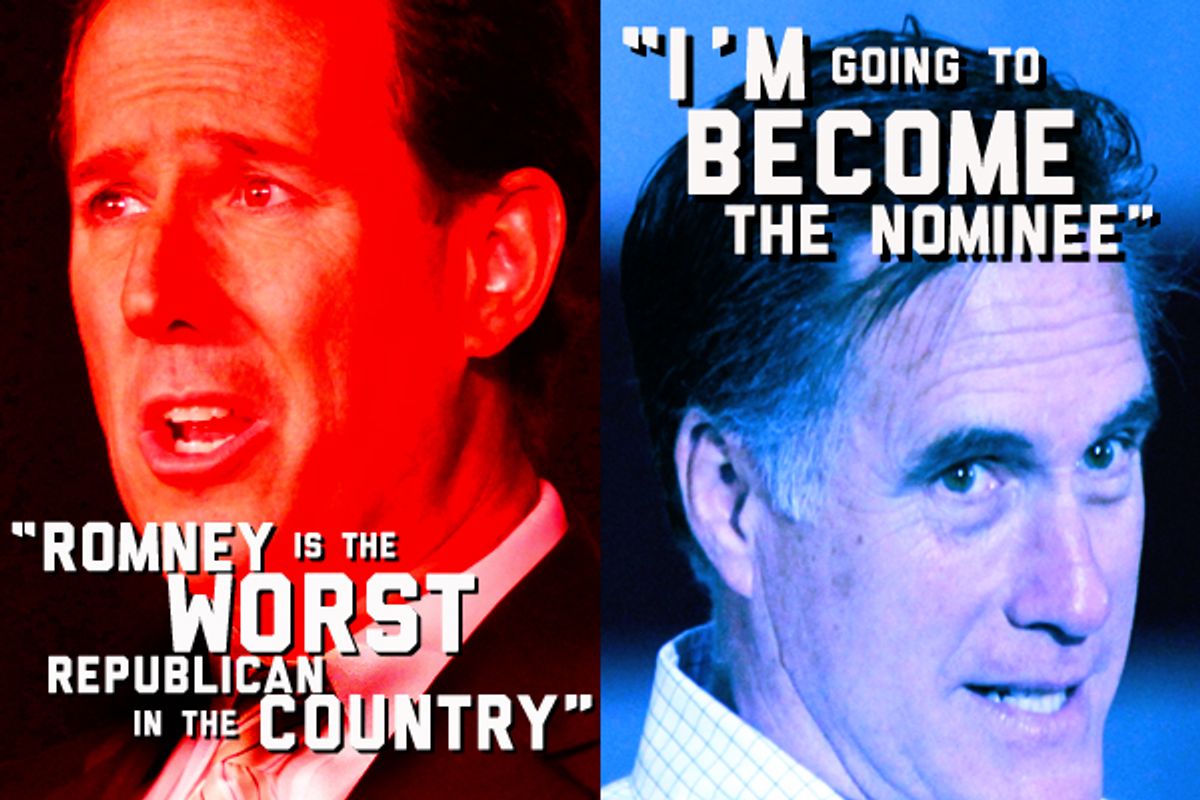 Now that the Romney campaign is officially shaking its Etch-A-Sketch, the name “Rick Santorum” will begin to fade from our collective memory. As he exits the national stage, I find myself wondering what kept him from capitalizing on the “anything-but-Romney” attitude that seemed to define many Republican voters’ attitudes. Money, certainly, was a significant and well-documented driver of the outcome. But what if we sought to understand the primary through a data-driven lens?

An interesting question, for sure, but, as anyone who works with data knows, the first challenge is to get your hands on the numbers. Fortunately, there’s one source of data that politicians are eager to provide in limitless quantities: their words.

In order to make sense of a mountain of words, I created a tool that analyzes the frequency of word and phrase usage in a body of text. The texts in this case were the transcripts of candidates’ speeches and interviews culled from Project Vote Smart between January and early April, creating a corpus of over 80,000 words (roughly the number of words in a 320-page novel). The tool then identifies phrases of one to six words in length that have been used with a non-trivial frequency. So what does it tell us?

On the Primary and the General Election

The popular understanding of the Republican primary was that Romney was more focused on Obama, while Santorum was busy battling Romney. The data bears this out: While both candidates mentioned Obama with high frequency -- 2.2 mentions per thousand (MPT) for Romney, 2.0 MPT for Santorum -- Santorum discussed other Republican candidates (3.8 MPT for his Republican peers) about three and a half times as often as Romney (1.1 MPT). On a related and somewhat humorous note, one of Santorum’s favorite eight-word phrases was “Romney is the worst Republican in the country.” Digging into the actual text turned up a second, related phrase commonly used by Santorum: “make Barack Obama the issue in this [election].” Santorum generally used that phrase to compare “Romneycare” (a word with a relatively high 0.4 MPT for Santorum) with “Obamacare.” By contrast, one of Romney’s favorite six-word phrases was: “I’m going to become the nominee.”

On Job Creation and the Economy

One of the main memes of this election cycle has been “jobs” and “job creation.” (Admittedly, it’s at least a minor meme in every presidential election.) But who talked about jobs more often? Romney did -- more than twice as often, in fact. Romney had a “job creation”-related MPT of 1.7, compared to 0.8 for Santorum.

A related, significant component of the broader discussion on the economy was the subprime mortgage crisis. When it comes to terms that are a part of this discussion such as “Fannie,” “Freddie” and “homes,” Romney was once again the dominant voice, with an MPT of 1.0, well above Santorum’s MPT of 0.2

While Romney addressed specific aspects of the economy more often, both candidates discussed the “economy” with a relatively close (and fairly high) frequency. Santorum’s MPT for economic terms was 1.9, only about 13 percent lower than Romney’s MPT of 2.2.

Santorum used faith-related terms about three times as frequently as Romney did, based on the occurrence of words like “God,” “faith,” “church,” “Christian” and “religion.” Romney had about 0.5 MPT, as compared to Santorum’s 1.4 MPT. Both candidates had good reason to discuss their conservative credentials: Voters and the media constantly questioned Romney’s conservatism, and Santorum’s steadfast conservatism was a competitive differentiator. And yet, it was Santorum who mentioned “conservative” and “conservatism” about 40 percent more frequently than Romney, with an MPT of 1.4 against Romney’s 1.0. In the end, one of Santorum’s clearest advantages -- one that he spoke about with regularity -- did not pay dividends.

As it turns out, both candidates had nearly an identical-size vocabulary across the body of text analyzed. Santorum used 4,088 unique words, while Romney used 4,090. By another measure, however, Romney spoke with more diversity: Santorum repeated 247 two-word phrases more than 15 times each, representing over 20.3 percent of his speech. Romney had just 233 such phrases, representing only 18.5 percent of his speech.

But when it comes to common verbal tics like “uh,” “um” and “you know,” Santorum was the undisputed leader. While transcripts generally don’t include “um” and “uh,” they capture in spades “you know,” “well” and the repetition of common words, such as “the … the.” Romney demonstrated a “verbal tic” MPT of only 6.0, compared to Santorum’s 9.8. In fact, roughly one out of every 200 two-word phrases uttered by Santorum was “you know.” Bringing It All Together

The above analysis allows us to roll up all of these topics into a fascinating side-by-side comparison. It’s important to note that these figures are very meaningful when comparing candidates. When it comes to topic-to-topic comparisons, the results may be deceiving. It’s easy to count mentions of President Obama’s name, for example; it’s much harder to calculate mentions of specific topics -- like jobs or the economy -- that have many different synonyms. Nevertheless, these figures provide a directional, data-driven picture of how much time each candidate spent discussing any particular issue. While the ultimate reason for Santorum’s loss might have more to do with money and momentum, these results point to two possible conclusions. The first (and more likely) is that these differences are exactly what enabled Santorum to stay competitive as long as he did, and that an apples-to-apples choice on economic issues would have sealed Romney’s candidacy earlier. But might Santorum have done better by dedicating more time to jobs and housing? Did he spend too much time attacking Romney instead of focusing on his own positions? Did Santorum’s propensity for verbal tics shake voters’ confidence?

As Romney now rejiggers his message for the general election, he’s likely to emphasize even more the subjects that have been his main talking points throughout the primary: the economy and President Obama. Whether his faith becomes more or less of an issue as Election Day nears remains to be seen. And his discussion of “other candidates” will disappear completely -- unless, that is, you’re counting on another comeback from Newt Gingrich.

Dan Kozikowski writes about the intersection of data and everyday life at dfkoz.tumblr.com.