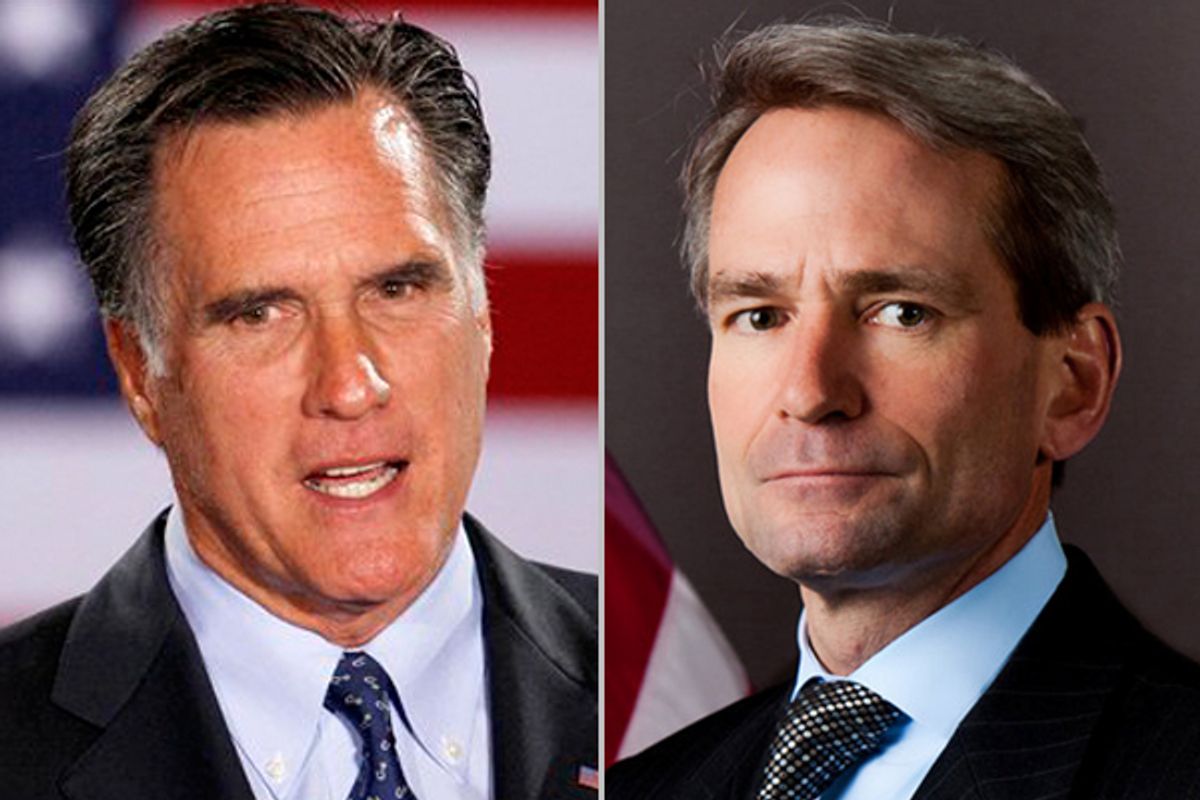 It’s been almost three weeks since the release of a National Labor Relations Board Inspector General report finding that Republican NLRB member Terence Flynn violated ethics rules. Since then, members of Congress from both parties have said the Justice Department should review the allegations. Flynn has bulked up his defense team with a former inspector general of his own -- Glenn Fine, who investigated the Bush DOJ. But there’s been no comment on the scandal from the White House, which promoted Flynn, or from the Romney campaign, whose advisor Peter Schaumber allegedly received secret info from him.

“This is the cronyism and bias that you absolutely don’t want in a government agency,” says Jeffrey Hirsch, a former NLRB attorney who now teaches law at the University of North Carolina. “If [Flynn] found out one of his board staff was giving info to, say, a Democratic former board member,” says Hirsch, “I can’t imagine he wouldn’t fire the person on the spot.” (Spokespersons for the White House and NLRB Chairman Mark Pearce both declined Salon’s request for comment. The Romney campaign did not respond to multiple requests.)

The NLRB, which enforces and interprets U.S. labor law, has become a lightning rod for right-wing attacks. As Salon has reported, the IG found that Flynn leaked info to Schaumber and other conservatives last year, while employed by the NLRB as counsel for a Republican member. After Obama recess-appointed Flynn and two Democrats as new NLRB members in January, Mitt Romney ran a South Carolina TV ad blasting the president for appointing “union stooges.” Schaumber, the co-chair of Romney Labor Policy Advisory Committee, warned at the National Review’s blog that one of those Democrats raised “an appearance of partiality that will undermine public confidence” in his rulings.

But it’s Flynn, not a Democrat, who now stands accused of leaking internal info to private parties with a stake in NLRB cases -- including Schaumber. The report alleges Flynn sent Schaumber documents ranging from internal legal advice memos to an email mentioning a precedent the board might revisit. In an emailed statement, Citizens for Responsibility and Ethics in Washington executive director Melanie Sloan said, “There is no place in government for someone who leaks confidential information and lies to investigators.”

The Romney campaign, which Tuesday devoted a press release to imagining anti-Obama tweets Debbie Wasserman Schultz might have written in 2008, has been silent on the scandal. Not that Romney is above weighing in on NLRB emails: When an internal email came out last fall in which NLRB general counsel Lafe Solomon appeared to make a joke about hurting the economy, Romney called for Solomon to resign. AFL-CIO general counsel Lynn Rhinehart says that contrast is “really outrageous and hypocritical, and tells us a lot about the candidate.” The AFL-CIO launched a Web petition last month urging Flynn to resign, and Romney to cut ties to Schaumber.

Flynn maintains he did nothing wrong. One of his attorneys, Barry Coburn, wrote a letter to the inspector general condemning the report and stating that Flynn’s conduct was “innocuous … a Board member’s or Counsel’s job is not to live in an isolated bubble, but rather to be appropriately available to those outside the agency, and to interact meaningfully with the Board’s constituency.”  Coburn declined further comment.

Former NLRB general counsel Fred Feinstein says he’s not aware of any past allegations of NLRB staff “giving information to specific individuals on one side, but not the other one.” Feinstein notes that he’s not speaking to the merits of the allegations against Flynn, but says that, “The way in which the information flow is handled is an important part of the process, and being careful about that is part of protecting the integrity of the process.” Feinstein adds that when he served as the board’s top prosecutor under President Clinton, “we took that responsibility quite seriously,” because “when it’s compromised, it compromises the ability of the agency to carry out its responsibilities.”

Flynn and Schaumber could face more embarrassing disclosures ahead -- from the House, the Senate, and the Department of Justice. Following the release of the IG report, Rep. Elijah Cummings, the ranking Democrat on the House Oversight Committee, wrote to the committee Chairman Darrell Issa requesting that the committee hold transcribed interviews with Schaumber and with Peter Kirsanow, another conservative former NLRB member named by the IG as a recipient of confidential info. A spokesperson says that Cummings has not received a response from Issa.  (Issa did not respond to Salon’s request for comment.)

The IG report also notes that its investigators only had access to Flynn’s more recent emails. Last week, Sen. Tom Harkin, the chairman of the Senate’s Health, Education, Labor and Pensions Committee, wrote to Flynn requesting correspondence from the past five years. Harkin gave Flynn an April 9 deadline; a committee spokesperson says that the senator has granted an extension, at the request of Flynn’s lawyer, to Monday, April 16.

But the real action could be at the Justice Department. Rep. George Miller, the ranking Democrat on the House Education and Workforce Committee, wrote to the attorney general March 23 requesting a review of the IG report. The same day, the committee’s Republican chairman, Rep. John Kline, noted in a statement that the report “had been appropriately referred to the Department of Justice.” Hirsch says the White House may be avoiding comment on the issue to avoid the appearance of interference with any DOJ investigation.  (A DOJ spokesperson declined to comment.)

Meanwhile, the Labor page on Romney’s website still prominently features an essay by Schaumber, bashing “misguided administrative actions by partisans at the NLRB” and promising that Romney will appoint NLRB members who pursue “flexibility” and “cooperative” labor relations. Hirsch says that as former NLRB members, Schaumber and Kirsanow “knew they shouldn’t have taken that stuff, and they clearly kept accepting it.” The situation is “incredibly ironic,” says Hirsch, “given all the criticism that the board has taken by Republicans” for supposed bias. “There’s no question that this was inappropriate. And so the silence is deafening.”