Guest Post: Peter Van Buren wrote a critical book about Iraq. Now the State Department is waging war against him 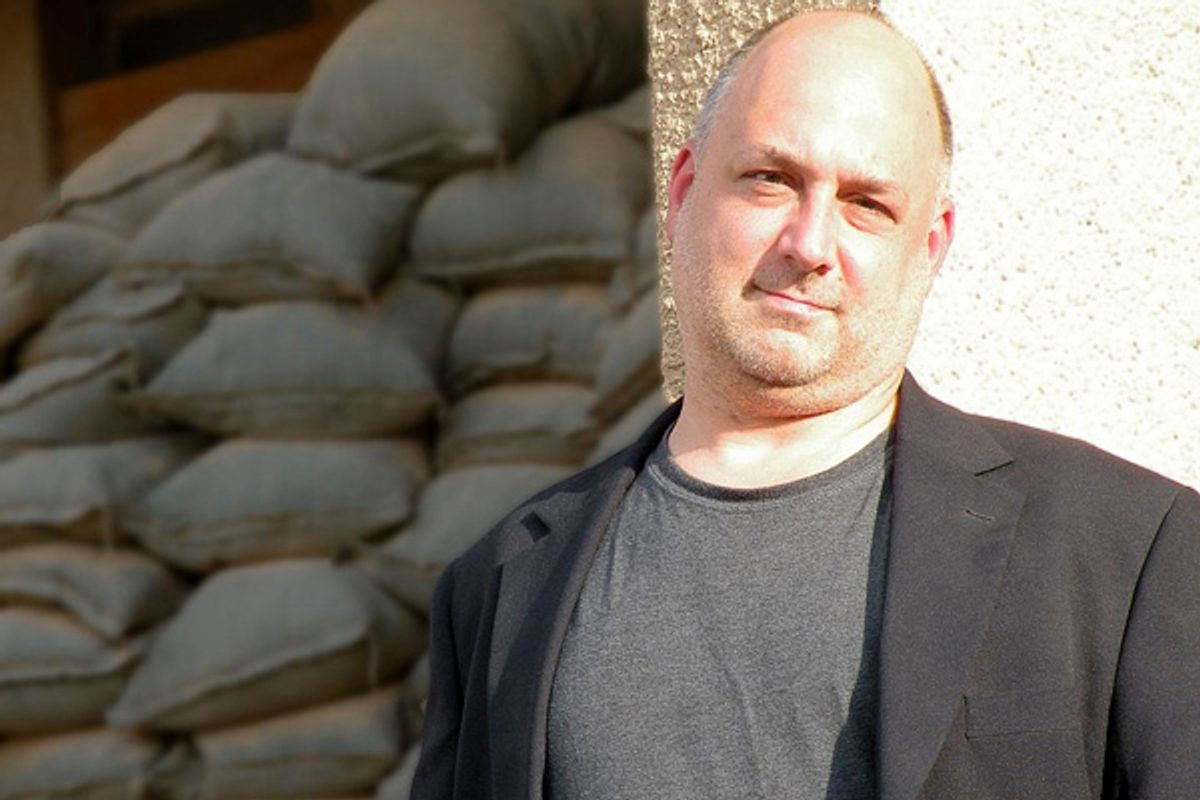 Today, I’m not writing about the Espionage Act being used to chill journalists and whistleblowers, but something equally as troubling: the assault on whistleblowers’ First Amendment rights, illustrated by the creepy case of Peter Van Buren.

Van Buren is a Foreign Service Officer with the State Department who wrote a book critical of U.S. reconstruction projects in Iraq, We Meant Well: How I Helped Lose the Battle for the Hearts and Minds of the Iraqi People (Metropolitan Books 2011). He also maintains a personal blog at www.wemeantwell.com. A 23-year veteran of the State Department, Mr. Van Buren began to experience a series of adverse personnel actions a month before the publication of his book, which are ongoing today. These actions include suspension of his security clearance, confiscation of his Diplomatic Passport, being placed on administrative leave, being banned from the State Department building, losing access to his State Department computer, and being reassigned to a makeshift telework position better suited for a high schooler.

The State Department cleared Mr. Van Buren’s book by default because State exceeded its own 30-day deadline by nearly a year. Now the State Department is retaliating against him viciously for his book by taking adverse personnel actions — ostensibly based on not seeking pre-publication review for his blogs and live media appearances, done on his personal time — which are being used as a pretext to punish him for his book.

Even more disturbingly, the State Department admits that it is actively monitoring Mr. Van Buren’s blogs, Tweets and Facebook updates that he posts during his private time on his personal home computer.

Read that sentence again to absorb its full impact.

All government employees should be alarmed by this. Peter Van Buren’s book dovetailed with WikiLeaks’ bursting onto the world scene, and the government’s assault on whistleblowers with the full force of the entire Executive branch.

The WikiLeaks Edicts Transmogrify into Censorship

This slippery slope, which has now turned into a sheet of ice, began with the State Department announcement on November 26, 2010, that Department officials are authorized to view WikiLeaks documents for “legitimate work reasons . . . using either the Department’s unclassified computer network (OpenNet) and associated peripheral devices or home computers.” No problem there.

But less than three weeks later, State almost completely reversed itself, instructing the Directors of the Bureau of Consular Affairs/Passport Services (CA/PPT)—whose self-described mission is to “contribute significantly to the USG goal of promoting international exchange and understanding . . . [and] to help American citizens engage the world”—that “PPT employees shall not access any classified documents, including ‘Wikileaks documents’, during business hours or on their personal time.” (Scare quotes in original.)

A year later, Mr. Van Buren received his very own, personalized Orwellian directive from the State Department: “[Y]ou must comply fully with applicable policies and regulations regarding official clearance of public speeches, writings and teaching materials, including blogs, Tweets and other communications via social media, on matters of official concern, whether prepared in an official or private capacity.”

As a former government employee who was subject to horrible surveillance and monitoring for blowing the whistle (described in my new book for which Glenn Greenwald wrote the Foreword, I find it outrageous that a public servant is being told that his personal blogs, Tweets, and Facebook updates done on his own time in his personal capacity must go through pre-publication review. Moreover, in Mr. Van Buren’s case, this special pre-clearance requirement is being applied only to him and to things not capable of pre-publication review, such as live radio broadcasts.

Death by a Thousand Paper Cuts: The Slow Immolation of a Whistleblower

On September 7, 2010, Mr. Van Buren submitted his book manuscript for pre-publication review. It disclosed numerous examples of rampant reconstruction fraud in Iraq. Mr. Van Buren submitted his manuscript to the State Department’s Bureau of Public Affairs (PA) in accordance with 3 Foreign Affairs Manual (“FAM”) 4170, which governs official clearance of speaking, writing, and teaching. It specifically requires pre-clearance for any speech or writing on “matters of official concern.” The Supreme Court held that an earlier version of the State Department’s pre-publication review scheme was valid in a case called Weaver. However, the current regulation is outdated, vague and overbroad, defining “matters of official concern” as matters that “relate to any policy, program, or operation of the employee’s agency or to current U.S. foreign policies, or reasonably may be expected to affect the foreign relations of the United States.” Matters that relate to U.S. foreign policies can be just about anything.  Also, Weaver was decided years prior to the advent of social media, and such a requirement on new media is more constitutionally-questionable than when applied to traditional publications.

A couple weeks before Mr. Van Buren’s book was published, the State Department’s Diplomatic Security (DS) interviewed Mr. Van Buren on a “voluntary basis.” DS asked Mr. Van Buren about his forthcoming book and a blog he posted on August 25, 2011. (Mr. Van Buren had been blogging without incident since April 2011 and the questions regarding his blog post were clearly a pretext to interrogate him about his book and intimidate him from promoting it.)

The week before his book’s publication, DS interrogated Mr. Van Buren on a “compelled basis” regarding his book and the August 25, 2011 blog post. As to the book, DS grilled him about the details of the publishing contract, including how much of an advance he received and to whom, if anyone, he donated the proceeds. (If you listen closely, you can hear government strains of “material support for terrorism” lurking in the background.) As to the blog, DS wanted to know who had helped him with his blog and told him that every blog, Facebook update, and Tweet by State Department employees had to be pre-cleared by the Department prior to posting. DS told Mr. Van Buren that refusal to answer their questions could lead to his firing. They also warned him against writing about the interrogation, saying he could be charged with interfering with a government investigation if he did so.

After his book had been shipped to bookstores, the Bureau of Public Affairs wrote to his publisher stating that “its circulation and publicizing have been done without authorization” and that “[t]he Department has recently concluded that two pages of the book manuscript we have seen contain unauthorized disclosures of classified information.” Although the State Department tacitly admitted (with the word “recently”) that its designated period for pre-publication review had expired, this fax constituted a direct threat of discipline because unauthorized disclosure of classified information is both a regulatory infraction and a criminal felony that can carry up to 10 years in prison under . . . wait for it . . . part of the Espionage Act, the government’s new favorite tool to use against whistleblowers.

When criminal threats failed, the State Department confiscated Mr. Van Buren’s Diplomatic Passport and suspended the Top Secret security clearance he had held continually since 1988 (by suspending, rather than revoking his security clearance, the State Department made it impossible to challenge.) He was issued a workday-only limited-access badge so that he could continue his unclassified work.

It was not long, however, until Mr. Van Buren was placed on paid administrative leave, on which he remained for nearly two months with no job duties or assignment. His access card was confiscated by Human Resources (HR), and he was banned from entering any State Department facility or accessing any State Department computer. (No reason was given for banning Mr. Van Buren from State Department facilities, and no regulation was cited justifying HR in doing so.) The State Department ended the job assignment that Mr. Van Buren had served in for over a year (with the Board of Examiners for the Foreign Service) because “You have been counseled repeatedly regarding your 3 FAM 4170 obligation to submit writings and media appearances for review when they pertain to matters of official concern.” This is disparate treatment because numerous Foreign Service Officers maintain blogs and post Facebook updates about matters of official concern without pre-clearance. Moreover, it is impossible to pre-clear the content of live media appearances before they occur.

At the end of 2011, the State Department informed Mr. Van Buren that he would be “teleworking,” and forced him to sign an unprecedented “compliance statement” as a condition of employment, referenced above: “[Y]ou must comply fully with applicable policies and regulations regarding official clearance of public speeches, writings and teaching materials,including blogs, Tweets and other communications via social media, on matters of official concern, whether prepared in an official or private capacity.”

Long story short, Mr. Van Buren continued to exercise his First Amendment rights to blog, Tweet, speak, and use Facebook. And he continued to be jacked up over things that would be laughable if they were not so serious, like blogs that were sarcastic or pure parody.

The end is so cliché: the State Department has now proposed removing (bureaucratese for “firing”) Mr. Van Buren, a mere six months before his already-announced retirement date.

We can only hope that the government’s attempts at prior restraint and blatant censorship don’t become cliché.