Lessons of a reluctant hunter

A transplant to Oregon teaches me about growing up in rural Mexico, killing iguanas and grilling chicken 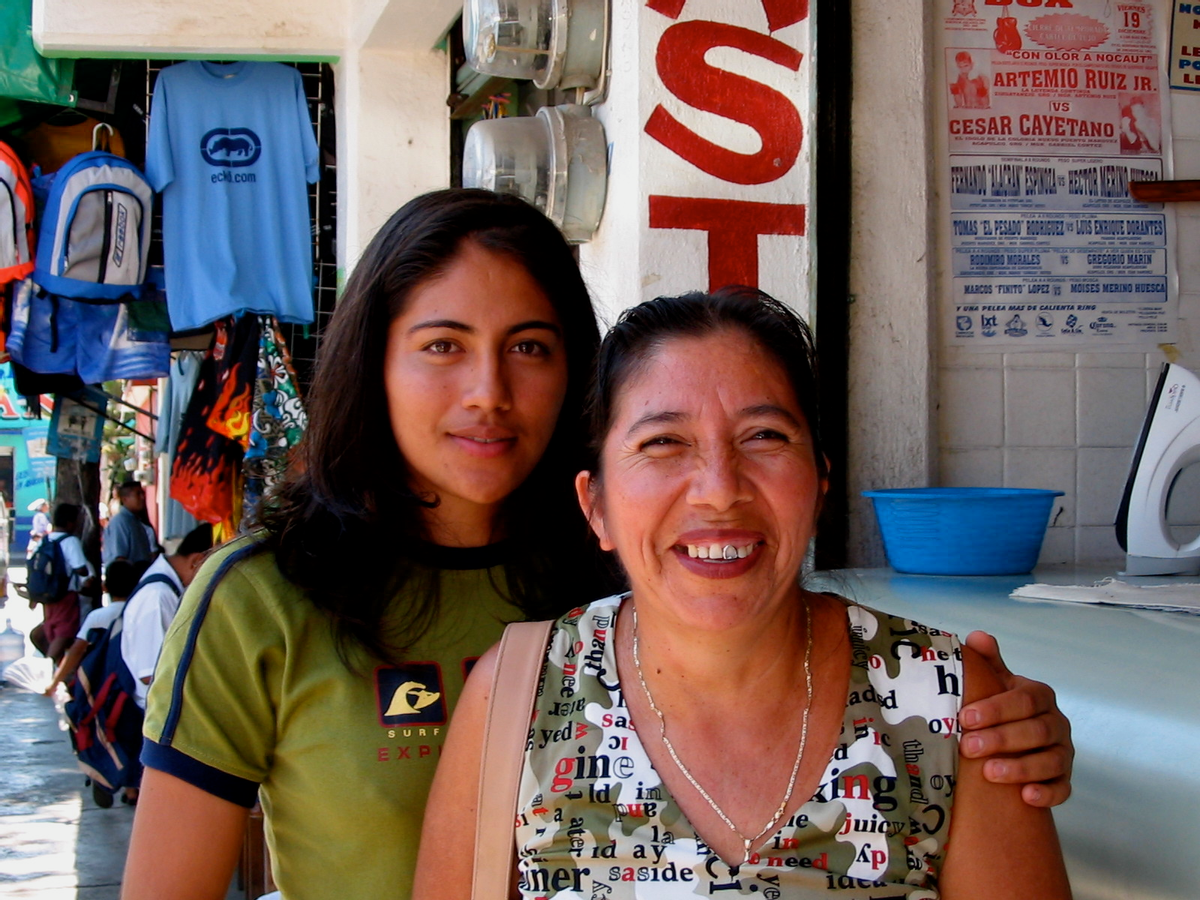 Jazmin Rudin with her mother, Esperanza
--

Jazmin is 27 years old and beautiful. She has the fierce, dark beauty of a Mexican Indian, but she’s tall, and when you see her move, you think Masai warrior or maybe ninja. And it’s true: She does have ninja skills. When I first met Jazmin, she’d just killed a pheasant. She was sitting on the deck talking with a friend when she spotted the bird at the edge of the yard, 20 feet away. She casually picked up a two-by-four and hurled it. The missile hit the pheasant in the head, a neat kill. Jazmin walked over and picked it up. “Dinner,” she said.

She says she doesn’t particularly like killing animals, but she does kill from time to time, if she has good reason. A deer invaded her garden and she killed it with a machete, and she sometimes nets fish in the surf near her home on the coast of Guerrero, Mexico. It’s a skill born from practice and necessity: She grew up rural and poor. Her father abandoned her family when she was 8, and her mother, Esperanza, had to find a way to support seven children. “We ate a lot of natural things,” she says. “Things from the forest.  My brother used to kill iguanas. I’ve got a good iguana recipe if you want it. It’s the best meat as far as I’m concerned. There are two types of iguana: green and black. The black is good to eat. The green is too beautiful to kill. Last winter I found a big black one in my house! Can you believe it? The way you kill them is you step lightly on their heads and then pull on the tail.”

Humans worship athleticism, talent and perfection. We have a fascination with the tiny fraction of people who stand on the other side of the line that separates life from art: the grand master, the prima ballerina. We are drawn to people who embody something of the divine; the ones who, through their grace and inspiration, remind us that to be alive is majestic. Often these heroes in our spotlight are athletes. Sometimes they are leaders — warriors, politicians or rebels. Sometimes they are great chefs or composers or guitarists. But outside the spotlight and the enchantment of our collective worship, there are other artists, who turn mundane actions into magic, who approach humble tasks with perfect artistry. The masters of skills born of necessity and perfected to fulfill a pride that is autonomous from credit or accolades, a pride based on the perfection of the action itself, the economy of movement, the swiftness of results.

Jazmin Rudin is one such person. She possesses the grace and determination to execute any task at hand with astonishing efficiency. For example, she hunts shrimp in the river with a homemade metal spear. ”You take a long sharp piece of metal, filed at the end. It has to be really sharp. You attach that to a piece of surgical tubing so it snaps back to you when you throw it,” she says. She mimes aiming a spear, and remarks that on a good day she can spear two kilos of shrimp this way. I express disbelief. She shrugs.

“It’s a cultural thing. If you learn when you’re really little it’s easy enough. You have to learn because the shrimp are not going to come to your house and knock on your door.” She explains her technique: “The shrimp are under the rocks. You go underwater, and lift each rock. Don’t lift it all the way. You need to lift gently so they don’t see you.” She’s a demonstrative teacher. She talks slowly, and pauses to make eye contact. She’s checking to make sure I understand her. To help me get it, she uses hand motions. “They also like to hide in the roots of the trees that grow into the river; they hang out in there, caved up. Before you go for it, you have to check out all the potential exits they might have.” She mimes looking around and adds, “Sometimes you have to grab them with your hand, which can be prickly. But I say no! You’re for me. I don’t care if you bite me, you’re not escaping me!” She laughs. “But really, it’s all about taking aim. Just like hunting with a gun. When everything is correct you’ve got your shrimp.”

But hunting isn’t Jazmin’s only talent. The lectures on killing iguanas and spearing shrimp are just digressions: I’m here in her Oregon kitchen for a lesson in grilling chicken, estilo Mexicana. She learned this recipe for pollo asado from her mother, who raises chickens. Her mother learned it from her grandmother. Both women have lived their entire lives in the same small Guerrero village. Jazmin describes her grandmother as “muy antiquada,” or very antiquated. “She has Indian ways, folk ways,” Jazmin says. “There’s something a little witchy about her.”

Jazmin starts by butterflying a chicken thigh with a deft stroke of her knife. When I admire her technique she says, “My mother always says: ‘I know how to cook chicken, but you are the chicken maestro.’” There’s too much delight and humor in Jazmin’s countenance for this revelation to sound boastful. Besides, as I watch her demonstration, I realize she’s just stating a truth. “Take the leg,” she says. “Find the thickest part and slice it open, like so. Don’t cut it all the way through. Leave a layer of flesh so that you can fold the meat back. When you fold it open, the bones and meat are on one side, and there’s pure meat on the other side. You want to cut it so both sides are of equal thickness.” She slams the chicken leg flat on her cutting board. “Chickens prepared this way absorb more sauce,” she says and gives me a challenging look. I’m not about to argue with someone who can kill living shrimp with a handmade spear.

After salting the butterflied chicken legs and breasts, she sets the meat aside in a bowl and works on the sauce. “You’ll want to put seven dried chiles guajillos to soak in a bowl of water,” she says, helpfully adding, “It’s important to soak the chiles first, because it helps the chile to retain the red color.” She assembles her spices: powdered oregano, cumin seed, ground cloves and whole peppercorns, which she’ll grind in a stone mortar and pestle, or molcajete. The basalt bowl stands on its own three legs; the grinding stone is the size and texture of an avocado. “In Mexico everyone has the rock,” she says, laughing. “But if you don’t have a molcajete, use the blender. It’s not quite the same, but it works.” To make the sauce, she places two cloves of garlic and strips of wet chile in the molcajete, and then deftly adds spices and water a little at a time. The finished result is a uniform liquid, which she ladles over the chicken.

While the chicken marinates and the grill heats, we talk. Jazmin’s pueblo on the coast of Guerrero sounds a lot like the village in coastal Jalisco where I spent part of my childhood. It’s a rural culture, rooted in farming and fishing and family. Jazmin has always felt different from the other girls in town; she’s never cared for makeup or clothes. “I’m old-fashioned like my grandmother,” she admits. But although her values may be old-fashioned, she’s not exactly a textbook campesina: Her great joy in life is surfing, she raves about Hank Williams III, and she’s taught her dog, Rambo, to ride on the front of her four-wheeler. She married Mark, an older guy from Oregon, when she was 19, so that could help explain her cultural idiosyncrasies. But as I watch Jazmin laugh uproariously at a silly joke, it strikes me that even without the foreign influence, she would have been an oddball. She’s one of those rare individuals who always cleaves true to some inner compass.

“The secret to barbecuing chicken is to make sure the flame isn’t too hot,” she says, holding her hand over the gas grill, which she views with some contempt. We’re standing on a back porch in Bend, Ore., and Jazmin has been waxing poetic about the superiority of Mexican chickens. “In Mexico, we get a chicken that’s been killed that day. And it’s double good when you grill it over real coals; these gas grills have nothing on real charcoal.” She slaps a chicken thigh on the grill. “Keep turning the chicken over and over again,” she instructs. “It’s a totally different style. Not as juicy maybe, but more flavorful.” She’s right; when we pull the chicken off the grill a scant 20 minutes later, the meat has a satisfying, chewy texture and the flavor sings, savory and complex. Jazmin gives me a look, as though to say, “I told you so.”

“What do you call this recipe?” I ask.

“It’s called pollo asado,” she says, grinning. Grilled chicken. The answer is pure Jazmin: no nonsense and uttered with the easy confidence of a maestro. Like any great artist, she knows to let her work speak for itself.