For a show known for its subtlety, this season has been filled with obvious, stagey moments 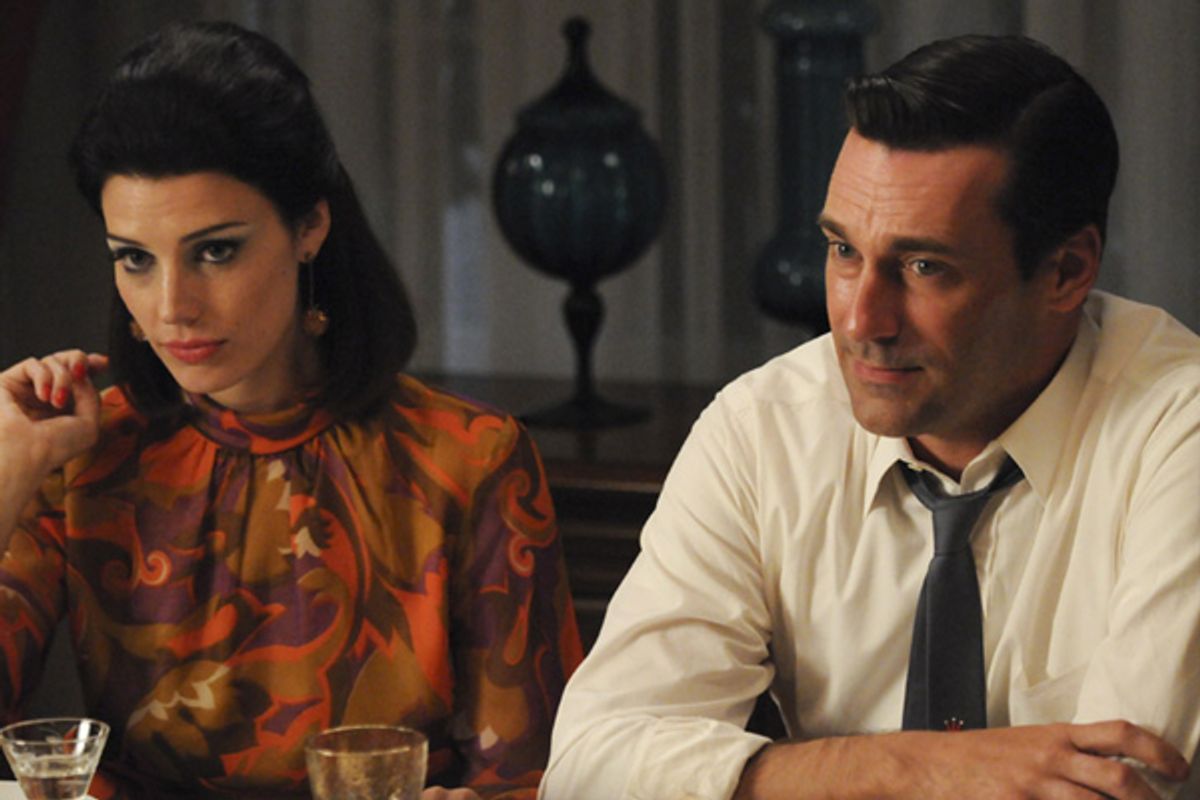 In the run-up to “Mad Men’s” fifth season, series creator Matt Weiner said over and over again that one of the year’s big themes would be "When does everything get back to normal?” -- the idea that epic, necessary changes don’t always feel real, not to mention welcome, to the people they’re happening to. Four episodes into the new season, I’m wondering a similar thing: When will “Mad Men” get back to normal?

In past seasons, strings of episodes went understatedly by, only occasionally punctuated by the sudden shock of an office-based John Deere tractor incident. But every episode this season has contained at least one big, showy, bringing-down-the-house scene or talking point— and I’m not just talking about the infamous "Zou Bisou"— along with a sort of heightened, antic energy. What was previously subtext is now often text (the season opened with a racist water balloon incident cribbed straight from the New York Times, which may have made it real, but didn’t make it particularly subtle) and there’s an increasingly stagey, meaning-laden quality to the dialogue. The episodes have felt juiced, sloshing-over with meaning. They're vibrating at a higher, frantic frequency than before.

Consider: In Episode 2, we were introduced to the twitchy, neurotic, Jewish copywriter Ginsburg, an endearing character who has all the subtlety of a stampeding elephant doing a Woody Allen impression. That same episode also contained Fat Betty, showcasing January Jones in a neck ruff made of fat and possibly the largest pink house coat ever manufactured. The music playing as that episode faded to black on Betty eating her second ice cream sundae was “The Sound of Music’s” “16 Going on 17,” a painfully on-the-nose reference to what used to be subtext— Betty’s incredible, childish immaturity — as well as a pun on her increasing dress sizes. Then last week, Don fever-dreamed that he had cheated on Megan and murdered the dream-woman, in the sort of fugue that only happens to people in movies and TV shows, ones that look exactly like their lives and have a direct, not even metaphorical, bearing on it. And then, soon after Joan had kicked out her rapey, doctor husband, the episode ended to the song  “He Hit Me (It Felt like a Kiss)."

This sort of thematic transparency and high energy was on display again last night, in an episode that Twitter has noted could be called The Emasculation of Pete. As is typical of this whole season (think back to last week’s round of Peggy-Roger bartering), there were some amazing, deliriously enjoyable scenes, as when Don strips to his T-shirt to fix Pete’s busted kitchen sink, proving once again that Don does his best seducing with his clothes on, and then later, when Lane removes his glasses, put up his dukes and knocks Pete down. But the episode was also single-mindedly, stridently focused on Pete’s downward spiral. After cheating on Trudie, being shown up by Don, beaten up by Lane, and then forced to watch a far more handsome, swaggering high school boy make out with the high school girl Pete had creepily intended to seduce, the episode ends on a close-up of Pete and the very ironic strains of Beethoven’s “Ode to Joy.” Pete's pathetic. Did you know?

I’m more than willing to believe that “Mad Men’s” new, frantic tone is intentional, a reflection both of a more frenzied time and a way to unsettle the audience, not just the characters, with a new normal. And last night’s episode highlighted the extent to which “Mad Men” can’t go back to the old normal. The engine of “Mad Men” through four seasons was Don’s unhappiness, his struggle with who he is and who he appears to be. But Don is now happily married, to a woman whom he adores and who knows about his past. Things have improved so markedly for him that he can sit in a swanky whorehouse, not cheat, and tell the madam the truth about where he comes from: He grew up in a place just like this. In last night's episode, riding in a cab with Pete, who had not abstained at the brothel, Don went so far as to caution him against throwing his marriage away. It’s a brave new world. No wonder everything feels so weird.