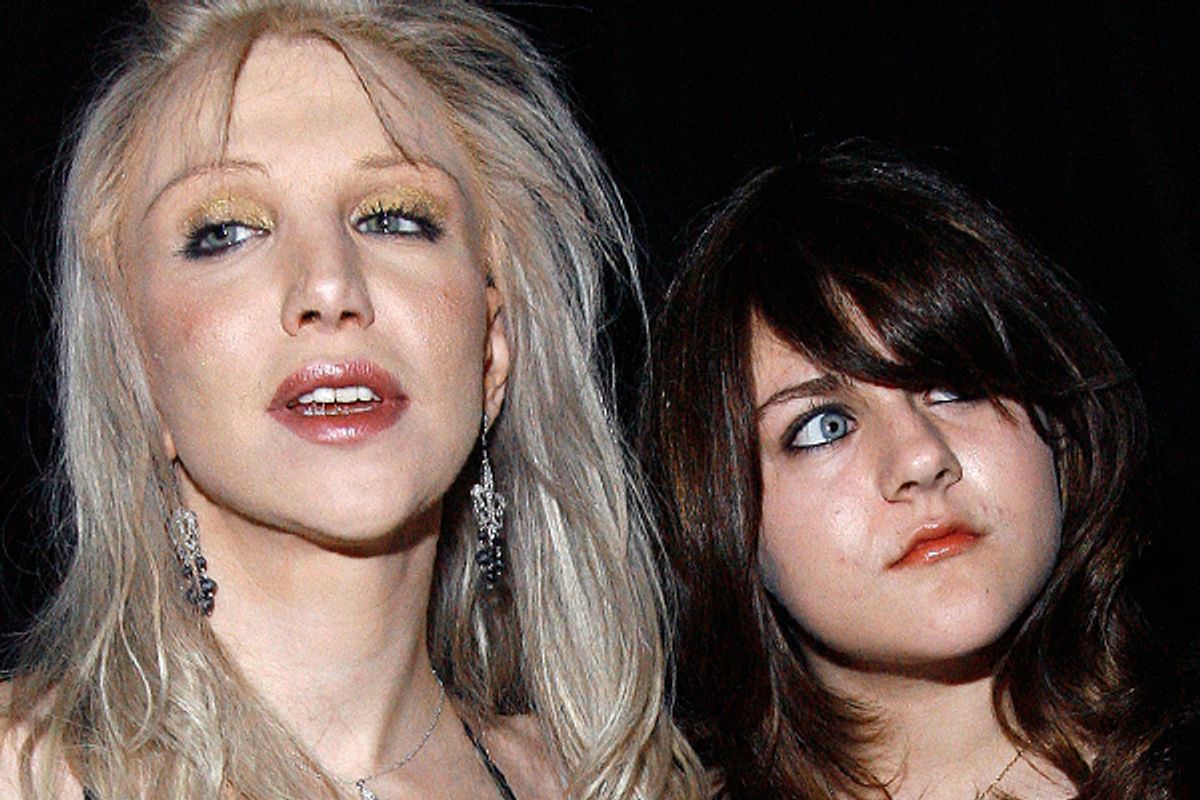 It wasn't that long ago that a generational social media disaster looked like "S#&% My Dad Says." It was amusing, the way The Olds were inadvertently posting on their adult offsprings' Facebook walls and thinking it was email. Look at them, with their lack of technical acumen and their crotchety pleas for assistance! You know what embarrassing your kids looks like now? Courtney Love.

Granted, Ms. Love has never been the traditional SUV-driving, cookie-baking kind of mom who posts incredibly detailed stuff about her baby's poops.  But her recent slew of attention-getting Twitter insanity -- and her 19-year-old daughter Frances Bean's mortified response – suggests we are entering a new era of fail, one in which a parent's awkward behavior isn't of the adorable "What's this button do?" variety. Instead, it may be more like "S#&% My Dad Said At Burning Man."

Love, always a reliable train wreck and nowhere more in her wheelhouse of crazy than on Twitter, ramped it up last week when she accused Dave Grohl of hitting on her daughter in a lengthy series of tweets on her private account. She ranted freely about how angry she'd be "if frances slept with" him, going on about whether "the actual sex" was a rumor and adding that "dave tried to fuck me alot." It was a display that Grohl's publicist described as "Crazy Woman Says Insane Shit No One In Their Right Mind Would Believe." And the young Miss Cobain, unsurprisingly, felt compelled to retort with her own variation on the classic, "Stop it, Mom, you're embarrassing me." Cobain issued a tart statement about "my biological mother," saying that "her recent tirade has taken a gross turn" and adding, "Twitter should ban my mother." She may be the most high-profile person to say it, but I'd wager Cobain is far from the only teenager who wishes Twitter could block her parents.

If you've never Tweeted your conviction that one of the Foo Fighters banged your teenager, congratulations, you're not Courtney Love. But her tirade does represent an emerging dynamic that plays out in subtler ways across social media platforms. I've seen it with my own wincing eyes from parents who include their teenagers among their Facebook friends – and who post freely of their hangovers, their dating disasters, and their overall rock 'n' roll excesses. Those incriminating, spring break-like photos of the half-drunk lady from the party? Yeah, college kid, that's YOUR MOM. It's not that children are likely to be blithely unaware of their hipster parents' lifestyles. But there's a new blurring of the once easy-to-maintain tactful distance between parents and their young adult offspring, one complicated by the fact that many of us are cavorting on the road of excess a mere few steps ahead of our children.

Love has, in her typical fashion, attempted to kiss and make up with her daughter in the same format in which she originally speculated about her sex life – on Twitter. On Saturday, she posted, "Bean, sorry I believed the gossip. Mommy loves you."

Mommy no doubt does. But the Gen-X parents who never quite settled down, who grapple with their own varying levels of maturity, now share the Internet with their teenagers. And the children whose shaky first steps and lost teeth have been documented all over Flickr and Twitter and Facebook are now turning into grown-ups themselves, with their own online lives. And while it's our right as adults to party and to have sex and enjoy life, it's also our job as parents to not be stupid. If your kid is old enough to read, your kid is old enough to be embarrassed by your Twitter stream. That's why Love's meltdown is a cautionary – if extreme – reminder that a typical Old Person Fail may no longer be an adorable "reply all" goof. Instead, it's something that involves more ranting and thoughtlessness and way too much information. In other words, it looks an awful lot like a Young Person Fail.