Attacks on RT and Assange reveal much about the critics 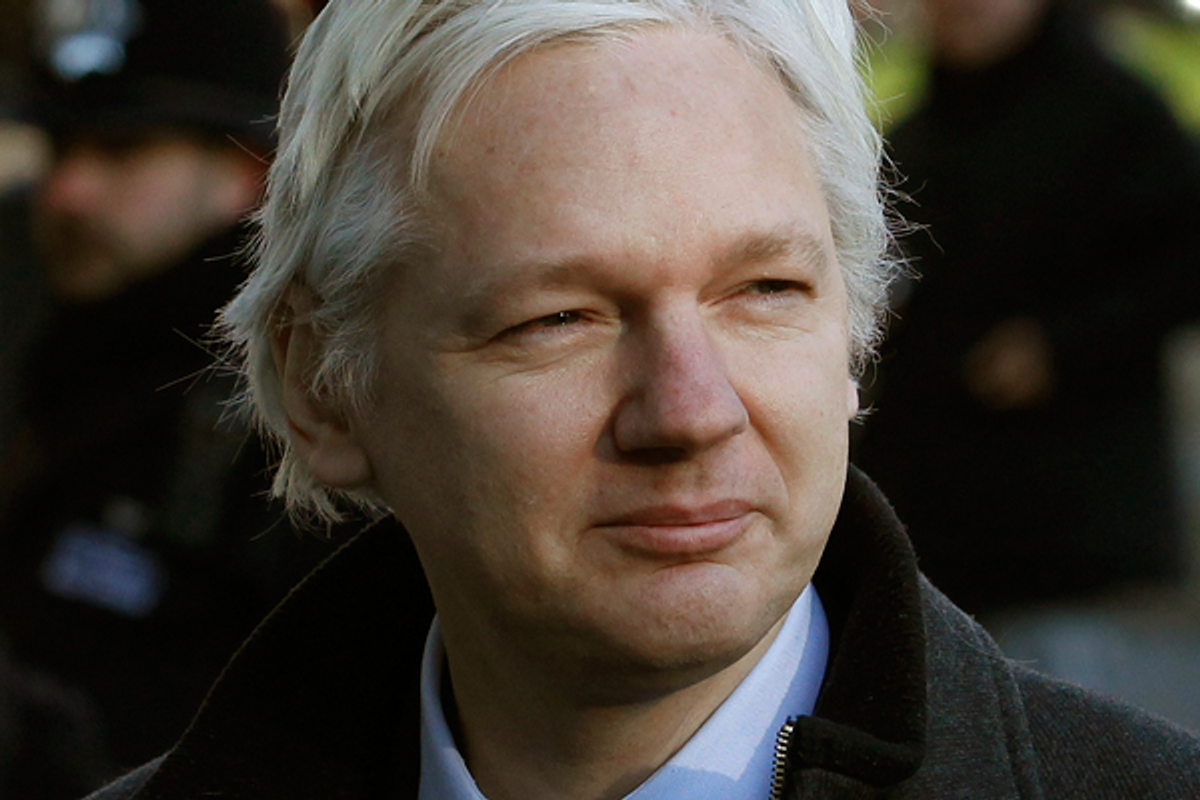 A new news show hosted by Julian Assange debuted yesterday on RT, the global media outlet funded by the Russian government and carried by several of America's largest cable providers. His first show was devoted to an interview with Hezbollah leader Hassan Nasrallah (video below), who has not given a television interview since 2006. The combination of Assange and a Russian-owned TV network has triggered a predictable wave of snide, smug attacks from American media figures, attacks that found their purest expression in this New York Times review yesterday of Assange's new program by Alessandra Stanley.

Much is revealed by these media attacks on Assange and RT -- not about Assange or RT but about their media critics. We yet again find, for instance, the revealing paradox that nothing prompts media scorn more than bringing about unauthorized transparency for the U.S. government. As a result, it's worth examining a few passages from Stanley's analysis. It begins this way:

When Anderson Cooper began a syndicated talk show, his first guest was the grieving father of Amy Winehouse.

Julian Assange, the founder of WikiLeaks, unveiled a new talk show on Tuesday with his own version of a sensational get: the Hezbollah leader Hassan Nasrallah.

That contrast -- between one of America's Most Serious Journalists and Assange -- speaks volumes already about who is interested in actual journalism and who is not. Then we have this, a trite little point, impressed by its own cleverness, found at the center of almost all of these sneering pieces on Assange's new program:

Mr. Assange says the theme of his half-hour show on RT is “the world tomorrow.” But there is something almost atavistic about the outlet he chose. RT, first known as Russia Today, is an English-language news network created by the Russian leader Vladimir V. Putin in 2005 to promote the Kremlin line abroad. (It also broadcasts in Spanish and Arabic.) It’s like the Voice of America, only with more money and a zesty anti-American slant. A few correspondents can sound at times like Boris and Natasha of “Rocky & Bullwinkle” fame. Basically, it’s an improbable platform for a man who poses as a radical left-wing whistleblower and free-speech frondeur battling the superpowers that be.

Let's examine the unstated premises at work here. There is apparently a rule that says it's perfectly OK for a journalist to work for a media outlet owned and controlled by a weapons manufacturer (GE/NBC/MSNBC), or by the U.S. and British governments (BBC/Stars & Stripes/Voice of America), or by Rupert Murdoch and Saudi Prince Al-Waleed Bin Talal (Wall St. Journal/Fox News), or by a banking corporation with long-standing ties to right-wing governments (Politico), or by for-profit corporations whose profits depend upon staying in the good graces of the U.S. government (Kaplan/The Washington Post), or by loyalists to one of the two major political parties (National Review/TPM/countless others), but it's an intrinsic violation of journalistic integrity to work for a media outlet owned by the Russian government. Where did that rule come from?

Also, while it's certainly true that the coverage of RT is at times overly deferential to the Russian government, that media outlet never mindlessly disseminated government propaganda to help to start a falsehood-fueled devastating war, the way that Alessandra Stanley's employer (along with most leading American media outlets) did. When it comes to destruction brought about by uncritical media fealty to government propaganda, RT -- as the Russia expert Mark Adomanis documented when American media figures began attacking RT  -- is far behind virtually all of the corporate employers of its American media critics.

Then there's the notion that there's something hypocritical about Assange's working for a government-owned media outlet because he "poses as a radical left-wing whistleblower and free-speech frondeur battling the superpowers that be." Actually, Assange has never presented him as anything other than as an advocate for transparency and adversarial journalism -- of shining a light on the conduct of the world's most powerful government and corporate factions -- and if that goal can be fulfilled by using this media platform, how is that remotely hypocritical? Then there's Stanley's mockery of a "few" Russian "correspondents who can sound at times like Boris and Natasha of 'Rocky & Bullwinkle' fame": that's called having an accent in a language that isn't your native one, and it's rather petty, at best, to ridicule that as a means of undermining the credibility of RT's journalism.

Next we have this: the apex of revealing, reckless snideness:

The show is unlikely to win high ratings or change many minds, but it may serve Mr. Assange’s other agenda: damage control.

His reputation has taken a deep plunge since he shook the world in 2010 by releasing, in cooperation with The New York Times and several other news organizations, masses of secret government documents, including battlefield reports from Iraq and Afghanistan. Most news organizations edited and redacted the papers to protect lives. Mr. Assange put everything on his Web site. To some he was a hero, to others a spy, but nowadays he is most often portrayed as a nut job. . . .

Perhaps having worn out his welcome, Mr. Assange has left a British supporter’s country estate, where he spent more than 300 days under house arrest, and is now in more modest quarters in the south of England.

Stanley asserts that Assange's "reputation has taken a deep plunge" and then uses a cowardly tactic to call him a "nut job" by asserting, with no basis whatsoever, that this is how "he is most often portrayed." Among whom has "his reputation taken a deep plunge," and who is it exactly who depicts him as a "nut job"? She doesn't say, but most often, those smears come from Stanley's own media colleagues -- led by her paper's former Executive Editor and its most revered war correspondent/cheerleader -- who developed a seething contempt for Assange at exactly the same time that he provided a level of transparency for Western governments greater than all of their efforts combined over the last three years.

In other words, Assange developed an alternative template to the corporate media -- one that was far more independent of, and adversarial to, government power -- and, in the process, produced more newsworthy scoops than all of them combined. As NYU Journalism Professor Jay Rosen once put it about WikiLeaks: "The Watchdog Press Died; We Have This Instead." The mavens of that dead watchdog press then decided that they hated Assange and devoted themselves to demonizing and destroying him. That behavior makes someone a "nut job," but it isn't Assange.

More revealingly still: it is simply impossible to imagine The New York Times using the phrase "nut job" to describe how anyone who exercises actual power in Washington is "most often portrayed." The same is true of the rank speculation Stanley invokes to imply -- without having the slightest idea whether it's true -- that Assange "wore out his welcome" at his prior home: that sort of gossipy ignorance, designed to smear without any basis, would rarely make its way into an article about someone at the epicenter of America's political class. That's because American media outlets are eager to savage those who are outcasts in Washington, but unfailingly treat its most powerful figures with great reverence. Stanley may want to reflect on that the next time she seeks to portray some media outlet other than her own as a subservient tool of state propaganda.

Most revealingly of all, Stanley tacks onto the end of her review, as an afterthought, a couple of passages that completely gut the attack she and so many others have launched at the integrity of RT and Assange:

On his talk show Mr. Assange was a little stiff but sounded rational, didn’t talk much about himself and asked Mr. Nasrallah some tough questions about Hezbollah’s support for President Bashar al-Assad of Syria. He even cited reports, found by WikiLeaks, that suggested corruption and high living among some members of Hezbollah. . . .

[P]ractically speaking, Mr. Assange is in bed with the Kremlin, but on Tuesday’s show he didn’t put out. . . . Unlike RT, Mr. Assange supports the opposition forces in Syria. He took Mr. Nasrallah to task for supporting every Arab Spring uprising except the one against Syria and asked why he wasn't doing more to stop the bloodshed.

So Assange took his first guest -- someone who, by agreeing to be his guest, provided him with an important scoop for his debut show -- and conducted an aggressive, adversarial interview with him: something most American TV personalities would be loathe to do. But not only that, Assange's questions were grounded in support for the Syrian opposition forces and were hostile to the Assad government: exactly the reverse of the Russian government's position, which has maintained steadfast support for Assad.

So we spent the entire article having Assange depicted as some mindless propaganda tool for the Russian government -- an attack on Assange repeated far and wide ever since this show was announced -- only to learn at the end of Stanley's review that, in his very first show, he was highly critical of one of the region's most influential figures for failing to offer more support for Syrian rebels, directly in opposition to a key policy of the Russian government. That's why I say that the media attacks on Assange's show reflect far more about the critics than about him: they assumed that he would slavishly serve the agenda of his benefactors because that's what American establishment journalists largely do. It's pure projection. Speaking of projection, Stanley ended her piece this way:

In his first foray as a talk show host, however, Mr. Assange did everything he could to minimize his prisonlike isolation and behaved surprisingly like a standard network interviewer.

The Kardashians could be next.

Behaving like "a standard network interviewer" is exactly what Assange has never done and will not do. For America's most Serious Journalists, the Kardashinans -- or Amy Winehouse's father -- would "be next." But not for Assange. That's because, as he's repeatedly demonstrated, he's so committed to the goal of actual transparency and real journalism that (like Bradley Manning) he's been willing, literally, to risk his life and liberty in pursuit of it. And that, in the eyes of American journalists, is precisely what makes him a "nut job."

The real cause of American media hostility toward RT is the same as what causes it to hate Assange: the reporting it does reflects poorly on the U.S. Government, the ultimate sin in the eyes of our "adversarial" press corps. A bitter little rant about RT and Assange today in The Guardian from Luke Harding -- one which Adomanis demolishes here -- unveils the real reason for the hostility toward that network. On RT, Harding frets, "The west, and America in particular, is depicted as crime-ridden, failing, and in thrall to big business and evil elites." Oh, perish the thought.

As Adomanis recalled: "Josh Kucera, a journalist who has covered Russia and the former Soviet space, tweeted: 'RT covers the US like US media covers Russia — emphasizing decline, interviewing marginal dissidents'." In sum, RT occupies a similar media space in the U.S. as Democracy Now and Al Jazeera: it covers stories and amplifies opinions which are too critical of the U.S. to be heard in establishment media venues (several stories I've written exposing the bad acts, civil liberties assaults or imperial violence of the Obama administration have been covered there but not by, say, MSNBC). As Kevin Gosztola put it in a great review of Assange's first show: "Critics should come to terms with the fact that the network is biased but yet it does produce segments that provide necessary and sharp critiques of the US government that typically do not appear on mainstream US networks." In other words, like Assange, they engage in real adversarial journalism with regard to American political power. And they are thus scorned and ridiculed by those who pretend to do that but never actually do.