As a new documentary makes clear, social attitudes on pot are half-baked and even dangerous 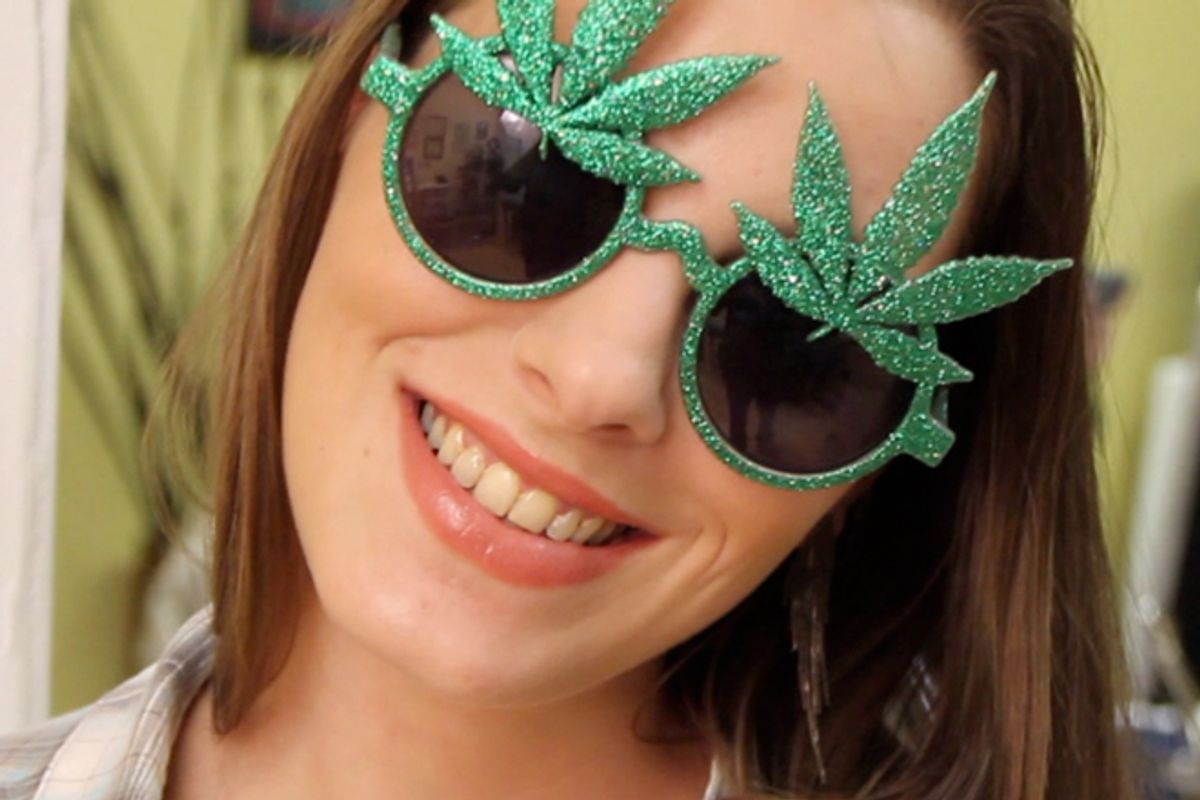 During a road trip to a quasi-legal medical marijuana growing facility in the legendary cheeba-producing region around Mendocino, Calif., a couple of students from Oaksterdam University encounter a cheerful little guy in a cowboy hat known as Human (no other name given). Human assures his visitors, with an ostentatious manner of saying exactly the right thing, that he's growing potent, high-quality "medicine," and he knows that the "patients" are out there waiting for it because they need help. Yeah, they need help -- help getting wicked high, you mean.

This scene occurs most of the way through Dean Shull's scattershot but entertaining documentary "California, 90420," which is sort of, kind of, a movie about Oaksterdam, the institution of higher learning -- ha! I kill myself! -- in Oakland, Calif., that provides the nation's first-ever cannabis-centered curriculum. (Yes, many of our campuses have provided such an education for decades, but none officially.) Although the film closely follows the failed 2010 campaign to legalize and regulate pot throughout the Golden State, it clearly gains currency from the recent federal raid on Oaksterdam, which has put the future of weed-ucation in jeopardy. (While California law allows local municipalities to license medical marijuana dispensaries, growing and selling the stuff remains a violation of federal law.)

I don't know whether Shull intends to debunk the stereotypes surrounding marijuana use or reinforce them, but he does a little of both. While he focuses on a number of characters around Oaksterdam, he can't stay away from 21-year-old Alix (or just "Ix"), a stick-skinny gamine who is profane and funny and clearly intelligent and massively baked almost 24/7. Ix's problem may simply be that she's a kid facing a difficult transit into adulthood (and aren't they all?), but given that she's a bright and talented young person who appears to have abandoned all conventional ambitions in favor of growing, selling and smoking weed -- mostly the latter -- she doesn't make the world's best poster child. "Everything you love in the world will either reject you or die," she tells Shull's camera early on. "But not marijuana." Why didn't they use that in the Proposition 19 ad campaign?

The problem with California's nudge-wink medical marijuana system is the same as the problem with weed-attitudes (weeditudes!) in our culture generally, whether pro or con. You can find the same problem reflected in pop-culture depictions of marijuana use all the way back to the Beats and the bebop era, and right through high-school scare films, Cheech & Chong, George Carlin and Harold & Kumar. That problem is universal hypocrisy, not to mention the difficulty of having any form of conversation about pot without descending into caricature and bad jokes, often abetted by marijuana users themselves.

Whether "California, 90420" means to capture all these contradictions or simply does so with stoner felicity, I cannot say. If you are personally familiar with the dank, the skunk, the Irie and the chronic, by the way, you probably don't need the movie's title translated. If you're not, "420" is longtime West Coast slang for pot smokers and pot culture, reputedly going back to San Rafael High School in the early 1970s. At any rate, we seem to have agreed as a society, for the moment, that we like marijuana being illegal but widely tolerated, disreputable but ubiquitous, associated with subcultures of music and art and surfing and blackness and other things that seem cool but dangerous.

Just to be clear, I grew up in Oakland and nearby Berkeley (so draw your own conclusions about my personal history), and I'm 100 percent in favor of legalizing pot. But California's current medical marijuana law is a total farce, and you can't blame people who genuinely think that drugs are evil for claiming that it amounts to soft-focus legalization. Because it does. Yes, cannabis is medically helpful, and in some cases necessary, for people with cancer or AIDS or glaucoma or certain psychiatric ailments. And of course they should be able to get it. But everybody in California knows that's not how the system works in practice. You find a sympathetic doctor (and the right ones advertise widely), and you say, "Gee, doc, I've been feeling kinda depressed lately. Plus I've been having hella headaches. Kind of seems like a recurring situation, dude." He or she signs something, you get your ID card, and you're gold. Or Purple Urkel, or Diesel Granddaddy Mandala, as the case may be. (Blends of, y'know, medicine that are evidently for sale in downtown Oakland.) As Ix says when she first sees a legal cannabis dispensary, "This is what heaven would be like if God were real."

I suppose there's nothing so morally or ethically troubling about that, as a temporary hack to a vexing social dilemma, that of how to police a substance that does little harm and is widely available but retains a strong stigma in some quarters. Prop. 19, the failed ballot initiative spearheaded by Oaksterdam chancellor Dale Sky Jones and her husband, longtime pot activist Jeff Jones, tried to raise marijuana to the legal but heavily taxed and regulated status of alcohol and tobacco. That was, perhaps, entirely too rational and non-hypocritical an approach to the problem, and (as we see in the film) was resisted by both Northern California's big pot growers and Southern California's most conservative law enforcement officials. Perhaps the most telling moment in "California, 90240" comes when Los Angeles County Sheriff Lee Baca tells voters that if they want to "do a joint" in the privacy of their homes, he doesn't care and doesn't want to know about it. But we still can't have legalization because, as Baca puts it, "You can't pass a law that would be illegal."

That confusion is actually right on point, and reminds us that the current, fudgey social covenant on marijuana allows it to be used as a covert instrument of social control. Baca's version of "don't ask, don't tell" seems like a reasonable complement to the fuzzy status of medical marijuana, but we all know that he and people like him will enforce the existing laws when and how they choose to. If people get high at a backyard barbecue in my middle-class Brooklyn neighborhood, there is exactly zero possibility of the cops giving a crap. If young men who don't look like me get high on the street in a different part of Brooklyn, they could easily get roughed up and spend two or three days in jail, just for the hell of it.

It might sound like pothead paranoia to suggest that President Obama told the Justice Department to go after California's medical marijuana industry because it's an election year and he's willing to trade the freedoms of stoners in Venice Beach and Oakland for a (largely theoretical) handful of blue-collar voters in Ohio and Pennsylvania. But this is the Democratic Party we're talking about, so almost no level of moral cowardice is inconceivable. Obama himself seems way too tightly wound to have been much of a toker (whatever he may say about his Columbia years), and has proven to have little concern for civil liberties of any sort, except as they are deemed to affect electoral votes.

Over the next generation or two, pot will probably become decriminalized, step by step, but for the time being we'll make do with massive hypocrisy on all sides, as depicted half-accidentally in Shull's film. Oaksterdam is in trouble, and Ix never got to teach her proposed class on "bluntology" and the importance of avoiding "canoeing" (you figure it out). On the other hand, she's now a copywriter at NASA, and that joke finishes itself, I think.

"California, 90420" plays this weekend for brief runs at numerous theaters across the country. Check website for complete listings.