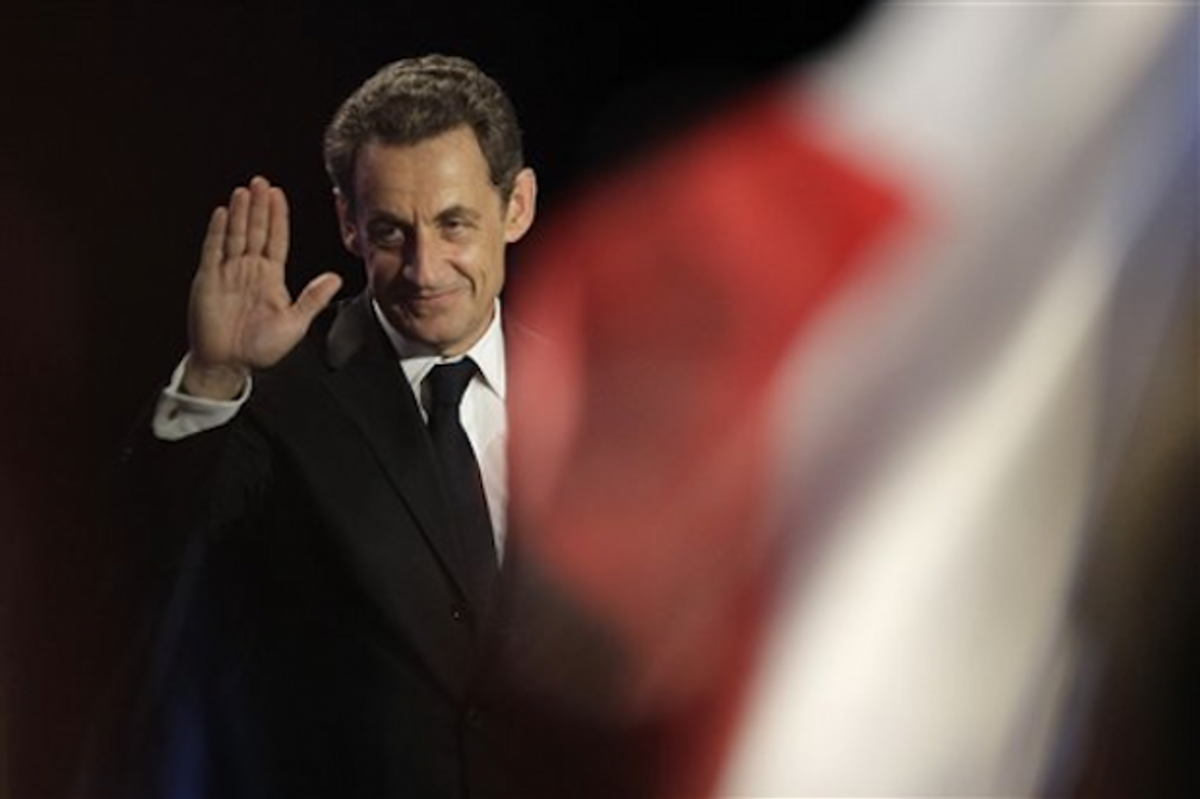 PARIS, France — First Segolene edged out Francois, then Nicolas beat Segolene, before breaking up with Cecilia and marrying Carla.

Meanwhile Segolene split with Francois and he hooked up with Valerie. After Dominique's troubles, Francois humiliated Segolene, but they made up so she can help him beat Nicolas.

The cast of husbands, wives, girlfriends and exes starring in the soap opera sub-plot to France's presidential elections can seem confusing, but Parisian gossip columnists and glossy magazines can't get enough.

With her husband lagging in opinion polls, the incumbent first lady Carla Bruni-Sarkozy is playing an increasingly visible role in the election campaign ahead of the April 22 first-round vote.

The former supermodel-turned-singer-and-actress gave birth to President Nicolas Sarkozy's daughter Giulia in October. Her frequent campaign appearances and interviews have sought to present a kinder, gentler side to the notoriously tetchy president.

"Thanks to Nicolas I'm living an extraordinary adventure," Bruni-Sarkozy told Elle magazine recently in an interview in which she described how the president toils all-hours for the nation's good, respects women and loves listening to her play guitar.

"This position has given my life a new dimension," she went on. "In the middle of these serious crises, it allows me to understand the decisive issues of our country, so I can open people's eyes to the lives of others, the French, and to listen more to their problems."

Meanwhile, journalist Valerie Trierweiler has added a splash of glamor to the campaign as the partner of Sarkozy's main challenger Francois Hollande. A self-declared "ordinary guy," the Socialist candidate is leading in the polls, but is often derided as being rather dull. Trierweiler is credited with getting her man to lose some weight and dress a tad more snappily.

"That's not true. He lost weight on his own and I loved him just as he was, even if he was carrying a few too many kilos," Trierweiler said in her own interview with Elle. "I felt no need to change him, what I love in him goes well beyond all that."

Trierweiler has been matching Bruni-Sarkozy for the media's attention. The website aufeminin.com ranked the "fashion potential" of the "confidently elegant journalist" against Bruni-Sarkozy, an "artiste with top-class allure." Taking into account such factors as "cool attitude" and "potential to seduce the French," the "world's leading online publisher for women" declared Bruni-Sarkozy the winner, but only by two points.

Trierweiler also has to face competition for the spotlight from Hollande's ex.

Segolene Royal was Hollande's partner for more than 20 years. They had four children together and followed parallel careers through the Socialist Party hierarchy until she edged him out of the running to become the party's candidate in the last presidential election. On the eve of Royal's defeat to Sarkozy in 2007, the couple announced they were no longer together.

Hollande had his revenge in last year's Socialist Party primaries, scoring more than five times as many votes as Royal. Her decision to join him on stage at a campaign rally last week was a major media event.

"The cause we're defending is bigger than us," Royal told reporters. "That's what allows us to put the past behind us and look to the future."

Over in the Sarkozy camp, the president's supporters have been accused of using the president's ex-wife Cecilia Attias as a scapegoat for the bling-bling lifestyle that marked the start of Sarkozy's term and have been a persistent source of criticism ever since.

She was the one behind the president's Ray-Ban-and-Rolex style, says a new biography of Sarkozy. The cruises on a billionaire's yacht and dinners in a swish Champs-Elysees restaurant "were all to please Cecilia," said a pro-Sarkozy lawmaker quoted in VSD magazine last week. "He was really in love and wanted to reconquer her," the anonymous politician added.

Beyond all the electoral tittle-tattle, Bruni-Sarkozy and Trierweiler have both tried to make serious points about the role of women in France. Trierweiler tweeted in disgust that she was being reduced to political arm candy when Paris Match, the magazine she writes for, ran a photo of her under the headline: “Francois Hollande’s charming asset."

Trierweiler has praised Bruni-Sarkozy as a role model for managing to combine raising a child with her duties as first lady, charity work and a career. Bruni-Sarkozy also came to Trierweiler's defense after suggestions she should curtail her career due to her relationship with Hollande. Trierweiler has shifted her journalistic focus from politics to culture during the campaign.

Meanwhile another famous journalist and politician's wife is poised to make her comeback on French TV screens on election night. Anne Sinclair, editor of the French edition of the Huffington Post, will comment on the results for BFM TV.

She's married to Dominique Strauss-Kahn, who had been the Socialist Party candidate frontrunner until he was accused of assaulting a maid in a New York hotel room last May.

Although those charges were dropped, the scandal ruined DSK's political career. He is now under investigation in France over allegations of involvement in a prostitution ring.