The resurrection of Hillary Clinton

4 years to the day after hitting rock bottom, a new poll confirms just how dramatically her image has improved 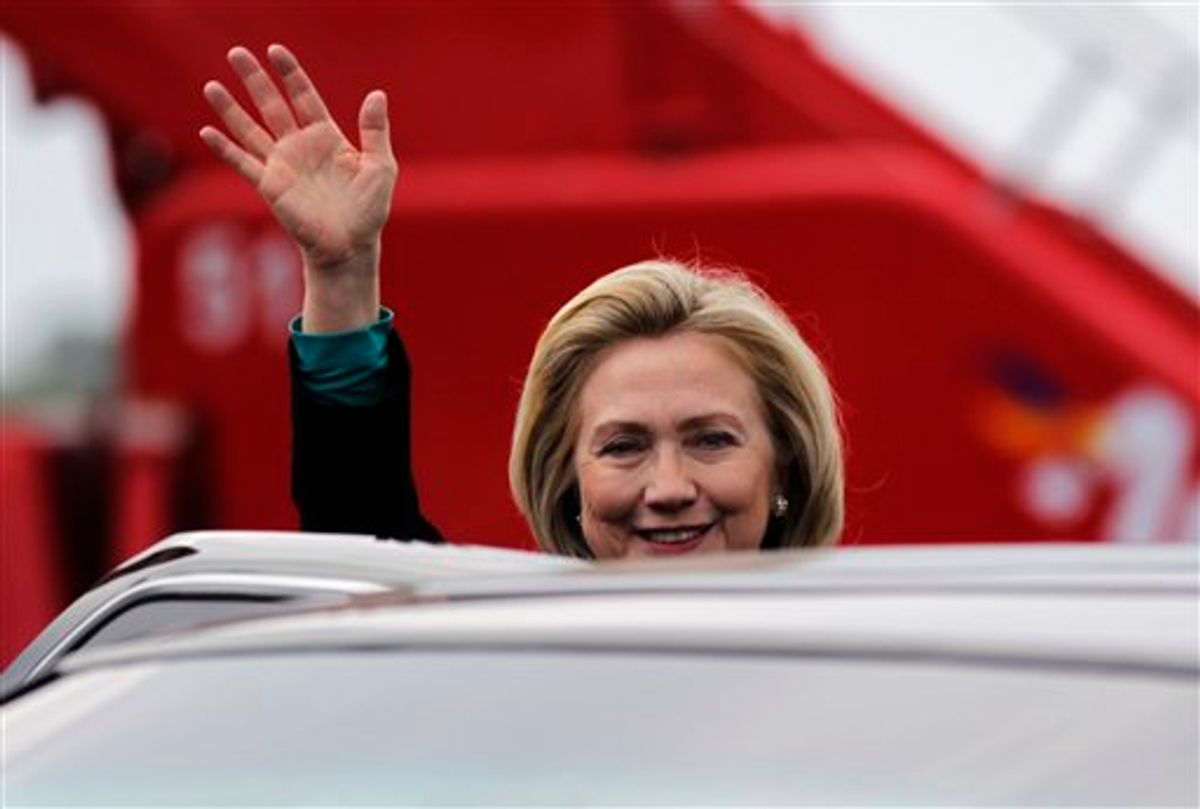 U.S. Secretary of State Hillary Clinton waves as she arrives at the airport in Cartagena, Colombia Friday April 13, 2012. Leaders of the western hemisphere will attend the 6th Summit of the Americas in Cartagena this weekend. (AP Photo/John Vizcaino, Pool) (AP)
--

Between the “Texts from Hillary” phenomenon, a Maureen Dowd column celebrating her “cool” image, and some widely-circulated photos from Colombia that seem to confirm Dowd’s point, the past few weeks have been pretty good to Hillary Clinton. And now comes a poll showing her absolutely destroying every other Democrat now being mentioned in connection with the 2016 presidential, including the sitting vice president.

Obviously, the numbers are meaningless in terms of the ’16 horserace, but they do illustrate how thoroughly Clinton has recovered from her low moment in politics.

Four years ago this week, as she pressed on with her presidential campaign despite falling hopelessly behind in the delegate race, an ABC News/Washington Post survey found that 54 percent of Americans viewed the former first lady unfavorably – the highest negative score she’d ever received since ABC/WaPo had begun polling about her in 1992. The perception, valid or not, that her campaign was willing to take the low road against Barack Obama was taking hold; in the same poll, nearly 60 percent of voters said they doubted her honesty.

But now all seems forgiven. Since Barack Obama made her his secretary of state, Clinton’s favorable score with all voters has routinely topped 60 percent. And as PPP’s survey shows, whatever intraparty damage was done by her campaign against Obama has not endured:

Clinton's appeal to the various different constituencies of the Democratic Party is pretty universal. She's at 58% with 'very liberal' voters, 56% with moderates, 60% with women, 52% with men, 59% with whites, 54% with African Americans, 51% with Hispanics, 64% with seniors, and 44% with young voters.

The last time Clinton was as well-liked as she’s been for the past few years was at the height of the impeachment saga of 1998 and 1999, when a sympathetic public rallied to her side. Her polling resurgence is testament to a few obvious factors: She’s not an active candidate for office, she’s free from the day-to-day partisan wars of the Senate, and she’s in a job now that elevates her above domestic politics and gives her stature that few in public life enjoy.

There’s something else at work, though: Her last name is no longer a curse word to Republicans. This is something that is new to her, and her husband. For their first 16 years on the national stage, from Bill’s 1992 campaign to the end of Hillary’s '08 effort, the Clintons were the most prominent leaders of their party – meaning that Republicans were, as a general rule, devoted to destroying them. It’s easy to forget now, but the same right-wing hysteria and resentment that has been present for Obama’s presidency used to be directed at the Clintons.

This attitude persisted long after they left the White House. With a Republican succeeding Bill, the Clintons remained the face of their party, and with Hillary in the Senate, it was considered just a matter of time before they sought a restoration. In the early days of the 2008 campaign, conservatives actually tended to portray Obama in friendly terms; he would soon be run down by the Clinton machine, they assumed, so it made sense to paint him as a well-meaning idealist being victimized by the real enemy. Only when it dawned on them that Obama, and not Clinton, would be the nominee did the conservative caricature of Obama that now prevails take hold. At the same time, Clinton assumed a new role: the reasonable Democrat who’d been spurned by a radicalized, Obama-entranced party.

This may be the single biggest factor in Clinton’s dazzling poll numbers. For four years now, conservatives have basically left her alone, and in some cases even sung her praises. The drumbeat of hostility that gave her a reputation for being “polarizing” and that led Democrats to question her electability has stopped. Occasionally, a conservative will launch the sort of attack on her that used to be common, like when a Heritage Foundation official went on Fox News this week to call her conduct in Colombia “embarrassing.” But these are isolated episodes; they used to be relentless, coordinated assaults.

If she were to run for president again and emerge as her party’s candidate, though, it would all start right back up again. Here’s guessing she recognizes it, and is enjoying her current life all the more because of it.