The U.S. slaughters at will, then shields its actions from all forms of judicial and democratic accountability 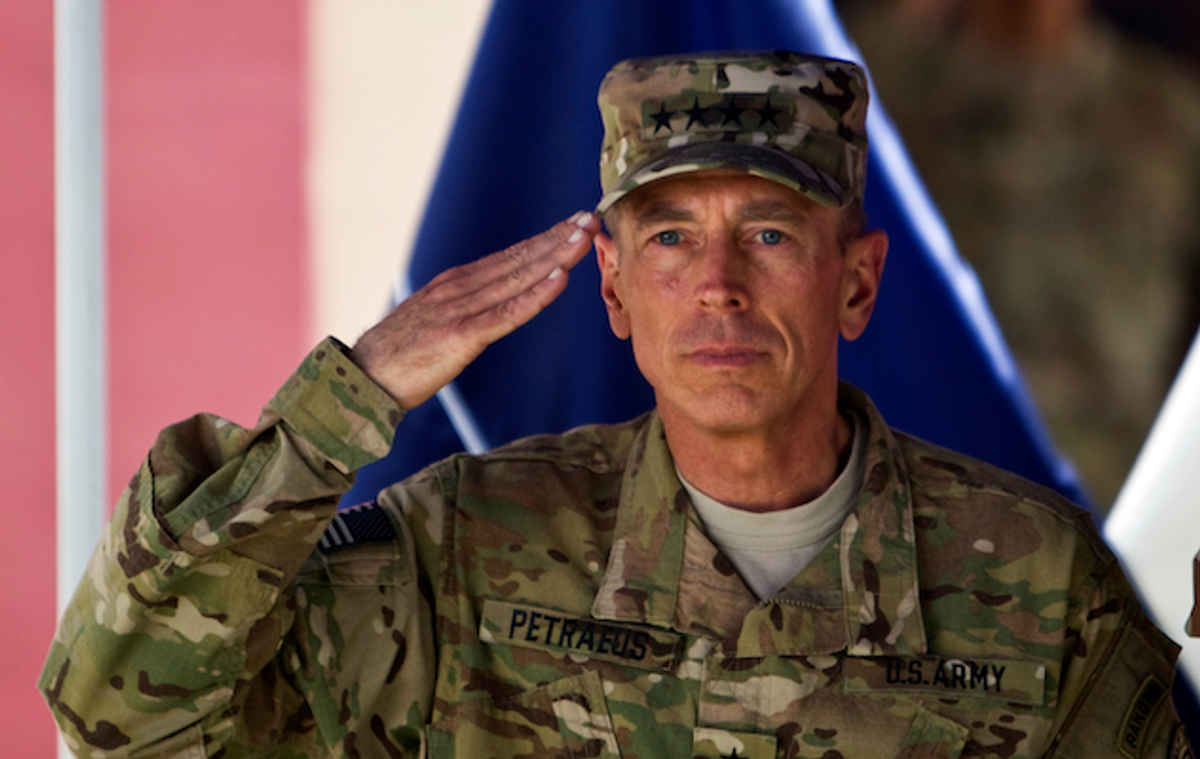 This headline and first paragraph from today's Washington Post scoop by Greg Miller speaks volumes about so many things:

There are many evils in the world, but extinguishing people's lives with targeted, extra-judicial killings, when you don't even know their names, based on "patterns" of behavior judged from thousands of miles away, definitely ranks high on the list. Although the Obama White House has not approved of this request from CIA Director David Petraeus, these so-called "signature strikes" that "allow the agency to hit targets based solely on intelligence indicating patterns of suspicious behavior" are already robustly used in Pakistan -- having been started by George Bush in 2008 and aggressively escalated by Barack Obama. There is much to say on this new report, but in order for me to focus on three discrete points, permit me to highly recommend two superb articles that highlight other vital aspects of this policy: (1) this article from my Salon colleague Jefferson Morley this morning on why this form of drone-targeting is pure American Terrorism, and (2) this essay from Chris Floyd about a recently published Rolling Stone article by Michael Hastings on Obama's love of drones and secret wars and how the military's slang for drone victims -- "bug splat" -- reflects the sociopathic mindset that drive them.

Initially, it's critical to note how removed all of these questions are from democratic debate or accountability, thanks to the Obama administration's insistence that even the basic question of whether the CIA has a drone program is too secret to permit it to publicly acknowledge, even though everyone knows it exists -- especially in the countries where it routinely kills people. Recall that Obama officials refused to tell the ACLU, in response to a FOIA request, whether any documents relating to a CIA drone program even exist because even that is too much of a secret to address, and when the ACLU then sued the Obama administration -- seeking the most basic information about why the Obama administration thinks it has the power to kill people this way and how it decides who will die -- the Obama DOJ again insisted in court that it cannot even acknowledge that such a program exists, let alone provide any basic disclosure or transparency about it.

So here we have this incredibly consequential policy adopted in total secrecy by the Obama administration, one that empowers the President to secretly target people, including American citizens, for instant, due-process-free death. They have placed the policy beyond the rule of law -- by insisting that it's too secret for courts to examine -- and shielded it completely from democratic debate. The only time we are permitted even to hear about it is when the President, his aides and loyalists politically exploit the corpses they create by strutting around with chest-beating, tough-guy boasting about how Strong it shows Obama to be (because, really, what is more courageous, more embodying of the noble American warrior spirit, than killing people by remote-controlled video game while the killers are ensconced in secure bunkers in the U.S.?).

And the only time we are permitted glimpses of the debate over these policies is when someone decides to leak it anonymously to reporters like Greg Miller. So here's a policy -- CIA drone strikes -- which anonymous administration officials are defending yet again on the front page of The Washington Post at the very same time the Obama DOJ tells courts that it cannot explain itself in a judicial proceeding because it cannot even safely confirm that such a program exists. Earlier this week, Hillary Clinton spoke at an "Open Government" conference in Brazil, and -- while serving in an administration that is waging an unprecedented war on whistleblowers and is fixated with self-mocking levels of secrecy -- had the audacity to say things like this, apparently with a straight face:

In the 21st century, the United States is convinced that one of the most significant divisions among nations will not be north/south, east/west, religious, or any other category so much as whether they are open or closed societies. We believe that countries with open governments, open economies, and open societies will increasingly flourish. They will become more prosperous, healthier, more secure, and more peaceful. . . .

I know we don’t need to make the case for openness to you. You’re here. But what we have to do is make a convincing case that those of us who have joined up to the Open Government Partnership really mean what we say. It’s not enough to assert that we are committed to openness. We have to deliver on the commitments that we have made.

Let me mention a few examples of how that is already occurring. . . .  I want to commend the Slovak Republic and Montenegro for also introducing whistle-blowing protection laws to ensure that those who expose corruption are not punished or harmed. . . .

These initiatives are designed to reduce corruption because we know corruption kills a country’s potential. It drains resources. It protects dishonest leaders. It takes away people’s drive to improve themselves or their communities. So the cure for corruption is openness, and by belonging to the Open Government Partnership, every country here is sending a message to their own people that we will stand for openness. And we’re going to hold ourselves accountable. . .

So we now have a chance to set a new global standard for good governance and to strengthen a global ethos of transparency and accountability. . . .[W]e intend to do all we can to help make the Open Government Partnership a leader in ensuring that the 21st century is an era of openness, transparency, accountability, freedom, democracy, and results for people everywhere. Thank you. (Applause.)

Last week, the Obama administration indicted its 7th whistleblower on charges of espionage -- more than double the number of such cases under all prior Presidents combined -- and it continues to insist that its CIA drone program is too secret even to acknowledge for purposes of court cases or public debate, even as it boasts of that same program on the front pages of newspapers. That's apparently what Clinton means when she trumpets the "global ethos of accountability and transparency."

Secondly, one can never emphasize enough how the U.S., through the policies undertaken in the name of the Terorrist Threat, is principally responsible for sustaining and continuously increasing that threat. In February, Jeremy Schaill returned from Yemen and documented how U.S. drone attacks are the primary source of Al Qaeda's strength in that country. In March, David Rohde -- the former New York Times reporter who was kidnapped and held in Pakistan by the Taliban for seven months -- documented how Obama's "signature strikes" in Pakistan are also "backfiring":

From Pakistan to Yemen to post-American Iraq, drones often spark deep resentment where they operate. When they do attack, they kill as brutally as any weapon of war. The administration’s practice of classifying the strikes as secret only exacerbates local anger and suspicion. Under Obama, drone strikes have become too frequent, too unilateral, and too much associated with the heavy-handed use of American power.

Rohde also noted: "after promising to make counterterrorism operations more transparent and rein in executive power, Obama has arguably done the opposite, maintaining secrecy and expanding presidential authority." Last night, in response to this Post article, Yemen expert Gregory Johnsen wrote: "At some point - as the bombs continues to fall - people are going to come to the conclusion that Yemen is under western military attack" and "signature strikes in Yemen could easily expand the war well beyond one the US could ever kill its way out of." He observed that "signature strikes" are likely to kill far more civilians since "in Yemen just because it has a beard, carries a gun, and talks about Islamic law doesn't mean its al-Qaeda" and then asked: "If US has been carrying out strikes in Yemen since Dec. 2009 then why does AQAP keep getting stronger?"

In late 2009, an Obama-approved attack with Tomahawk cruise missiles and cluster bombs killed dozens of innocent Yemenis, including 21 children. In May, 2010, a U.S. drone attack killed a popular Deputy Governor of a Yemeni province. In October of last year, two weeks after Obama successfully ordered the death of U.S. citizen Anwar Awlaki, a U.S. drone strike killed his 16-year-old son, Abdulrahman (today's Post article asserted, seemingly without any basis, that that killing was "inadvertent," even though the alleged target was apparently nowhere near the scene). It's not hard to imagine what ordinary Yemenis think of the U.S., and whether they'd be more sypmathetic to Al Qaeda's message after all of this.

So here we have -- yet again -- the U.S. doing more than anyone else could to increase the threat of Terrorism with the very policies it claims are necessary to combat Terrorism. It's impossible to know whether that outcome is a feature or a bug for U.S. policy makers, but what is certain is that the threat that continues to fuel impenetrable American secrecy, massive erosions of civil liberties, the proliferation of the Surveillance State, and the ongoing expansion of endless war and militarism, is the very same threat which the American National Security State -- as it well knows -- is primarily responsible for sustaining with its actions.

Finally, none of this will matter politically. That's because, as both Hastings and Floyd highlight, most Democrats are now fully on board with whatever policies of slaughter and secrecy Obama endorses. As Hastings put it:

A recent poll shows that most Democrats overwhelmingly support the drone program, and Congress passed a law in February that calls for the Federal Aviation Administration to "accelerate the integration of unmanned aerial systems" in the skies over America. Drones, which are already used to fight wildfires out West and keep an eye on the Mexican border, may soon be used to spy on U.S. citizens at home: Police in Miami and Houston have reportedly tested them for domestic use, and their counterparts in New York are also eager to deploy them.

Indeed, one Obama-loyal writer at a popular Democratic blog -- echoed by another -- recently explained that he has little interest "in civil liberties" and what he euphemistically called "a less bellicose foreign policy." That's because he instead "is primarily interested in the well-being of the American middle-class" -- not poor brown Muslims in Yemen whose children are being wiped out of existence by the Democratic Nobel Peace Prize winner whom he adores -- as well racism on U.S. soil (but not, obviously, outside of it). To the extent Democratic groups talk about any of these things at all, it is, disgustingly, to hail them as glorious "Obama foreign policy successes." Put another way, there is now about as much objection to these ongoing policies of rampant slaughter, secrecy and lawlessness in most Democratic and progressive venues as there was at The Weekly Standard and Fox News during the Bush years (though at least The Weekly Standard and Fox are consistent and intellectually honest about it: they supported these things under Bush and now do the same under Obama).

It's unclear whether Obama will approve Petraeus' request for the use of "signature strikes" in Yemen, so most Democrats will avoid taking a position until that happens (I still so fondly recall when Democratic partisans cheered Obama for transparency when he announced he'd disclose torture photos in the possession of the U.S., then cheered him again for Protecting Our Troops when, two weeks later, Obama reversed himself and said he would instead conceal the photos). But whatever else is true, the policies of rampant drone slaughter -- and the secrecy and radical executive power theories that shield them from legal and political scrutiny -- are well entrenched, now more so than ever.