Salon talks to the star of HBO's "Veep" about Nancy Pelosi, the joy of swearing and fans' endless "Seinfeld" quotes 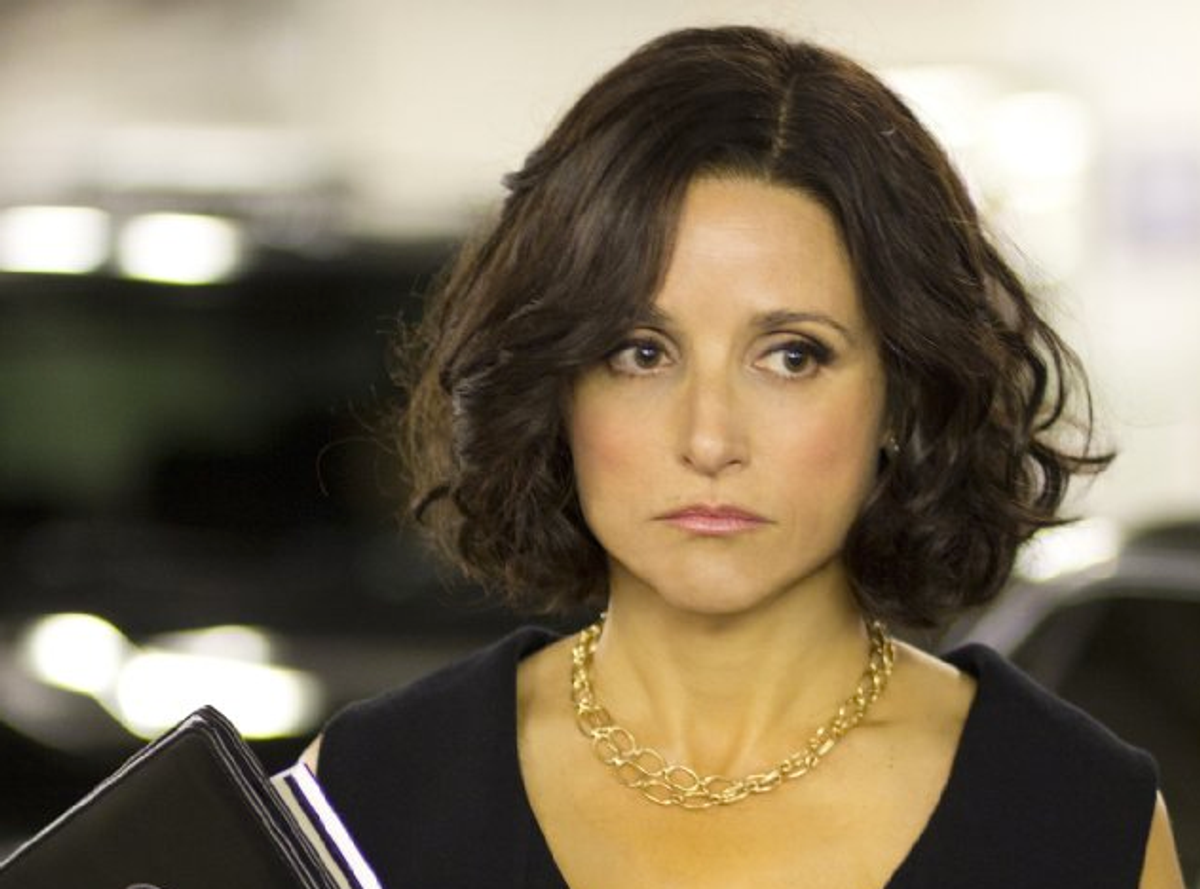 Julia Louis-Dreyfus in a scene from "Veep"
--

In HBO's new comedy "Veep" (which begins this Sunday night at 10 p.m. EDT), Julia Louis-Dreyfus plays Vice President Selina Meyer, a former Maryland senator now simultaneously at the center and outskirts of power. The fast-paced, curse-laden show has much the same feel as creator Armando Iannucci's previous work, which includes the behind-the-scenes British political satire "In the Thick of It." (Imagine the British version of "The Office" without the mockumentary aspect, politicians instead of paper salesmen and a million more F-bombs and you get pretty close to the "In the Thick of It" and "Veep's" aesthetic.)

"Veep" has a cynical take on politics — a world where everyone is just trying, often haplessly, to get through the latest crisis. But neither party is the brunt of the show's criticism. Meyer's party affiliation goes unnamed (even though Louis-Dreyfus is a public Democrat) as she works on not-so-partisan initiatives like Clean Jobs and filibuster reform. With "Veep," Louis-Dreyfus has her meatiest, and best, role since Elaine on "Seinfeld," and she spoke with Salon about the show, the fun of cursing and "Veep's" political prescience.

Our politics can be so ridiculous that, to a certain extent, if you put what really happens on screen, or some of the characters that really exist, it might play as unbelievable. Did you have to tamp down the absurdity at all, to make it plausible?

It's a question of, is art imitating life or is life imitating art? Our desire is, of course, to make this seem as authentic as possible, so that as a viewer you feel like you're seeing behind the curtain. There's a verité thing that we apply to story and performance. I think some things in politics are so broad that you couldn't put them in the show because then they'd be accused of being too broad. But it's interesting because in the second episode they go to the frozen yogurt store, and did you see what happened with Biden at the custard shop? And then there's all the corn starch stuff and Nancy Pelosi on the Hill, which, by the way, happened after we had shot our episode. [In "Veep's" pilot, Meyer also tries to introduce corn-starch utensils to Washington.]

Do you personally find politics laughable or stressful?

I get very anxious in debates. I get anxious seeing anybody squirm in public. Maybe because I identify with everybody.

And, also, they're acting.

Yeah, a lot of politics is acting. A lot. There's obviously more of a responsibility attached to the performance.

In the New Yorker profile of Armando Iannucci, he spoke about how HBO executives suggested, after seeing the pilot, that Selena needed to become more competent.

You'll get it as the season unfolds. You want to be able to see her manage successfully. And you will see that. I think Selena's a political animal; that works for her and it absolutely doesn't work for her. It gets in her way at the same time. But you'll see how it is that she's managed to stay alive in Washington so long as a viable politician. Although, incompetence is really fun to play, I will say that.

You guys did very long rehearsals before you even started shooting. How much improvising was going on then, and how much when you got on camera?

Tons. Like you wouldn't believe. Some of these scripts were quite written. A couple were partially written, just scenes. Then we would take the script that was there and launch off from it and go in that direction, or up here, or there. It was like the clay was there and we were sort of playing with it. So we did all that six weeks prior and then we were shooting. We would get two or three takes and then Armando would say [in a British accent], "You know, that was lovely, why don't we loosen it up a bit? Should we loosen it up a bit? Play with it?" And that's what we did. I mean, the show is written, so I want to make sure everyone understand that. But it's very -- I don't know if Robert Altman worked this way or not -- Altmanesque. It's the most interesting and fun for me to play. I like creating a world that seems very real. People talking over each other. Although at first it was hard for me, I like not holding for laughs.

At the beginning you would stop and wait for the laugh?

Well, I wouldn't stop but I would make what I thought was a slight beat, half of a beat, so that gives the audience a second to laugh. But that doesn't play in our show. It really doesn't. Those beats are gone because you don't take half a beat in the mind, really.

You must have people talk to you about "Seinfeld" every day.

Yeah, they do. It's my life. There's so many phrases and stuff that have sort of entered the jargon. "Not that there's anything wrong with that," or "yada yada yada." And people, without even realizing it, will say "yada yada yada" to me.

Was it fun to curse this much?

Do you have one nasty line that was your favorite?

Yeah. Are we allowed to curse in your publication? "He's bustin' my fucking lady balls."

What do you think about this flood of lady sitcoms that came on the air this year? Do you watch them? Do you think it's an important trend?

I think any time a lady succeeds it's very important. I'm in favor of it. I think the more often women are calling the shots or ruling the world, the world would be a better place. In comedy, in showbiz, in politics, whatever.

Had you seen "In the Loop" and "In the Thick of It" before you started working on "Veep"?

I had seen "In the Loop" before I met Armando, but I hadn't seen "In the Thick of It," or any of the Alan Partridge stuff.

Speaking of things that are really hard to watch ...

Excruciating. You have to kind of look away. It's very, I call it wince-y. It's very wince-y. Watching it just sort of reaffirmed what I already knew, thank Christ, because I had signed on to do "Veep," then I watched it and I was like, wow. This is the real deal.

It's treading a nice line between being scathing but not partisan.