He'll likely lose reelection. And in France's Sunday contest, the real winner could be a spoiler on the left 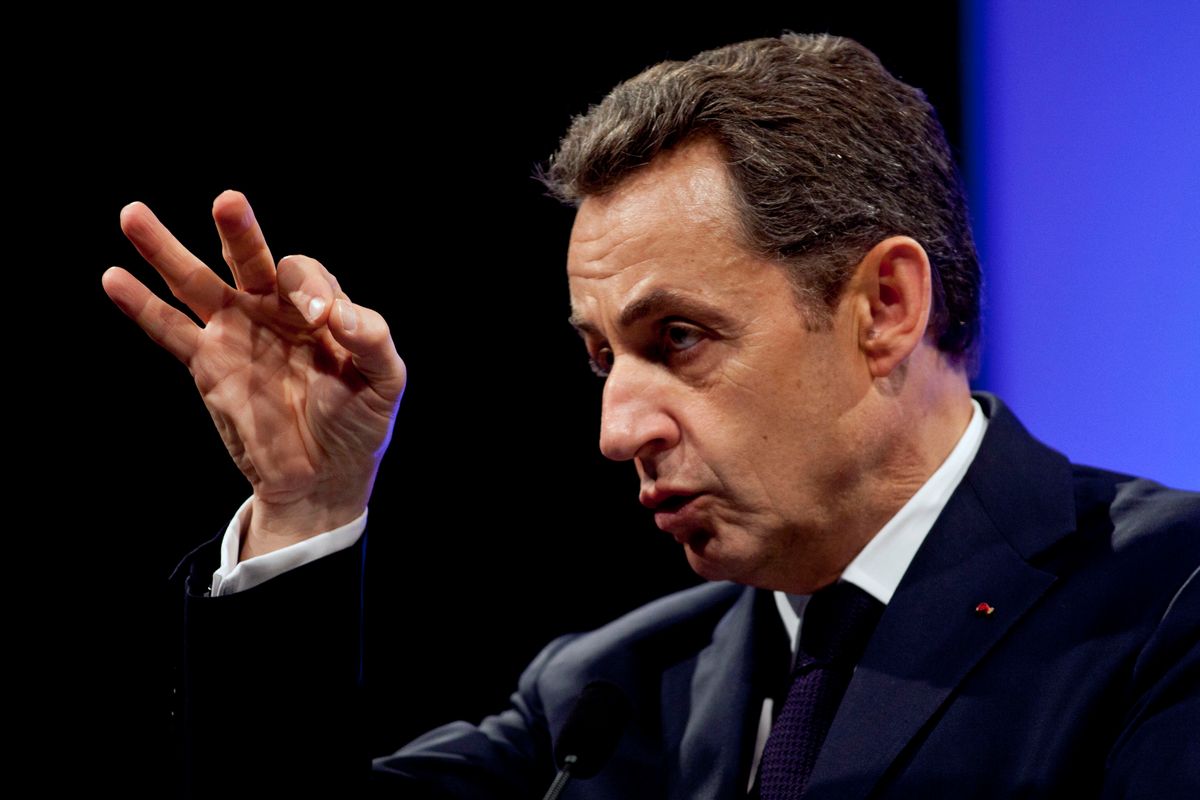 Nicolas Sarkozy gestures as he delivers a speech before building trade professionals as part of his campaign in Paris, April 17, 2012. ) (Reuters/POOL)
--

When French President Nicolas Sarkozy picked Place de la Concorde to stage his big Paris rally earlier this month, he was cloaking himself in the past conservative glories of Gen. Charles de Gaulle and Jacques Chirac. Even more, he was reliving his own victory parade in 2007, when “Sarko the American” promised to completely reform the French economy. But, as state-owned France 24 reminded its English-speaking viewers, the historic site was also where the original French revolutionaries brought King Louis XVI and Queen Marie Antoinette to the guillotine in 1793. Ah, yes, let them eat cake.

Sarkozy will begin to discover how his own fate compares when French voters cast their ballots Sunday, on April 22. His prospects look dire. Former President Chirac, whom he served as finance and interior minister, and many of Chirac’s family have told friends that they will vote for the center-left Socialist Francois Hollande, while mid-week polls show Sarkozy and Hollande in a dead heat at 27 percent each, far short of the majority either would need to win. The second-round runoff comes two weeks later, on May 6, and the polls predict that Hollande will win by as much as 12 percentage points. This would make Sarkozy the eighth European leader to fall from power since 2010. Hard times take their toll.

A decent enough apparatchik, Hollande headed the Socialist Party for many years, but never held high public office. He won his party’s nomination only after then IMF chief Dominique Strauss-Kahn found himself sucked into a New York City rape trial, and his campaign has generated little enthusiasm, especially among the young. As Hollande himself admitted, he has met far more people who want Sarkozy out than want him in. Should he win, which almost everyone including Sarkozy seems to expect, Hollande will owe his victory largely to Sarko-fatigue. Much of the country has grown tired of the flashy President Bling-Bling, with all his billionaire and show-business friends, and fed up with his running around like a hyper-active 3-year-old forever screaming “look at me.” Hollande, by contrast, has presented himself as calm, collected and more traditionally “presidential.”

Hollande’s program offers less of a contrast. Playing to widespread populist anger, he has promised to tax incomes over 1 million euros a year at a 75 percent rate, to consider higher taxes on luxury goods and a higher minimum wage and to return the age at which workers can retire and qualify for pensions to 60, provided they have worked and paid into the system for more than 40 years. He has also promised, at least rhetorically, to wage war on finance. But, like Sarkozy, he has emphasized the need for spending cuts, debt reduction and more austerity even in the face of a sluggish economic recovery in France and most of Europe. Kinder and gentler, he promises to balance the national budget by 2017, where Sarkozy promises to make the needed cuts by 2016. Either way, the drastic belt-tightening seems certain to slow economic growth even more, destroy jobs and further weaken the country’s hard-won social safety net.

In other words, more of the same bitter medicine that Dr. Sarkozy has prescribed, with a new face, a lot less frenzy and a few stabs at the rich. No wonder Hollande has failed to stir up much excitement. But one lesser candidate has, a former Socialist minister named Jean-Luc Mélenchon, a Trotskyist in his post-1968 youth who is running with the support of the Communist Party under the banner of the Left Front. Socialist Party supporters earlier dismissed Mélenchon as a Nader-like spoiler who could take enough votes from Hollande to allow the ultra-right National Front to slip into the second-round runoff, as they did in the presidential election of 2002. But the fiery Mélenchon has roused large enthusiastic rallies and surged to 15 percent in the polls. He could even take third place away from the National Front’s Marine Le Pen.

Third place? As many American voters might ask, so what? The answer is what makes French politics so different from our own and so fascinating to foreign observers. Candidate Hollande will want Mélenchon's backing to guarantee victory in the second round, and the price he will have to pay could well change the way President Hollande will have to rule.

Mélenchon's program is classic old French Left with a large dose of Keynesian economics and a lot more populist fire. He wants, quite rightly in our opinion, to seriously regulate the financial sector and to stimulate economic growth rather than impose more austerity. He also wants to withdraw from NATO. And, far more counterproductive in the current crisis, he wants to tax all income over 360,000 euros a year at 100 percent, raise the minimum wage by 20 percent, greatly increase the coverage of France’s celebrated healthcare system and renationalize certain industries.

If much of this sound hauntingly familiar, the last Socialist to win the presidency, Francois Mitterrand, similarly tried in the early 1980s to create Keynesianism in one country, and no one can deny that he failed miserably. The rich went on strike, taking their money out of the country, and Mitterrand famously reversed course without a fight. In place of attacking neoliberal economics, he led the way in turning the Common Market into an even more big business-friendly European Union. He also led in creating the ill-fated euro, which has exacerbated so many of Europe’s current economic problems, as American economists predicted it would.

But Mélenchon is no Mitterrand. He broke with the Socialist Party to oppose the treaty for a new EU constitution, and helped ensure its defeat in the French referendum of 2005. And where the elitist Mitterrand never mobilized his followers after he used them to win the presidency, the populist Mélenchon seems almost certain to take to the streets even after he loses. The test will be the May Day celebrations, which fall conveniently before the runoff. Expect to see an army of clenched fists, red flags and spirited singing of the Internationale, even as Mélenchon urges his supporters not to abstain, but to vote in overwhelming numbers for the soft and squishy Francois Hollande.

What will Mélenchon and his supporters get in return? He has already said that he would not join Hollande’s government, as he wants to remain free to fight for what he believes. He could change his mind, but more likely would be an electoral arrangement with the Socialist Party that enables the Left Front to gain a significant number of seats in June’s parliamentary elections. For good or ill, this is where the Mélenchon movement could gain traction, so please stay tuned.

In the meantime, Sarkozy is already criticizing Hollande as a hostage of Mélenchon's, and has warned that a Socialist victory would set France on the path to becoming another Greece. Mélenchon is also looking at the Greek tragedy and dramatically compares Hollande to the Socialist Prime Minister George Papandreou, who tried to impose as much austerity as he could and was then forced to resign. Mélenchon calls France’s likely new president “Hollandreou.” It’s not nice, but it makes the point.