Where are the heroes?

Dislikable antiheroes have taken over the TV landscape. It would be nice to have someone to root for again 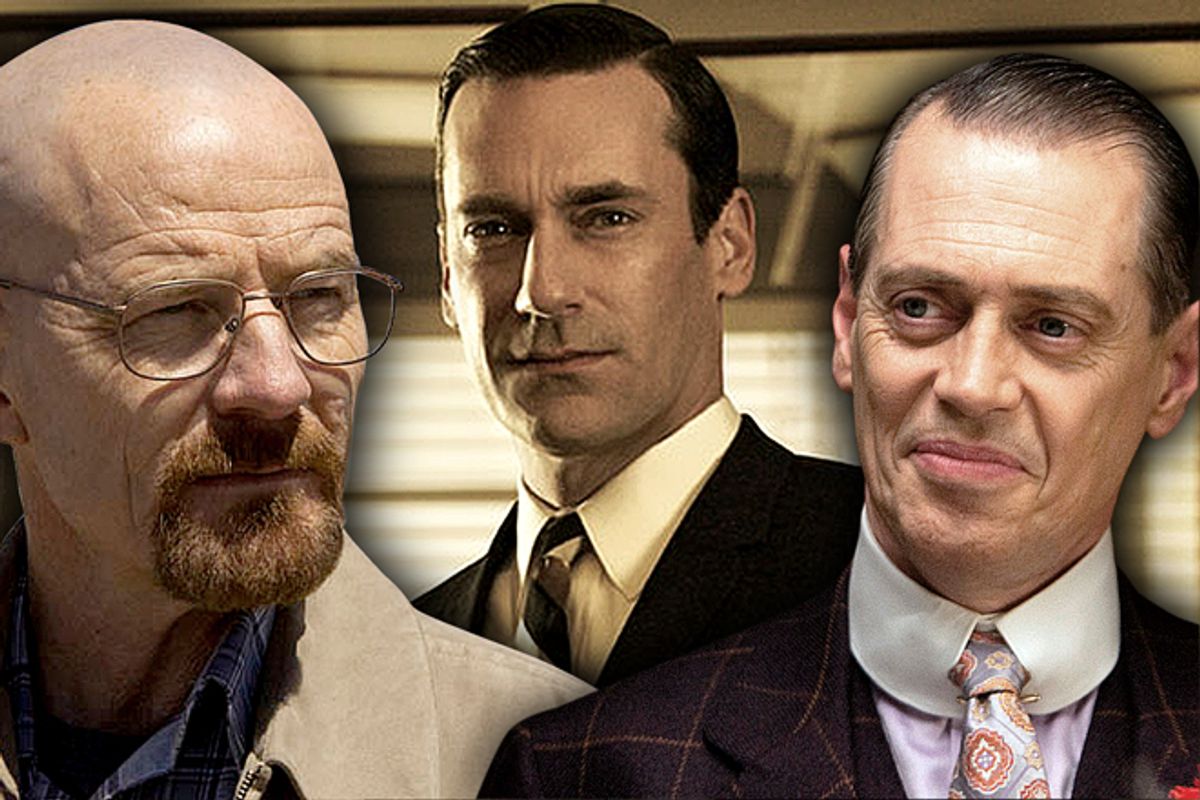 Last week, a strange thing happened on “Mad Men," stranger than Fat Betty, Roger’s marriage-ending acid trip, or even Don’s blindingly plaid dinner jacket: Don Draper lectured Pete on the sanctity of marriage. In the cab ride home from a business-slash-pleasure trip to a brothel, Don condescended to Pete, “Look, I am just trying to tell you because I am who I am and I’ve been where I’ve been that you don’t get another chance at what you have … If I’d met [Megan] first I’d have known not to throw it away.” Up to that point in the season, king cad Don Draper has been transformed into an adoring, puppyish married man, one who had nightmares about committing infidelity and swaggered while fixing busted sinks, not pleasuring other people’s wives. Before last night’s episode, and his wild display of bossy childishness, workplace dysfunction, and enforced sherbet eating, Don Draper was no longer quite an antihero. Of course it couldn’t last.

The antihero, the alluring, charismatic, sometimes sympathetic, but simultaneously immoral, selfish, unethical and often criminal protagonist, has long since taken over the television. Tony Soprano, Stringer Bell, Walter White, Don Draper and their kin comprise an omnipresent archetype found in the best shows on the air (“Breaking Bad,” “Mad Men,” “Homeland,” “Game of Thrones”), some of the most unimaginative shows on the air (Fauxpranos like “The Killing,” “Magic City,” “Hell on Wheels” and “Boardwalk Empire," series that have been conceived in “The Sopranos'” image, but lack all of its depth), and many of the dramas in between  (“Dexter,” “Sons of Anarchy,” “Revenge,” “Damages,” “House,” “The Borgias,” “Shameless,” “Boss,” "Weeds"). The preponderance of antiheroes and the masculine worlds they tend to inhabit is now so extensive that on Twitter a few weeks ago, when NPR’s Linda Holmes wondered, “Hypothetical: I want in on this 'golden age of TV drama.' I am not really into blood or macho power jostling. How many choices do I have?" the only answers seemed to be “Friday Night Lights,” "The Good Wife,” "Parenthood," “Downton Abbey” and “Justified,” which does take place in a world of macho power jostling, but at least features a hero who deserves the white hat he wears.

Consider the state of the antihero in the decade prior to 1999’s “The Sopranos.” When “Twin Peaks,” TV’s first audaciously auteurist series, premiered in 1990 it kicked off a decade of TV whose best shows revolved around more standard good guys, even if they were complex and conflicted ones. Think of “Peaks'” Zen-practicing, pie-eating FBI agent, the dedicated doctors of “ER,” the charming-irritating Ally McBeal, the idealistic civil servants of “The West Wing,” Mulder and Scully and their endless search for the truth and a diminutive but lethal vampire slayer named Buffy.

Then in 1999, “The Sopranos” arrived. “The Sopranos” had antecedents — from comic book vigilantes and the Dirty Harrys, Travis Bickles and Michael Corleones of 1970s cinema to “NYPD Blue’s” racist, alcoholic, butt-baring detective Andy Sipowicz and the convicts of HBO’s “Oz”— but it quickly out-influenced all that had come before it. With backup from 2002’s “The Wire” and “The Shield,” it all but annihilated the hero, give or take a few survivors on “Lost’s” Oceanic Flight 815 or “Six Feet Under's” the Fishers.

The first wave of antihero shows acted as a statement of purpose about television’s new, serious ambitions. If historically, TV had been a medium designed to sell you soap, to entertain and distract you, a vehicle for commercials, the antihero thoroughly upended that. If you watched Tony Soprano, Vince Mackey or any of the corner boys, cops or drug kings on "The Wire" like they were characters you had seen before, heroes in waiting, you were going to get sucker-punched and devastated over and over and over again. An antihero was an aggressive way to short-circuit viewers' expectations, to show them they were watching something brave and new. TV could be challenging, thorny, difficult, and there was no better way to convey this than through the challenging, difficult, thorny central character.

But we are well past the place where thinking people doubt TV’s artistic potential, and well into the territory where the antihero is a cliché. And yet he still flourishes, in shows both good and, increasingly, not so good, even as series like “The Good Wife” and its cynical worldview, or “Friday Night Lights” and its dazzling, wonderful Mr. and Mrs. Coach demonstrate, yet again, that the antihero is not necessary to ambitious television.

It’s against the backdrop of the oversaturated antihero market that the possibility, however brief, that Don might be maturing was so fascinating to me: Redemption is not a typical fate for an antihero, and here was Don, inching down that path. I had my fingers crossed that Don was making real progress, even as that meant ignoring all the ways he remained a jerk. (He may believe the self-deluding nonsense he said to Pete, but it was still nonsense, if only because Don never could have married a woman like Megan — confident, knowing — the first time around.) If Don was still unpleasant, at least he was a faithful while he was doing it.

As of last night’s episode, fidelity and bold speeches to Pete aren’t enough to cover up Don’s still glaring flaws. Even in love, Don commands Megan around like his favorite docile toy, remains uninterested in her wants and desires, abandons her when he gets mad, gets threateningly physical, and entirely ignores his professional responsibilities. Wishing this not to be so, wishing that Don Draper would cease to be an antihero just for variety's sake, would be to miss the tree for the forest, when Don makes for such stupendous, watchable, handsome, volatile and emotionally damaged tree. "Mad Men" is "Mad Men," and I feel lucky to watch it, antihero or otherwise. But I do hope the fact that "Mad Men" was still working during the brief calm of Don’s temporary personality makeover is taken as proof that there is no possible twist — not even the happy ending, or the nice guy — that a great show can’t pull off.

We’ve seen the antihero die and we’ve seen him stagnate; wouldn’t it be nice, every so often, to see him get better?