Manufacturers are targeting U.S. police forces for sales, as drones move from the Middle East to Main Street 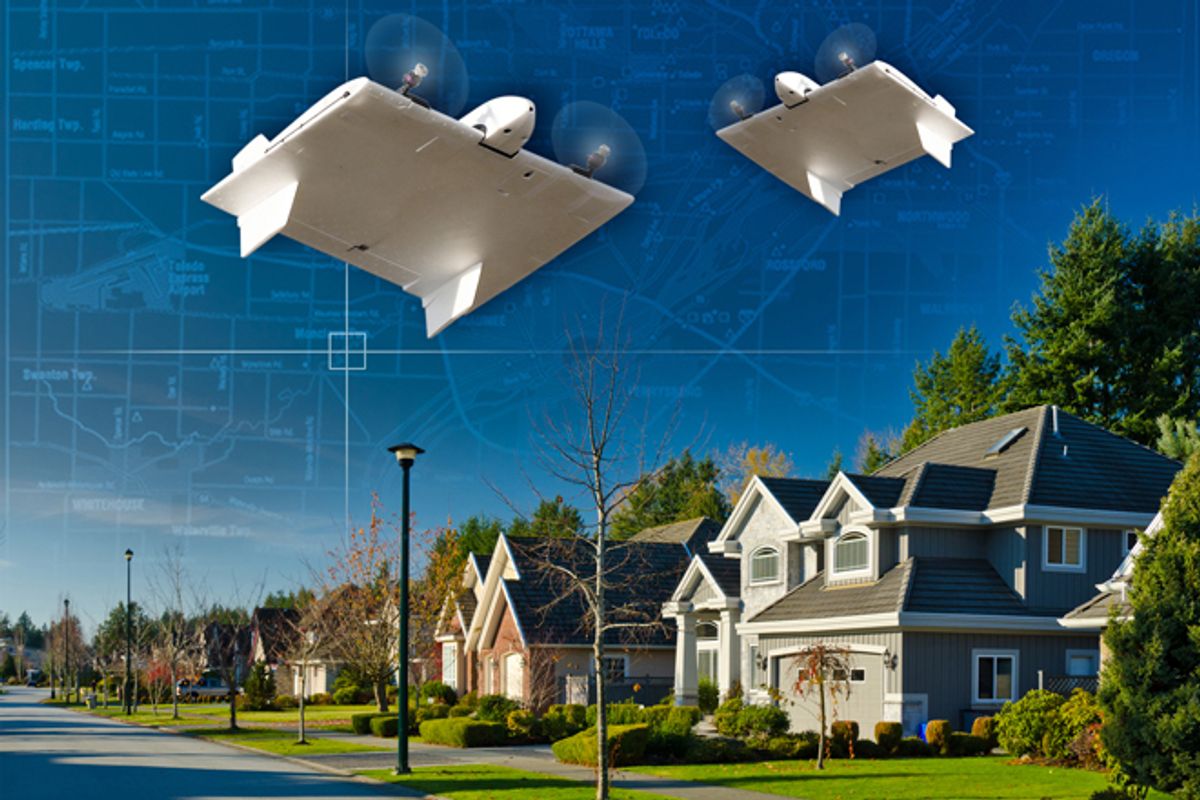 In November 2010, a police lieutenant from Parma, Ohio, asked Vanguard Defense Industries if the Texas-based drone manufacturer could mount a "grenade launcher and/or 12-gauge shotgun" on its ShadowHawk drone for U.S. law enforcement agencies. The answer was yes.

Last month, police officers from 10 public safety departments around the Washington, D.C., metropolitan area gathered at an airfield in southern Maryland to view a demonstration of a camera-equipped aerial drone -- first developed for military use -- that flies at speeds up to 20 knots or hovers for as long as an hour.

And in late March, South Korean police and military flew a Canadian-designed drone as part of "advance security preparations" for the Nuclear Security Summit in Seoul where protesters clashed with police.

In short, the business of marketing drones to law enforcement is booming. Now that Congress has ordered the Federal Aviation Administration to open up U.S. airspace to unmanned vehicles, the aerial surveillance technology first developed in the battle space of Iraq, Afghanistan and Pakistan is fueling a burgeoning market in North America. And even though they're moving from war zones to American markets, the language of combat and conflict remains an important part of their sales pitch -- a fact that ought to concern citizens worried about the privacy implications of domestic drones.

"As part of the push to increase uses of civilian drones," the Wall Street Journal reported last week, nearly 50 companies are developing some 150 different systems, ranging from miniature models to those with wingspans comparable to airliners." Law enforcement and public safety agencies are a prime target of this industry, which some predict will have $6 billion in U.S. sales by 2016.

Altogether, the drone industry's lobbying group, Association for Unmanned Vehicle Systems International, claims 507 corporate members in 55 countries. The industry proved its clout in February when Congress mandated the FAA open U.S. airspace to drones starting this year. According to the AUVSI's annual report, the group was responsible for the legislative language ordering the FAA to expedite the applications of qualified public safety agencies seeking to fly drones weighing less than 4.4 pounds this year. Larger drones will be eligible to fly in U.S. airspace by 2015.

Perhaps the most prominent firm in the U.S. drone market is Vanguard Defense Industries in Texas, which sold a $275,000 drone called the ShadowHawk to the Montgomery County Sheriff's Office in Texas last year. The company is run by CEO Michael Buscher, a 24-year veteran of U.S. Army Special Operations. In his LinkedIn profile, Buscher says that VDI offers technology "that will dramatically extend U.S. national security capabilities."

Uniquely among U.S. manufacturers, VDI touts its ability to weaponize drones for local police departments. "If you think weaponized unmanned aerial vehicles (UAVs) are still too new to combat zones for law enforcement to consider them for domestic use, think again," said the editors of Special Weapons for Military and Police in February:

The Kevlar fuel tank mounted beneath the ShadowHawk allows it to stay in the air long enough to provide complete surveillance of an area and engage suspects with buckshot, tear gas, grenades and less-lethal capabilities.

Vanguard has touted the weaponized ShadowHawk to police departments in Ohio and Illinois, according to emails published online by the hackers collective AntiSec. The group hacked the email account of Richard Garcia, a VDI vice president and a former FBI agent, with the stated goal of causing "embarrassment and disruption" to the company. (VDI says a group of British hackers arrested in England were responsible for the hacking. VDI did not respond to a request for comment.)

Israeli Aerospace Industries, which has an office in Arlington, Va., says its "Ghost" drone is "uniquely designed to support urban warfare ISR [Intelligence, Search, Reconnaissance] missions." A video touts the Ghost's ability to conduct day and nighttime operations silently. IAI did not respond to request for comment.

BlueBird Aero Systems, also based in Israel, boasts in a promotional video that it is "leveraging military UAS [unmanned aviation systems] know-how and innovative approaches to the military, homeland security and civilian markets." The company says its MicroB drone can be used for "urban environment monitoring for homeland security and law enforcement." The two-pound craft "can be autonomously launched within seconds even in a crowded urban environment, and provides up to one hour of real-time, enhanced visual intelligence of stringent situations."

Military expertise is part of the firms' pitch to homeland security and law enforcement customers. BlueBird says its leadership is "comprised of high-ranking military veterans as well as experts of the defense and security industries in both Israel and North America. " Aeronautics, another Israeli drone manufacturer, touts an advisory committee that includes a former chief of staff of the Israeli Defense Forces.

Major defense contractors are also beginning to move into the U.S. domestic market. Jeff Brody, a vice president of AAI, a Maryland-based division of Textron that supplies unmanned aviation systems to the Pentagon, says there is "pent-up demand and an insatiable desire" for the FAA to clarify the rules. While AAI has talked to law enforcement agencies about its products, Brody said the company needs to see new FAA regulations before it can modify war-zone drones for domestic use.

Other Pentagon contractors are already marketing to U.S. public safety agencies. Insitu, a Washington state-based subsidiary of Boeing, touts its  "Inceptor" drone as an all-weather instantaneous "eye in the sky" for U.S. police, fire and rescue workers. The Virginia-based Aurora Flight Sciences offers the Skate drone with three full-motion video cameras for police departments looking to conduct search and rescue operations and perform accident investigations. BAE Systems, another Pentagon contractor, says it has tested a small drone for civil use but a spokesman declined to answer questions about its other products for the domestic market.

With 56 domestic government agencies now authorized by the FAA to fly drones in U.S. airspace, law enforcement is leading the way in the adoption of unmanned vehicles. According to documents published last week by Electronic Frontier Foundation, 22 of the authorized agencies are primarily law enforcement departments, while another 24 entities (mainly universities) have law enforcement functions under them.

Among the domestic users are the Department of Homeland Security, which flies a fleet of nine drones over the country's northern and southern borders, and the FBI. A Bureau spokesman declined to comment on the nature and purpose of the FBI's drones saying that he could not discuss "investigative techniques."

While industry spokesmen say existing laws will adequately protect civil liberties and privacy, Congress held no hearings on the implications of domestic drones, and a wide range of opponents insist the drones pose a threat to privacy.

In Washington, activist groups Code Pink, Reprieve and the Center for Constitutional Rights are holding a "drone summit" this week, declaring it is "time to organize to end current abuses and to prevent the potentially widespread misuse both overseas and here at home."

The FAA "has the opportunity and the responsibility to ensure that the privacy of individuals is protected and that the public is fully informed about who is using drones in public airspace and why," said U.S. Reps. Ed Markey, D-Mass., and Joe Barton, R-Texas, in a letter to the FAA last week.

"My personal view is that complaints about privacy are overblown and unfounded," he said in a telephone interview. "Police departments want UAVs to increase awareness more quickly whether at a crime scene or a hostage situation. These guys want to see around a corner. They aren't peering in windows. We've never got a request to do that kind of stuff and we've had very extensive discussions with potential customers."

Ian McDonald, a vice president at Aeryon Labs, a Canadian unmanned vehicle firm, discounted concerns about the weaponization of drones. "That's not a request we've had from our customers," he said. Aeryon's customers, which include Canadian law enforcement agencies, "want a close-in aerial perspective and to remove officers or responders from danger."

But with a technology born in combat zones and marketed by defense contractors from countries that don't have baseline privacy laws (U.S.) or have poor human rights records justified in the name of "homeland security" (Israel), the American public may want more explicit guarantees that they will be the beneficiaries, not the target, of drones over America.