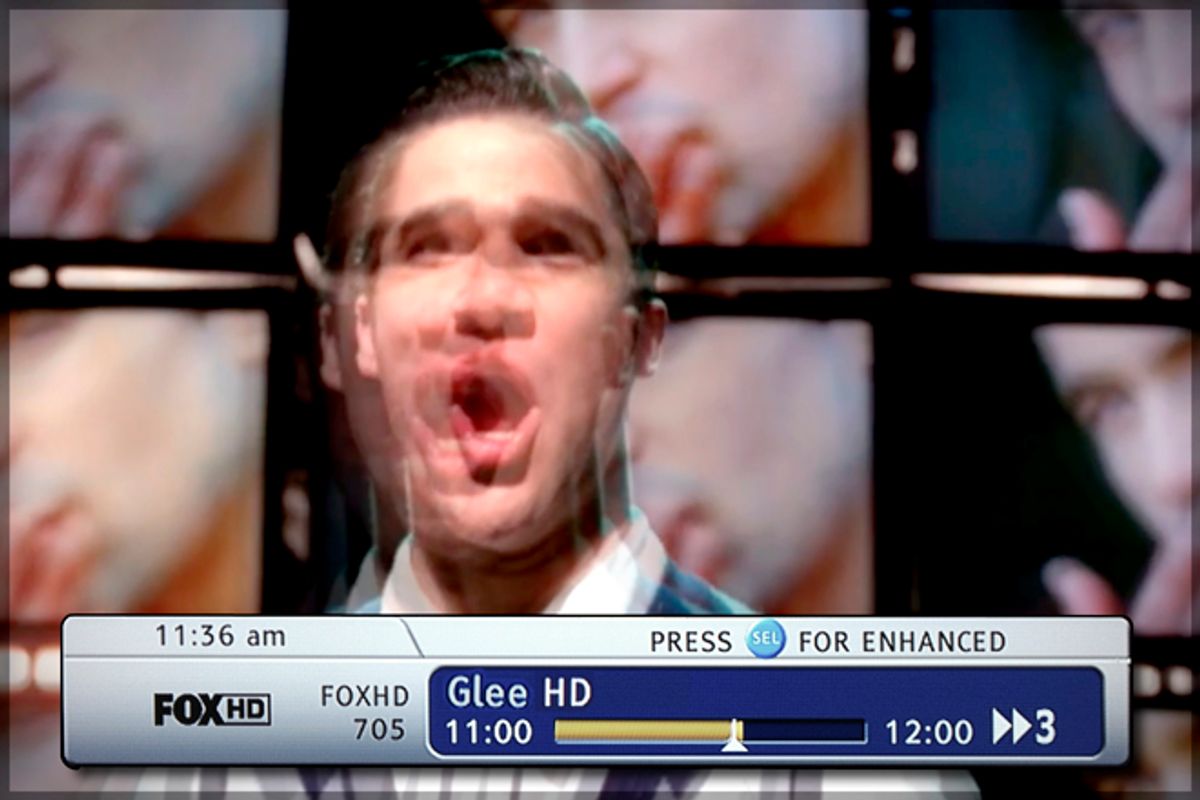 In the late '90s, when the name-brand precursor of the DVR, the TiVo, was being designed, its creators made sure that the machine’s fast-forward function worked at three speeds, but didn’t allow viewers to hop over a commercial break entirely, even though that was technologically feasible. This was intended as a sop to the networks, who were anxious about offending advertisers. Using the fast-forward button might allow the audience to zip through a McDonald's commercial, but at least people would still catch a glimpse of the McDonald's logo, vastly preferable to skipping over the golden arches altogether. Fifteen or so years later, skipping over commercials is the least of the things I do with my fast-forward button, which I have come to rely upon like a much loved security blanket, remix tool and timesaver, all wrapped in one essential battery-operated device.

Here are some of the joy-giving ways in which I flagrantly overuse the fast-forward utility on my remote control. I watch “Gossip Girl” in under 15 minutes, skipping every single scene that does not involve Blair Waldorf. I speed through most of the operating room scenes in “Grey’s Anatomy” and forensic lab setups in “Bones.” I’ve assembled a version of “The Killing” with narrative tension and solid pacing by ignoring all the dreary, dull, rainy scenes involving Mama Larsen and the tragically paralyzed mayor and watching only those involving Holder and Linden and the Larsen case. Recently, I turned on an episode of “Glee,” started fast-forwarding, expecting to stop on a musical number or a moment that looked not excruciating, and I ended up racing through the whole episode. (Yes, I went back and watched the whole thing, begrudgingly bound by a sense of professional obligation.) And I can't even tell you about the mauling that performance-based reality TV shows undergo, because there's too little left when I'm done.

When I asked some friends, colleagues and Twitter about fast-forwarding habits, a few were horrified by the idea. “What if you miss something important!” a friend asked (even though, when things get really boring, he checks his email. Another anti-fast-forwarder plays Words With Friends when TV gets slow). He has a point: I make sure never to fast-forward a show I haven’t seen before or anything that I’m reviewing, but it still feels like there is something inherently disrespectful (not to mention attention-deficit inducing) about speeding through a TV show, as there would if you were skipping 50 pages of a novel, or 20 minutes of a movie.

But skimming 250 pages of “50 Shades of Grey” (which I recently, unabashedly, did) is not the same thing as scanning 50 pages of “Moby-Dick.” Not all shows are created equal, and if zapping the dull bits of “Mad Men” (it’s getting hard to remember, but prior to this bonkers season, dull bits happened with some frequency) seems like a crime against art, zapping the repetitive parts of the “Idol” results show seems like common sense, not to mention a favor to your brain. As Time TV critic James Poniewozik put it on Twitter, “If it takes you more than 5 minutes to watch an “American Idol” elimination episode, you're doing it wrong.”

Fast-forwarding may seem like it represents the opposite impulse of the currently popular, very reverent completist school of TV watching, wherein viewers are so respectful of series and their developing dynamics that they feel guilty about starting “Justified” from the beginning of Season 2, skipping an episode of “Community,” or abandoning the second, murderous season of “Friday Night Lights,” but it’s just the flip side.  There may be some viewers who fast-forward through, say, the Skyler story line in “Breaking Bad” (and that’s between them and their conscience), but the people I spoke with were far more likely to skip around inconsistent shows as a way to improve the viewing experience by solving a series’ pacing or character problems and eliding its weakest elements with the only tool they have on hand (besides anguished tweets and comment board cries, of course).

Two of the shows frequently name-checked to me as victims of the remote were “Glee” and “Smash,” series that yo-yo more wildly than the cheapest yo-yo on the market. Zooming past underdeveloped characters like Will Schuester or Debra Messing’s personality-less husband, Frank, to get to Rachel Berry or Ivy Lynn is a resourceful way of focusing on the good stuff and not obsessing on the bad, a way to exert control over a show that is way out of control. (And then there are the songs, which some people find too excruciating to watch, and are whole point for others: “I fast-forward 'Glee' through every song and whenever I get bored, so it takes about 15 minutes to watch, depending,” someone told me. Another said she skipped “all of 'Glee' except when they are singing a radio pop song.”)

Competitive reality shows like "Idol,” “The Voice,” “Dancing With the Stars” and “The Bachelor” — other common targets of a merciless shortening — even seem built with the knowledge that audiences will speed through parts of them: How could they repeat themselves so much and so brazenly otherwise? Just as serial dramas are now created with the knowledge that some viewers will watch them very closely, all at once, looking for continuity, and that soap operas move slowly and repeat themselves over and over again exactly because their original audience — mothers with chores — would often catch the show in bits and pieces and without a pause button, reality TV utilizes fast-forwarding, putting on a two-hour show with five minutes of content. (And speaking of things that get better with a remote: soap operas, which you can speed through in under 10 minutes.)

Fast-forwarding is cutthroat and impatient, but it is yet another way to turn TV from the passive, coach-potato fest that drives parents crazy, into a more engaged face-off between audience and show and, more explicitly, that show's creator. The version of “The Killing” that can be cobbled together with some judicious skipping foregrounds the series' best actors and solves its intractable pacing problems. It may not be what “Killing” creator Veena Sud intended — it’s better than that.