What is Marco Rubio running for?

In a foreign policy speech, the Florida senator serves up bipartisan veal, not Republican red meat 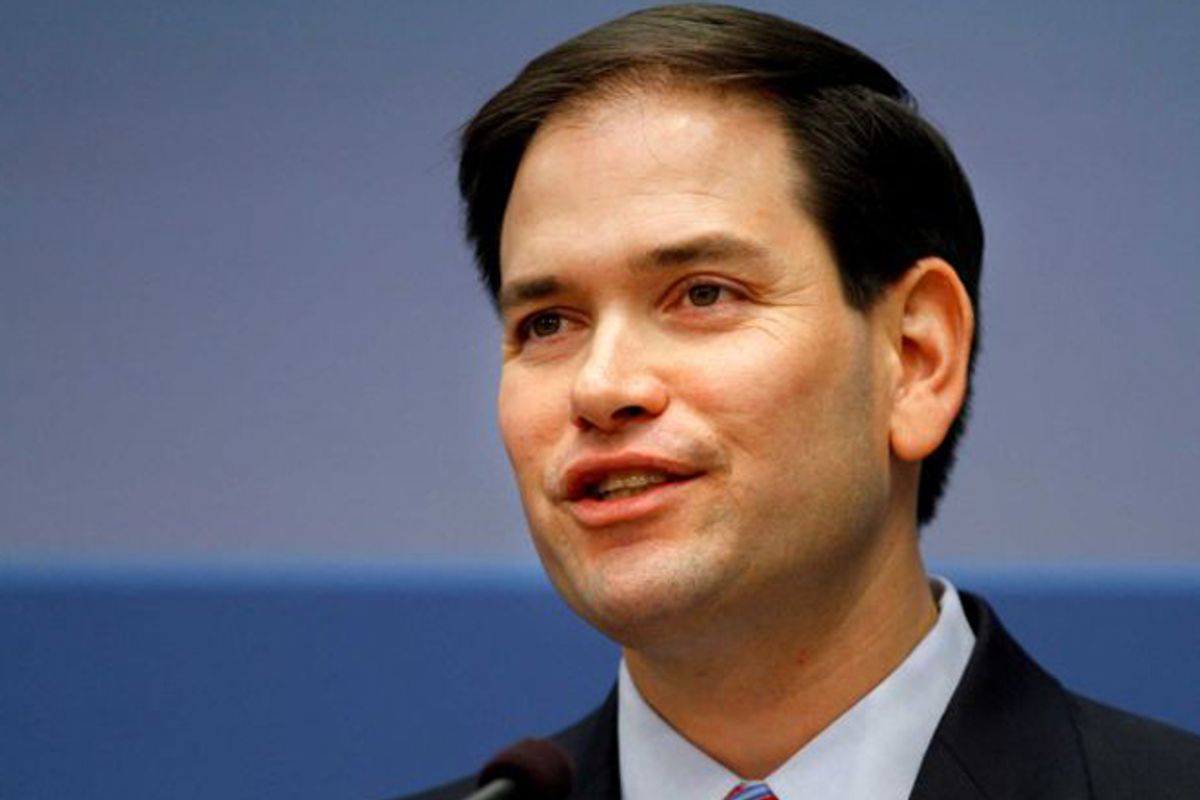 Marco Rubio insists he isn't running for vice president in 2012, but he is running pretty hard for something. The question is what and when.

The junior senator from Florida gave a proverbial "major foreign policy address" in Washington today, after publishing a Los Angeles Times op-ed calling for the U.S. to pay more attention to Latin America and before moving on to a meeting with Democratic senators about his variation of the Democrats' DREAM Act.

If nothing else, the events indicate Rubio is auditioning to become the new Richard Lugar: the Democrats' favorite Republican. His speech to an overflowing audience at the Brookings Institution was announced by an email from Martin Indyk, who served as assistant secretary of state under President Clinton and has positive things to say about President Obama. Rubio was first introduced by Strobe Talbott, deputy secretary of state under Clinton, and then introduced some more by independent Joe Lieberman, the former Democrat whose voting record is still more liberal than that of every senate Republican.

Rubio started out by tweaking Republicans who favor withdrawal from Afghanistan and oppose intervention in Libya. In his first year in the senate, Rubio said,

I found myself partnering with Democrats like Bob Menendez and Bob Casey on a more forceful foreign policy. In fact,  resolutions that I co-authored with Senator Casey condemning Assad and with Senator Menendez condemning fraudulent elections in Nicaragua were held up by Republicans. I recently joked that today, in the U.S. Senate, on foreign policy, if you go far enough to the right, you wind up on the left.

He repeatedly name-checked Brookings fellow Bob Kagan, author of the best-selling book "The World America Made," which President Obama has praised and which emphasizes the continuity of U.S. foreign policy between Democratic and Republican presidents. Rubio even had a kind word for the United Nations, an institution that he said was established "to spread peace and prosperity, not to assert narrow American interests."

His criticisms of Obama came with a bipartisan tinge. While acknowledging that the administration's emphasis on international coalitions was "correct," he chided Obama for lack of leadership.

And then he added, "This concept is neither novel nor partisan. President Clinton acted exactly in this way in Kosovo with the support of congressional leaders like Senator Lieberman."

It wasn't until he got around to talking about Iran that Rubio sounded a theme that might as easily have been heard during a Republican presidential primary debate, and even then he cast the idea in terms of caution and multilateralism, qualities not often heard in election-year GOP discourse:

We should also be preparing our allies, and the world, for the reality that unfortunately, if all else fails, preventing a nuclear Iran may require a military solution.

On Syria, he came close to calling for arming the opposition to President Bashar al-Assad, as John McCain, Joe Lieberman, and four other Republican senators have done. But with a single word, he took care not to commit himself to another war.

Forming and leading a coalition with Turkey and the Arab League nations to assist the opposition, by creating a safe haven and equipping the opposition with food, medicine, communications tools and potentially weapons [emphasis added]

His praise of former President George W. Bush was circumspect. He did not repeat his recent assertion that Bush did "a fantastic job." He did not repeat the dubious neoconservative talking point (some say "lie") that Bush's "freedom agenda" inspired the Arab Spring. Rather, he praised Bush for increasing funding for the fight against AIDS in Africa, a cause dear to some evangelicals but not to many others on the right. And he never once mentioned the de rigueur conservative trope of "American exceptionalism."

Rubio lost the last page of his speech — no teleprompter jokes, please -- but gracefully recovered by closing with a quote from Tony Blair, a Clintonian social democrat. Those expecting Republican red meat found themselves served with bipartisan veal.

Rubio's audience was Washington elites, not the Republican base. In conjunction with his independent stance on immigration, Rubio's speech veered so far from Republican orthodoxy circa 2012 as to almost disqualify him as Romney's running mate, at least in the eyes of a suspicious conservative base. Rubio has said that he doesn't want to be vice president and doesn't expect to be asked. The ambitions of his speech belied the former claim even as the details underscored the plausibility of the latter.

Rubio is positioning himself as a compassionate conservative and internationalist, a profile that will serve him well with the media. And his well-buffed bipartisan image will serve him even better if Romney loses.