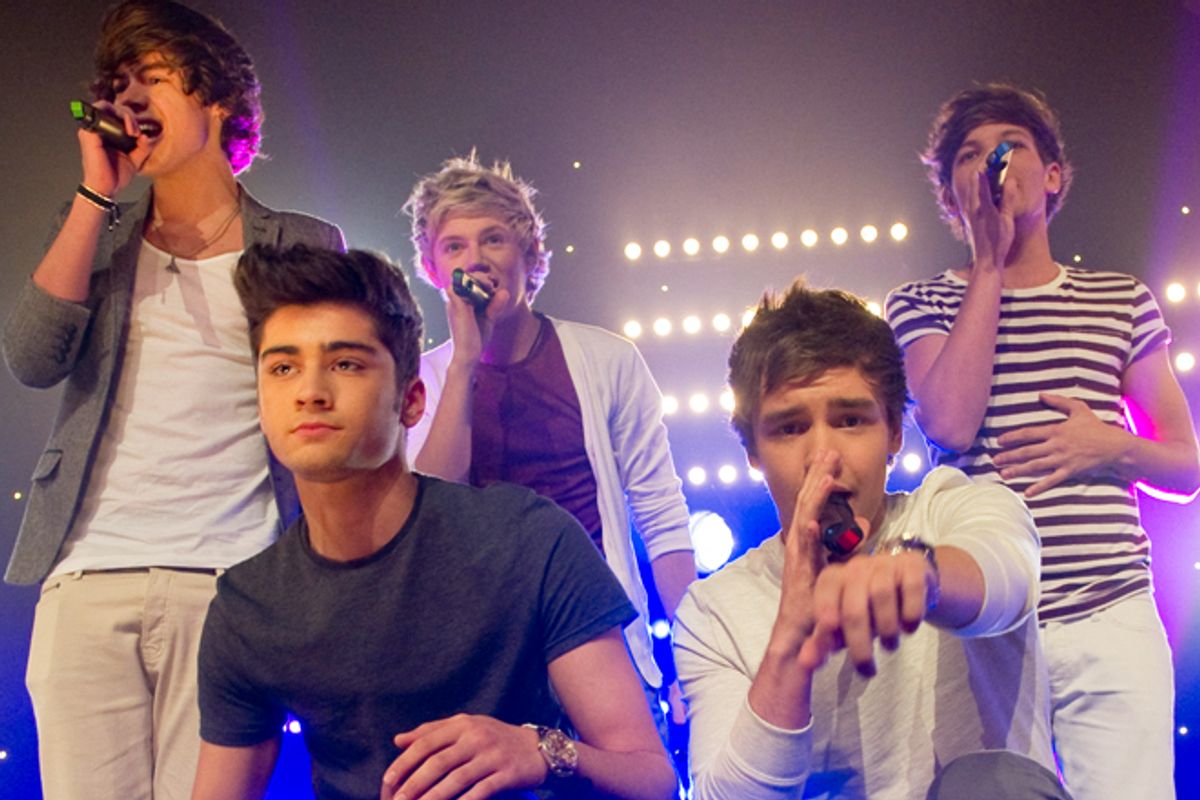 Like James Bond movies, fad diets and literary feuds, they are an ever-renewing part of the fabric of our pop culture lives. The hairstyles may change and the pant legs widen or retract, but the boy band -- just dreamy enough to send preteens shrieking through their orthodontia, but bland enough to make their just slightly older siblings groan about how much they suck -- will never die.

Yet not since the halcyon days of smooth harmonies and awkwardly choreographed moves known as the '90s has the boy band enjoyed quite a moment like this. There's U.K. import the Wanted. There are Nickelodeon stars Big Time Rush. There's even the classic do-they-or-do-they-not-qualify-as-a-boy-band boy band Hot Chelle Rae. And smiling nonthreateningly near the top of both the Billboard album and single charts, there is the inescapable, planet-dominating One Direction (who, it was announced this week, will soon be getting their own Hasbro dolls).

Aside from their requisite forward-blown Bieber hair, everything about One Direction has existed since boy band time immemorial. The inoffensively pleasant sound. The carefree beach-themed videos. The roster of four or five just-distinctive-enough guys to assure vehement lunchroom battles over who qualifies as the cute one. None of that's an accident. The boy band generally does not form organically in somebody's garage, born of the fire inside a handful of comrades to rock the hell out.

Sure, sometimes, the group may consist of classmates, like Philly's Boyz II Men, or siblings, like Hanson, the Jonas Brothers, the Osmonds, or the Jackson 5. But more often, the boy band is a calculated venture, designed expressly to capitalize on the nascent hormonal drives of young females. It originates when someone answers a casting call or forms a business plan. The Monkees began with an idea for a TV show about a Beatles-like quartet. Menudo managed to keep rolling for two decades thanks to an ever-changing roster of fresh boy meat brought in when the veterans aged out. The Backstreet Boys came together via a newspaper ad in Orlando, America's cradle of theme parks and make-believe. And One Direction formed when a bunch of U.K. "X Factor" competitors pooled their resources.

To be in a boy band is to enjoy a precarious kind of fame. The adulation and the sales success are usually as fleeting as the cusp of adolescence itself. Boys become men. Even Boyz II Men become men. Sometimes, those boys go on to become a Ricky Martin or Justin Timberlake, with a thriving, mature career. Sometimes, they coast for years on their youthful moment of fame, like Bobby Brown or Nick Lachey. And sometimes, they just wind up being that guy from Color Me Badd. Yet when you're armed with good looks, good hair and a few remedial moves, it must be a sweet ride for however long it lasts. Just this Thursday, Big Time Rush boastfully declared themselves the "Best Boy Band of All Time," a claim that the now-lurching-toward-middle-age 98 Degrees will have to challenge when they reunite for a tour this summer.

Someday, those sweet kids from One Direction, the ones whose "What Makes You Beautiful" homage to hair-flipping is currently pushing you to climb the walls faster than the song can climb the charts, will have thinning hair and beer guts. They'll do an oldies tour for their die-hard devotees. And by then, their older and settled former fans will understand why their moms still shout "That's my jam!" when New Edition comes on the radio, or their grandmothers cried the day Davy Jones died. It's because you never forget your first love. And for a lot of girls, it's clear who that person was. It was the cute one.