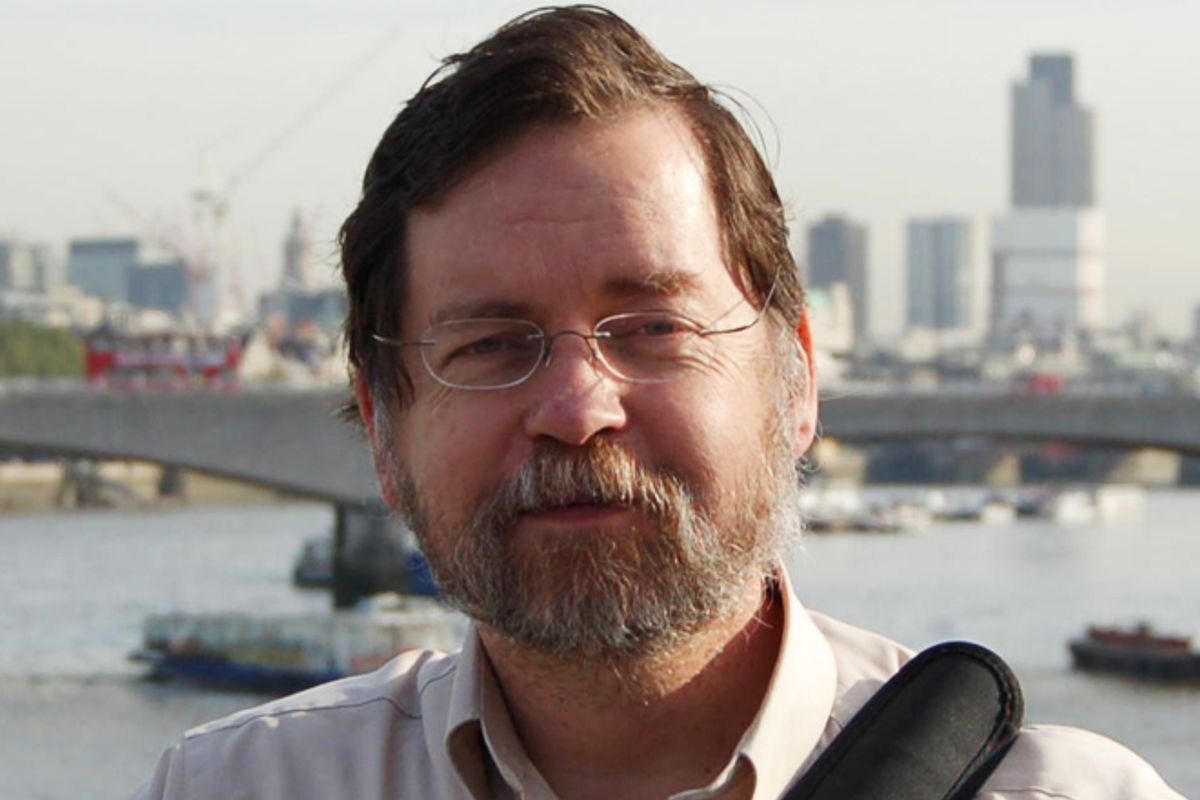 This originally appeared on PZ Myers' blog. It was written as a reaction to the recent excerpt from Mario Beauregard's "Brain Wars" (HarperOne), about near-death experiences, re-published on Salon. Beauregard's response to Myers will appear on the site this weekend.

Salon has had a redesign, which is fine; it seems to do this periodically just to confuse us. I’ll adjust to that, but what I don’t like is that the first thing I saw highlighted was an article so full of woo that for a moment I thought I’d stumbled onto the Huffington Post. We are now supposed to believe that science has explained near-death experiences (NDEs), and the answer is proof of life after death. It’s all nonsense; some editor somewhere needs to learn some critical thinking, because this article is filed under “neuroscience” when it ought to be in a category called “bullshit.”

The first clue that this is going to be bad is the author, Mario Beauregard. Beauregard was coauthor with Denyse O’Leary of one of the worst, that is, most incompetently written and idiotically conceived, books I’ve ever read, "The Spiritual Brain." It’s not just that he thought it sensible to team up with a well-known intelligent-design crank, but that the content is unreadable and the “science” is gobbledy-gook — Beauregard is a well-established kook, and here he is, writing for Salon.

NDEs are evidence of nothing but the creative power of the human mind. NDE proponents are constantly trotting out the same tired old anecdotes and the same tired old bogus misinterpretations, and this article is just more of the same. If you’ve ever looked into the NDE literature, you’ll know that two cases that are repeatedly brought up are the 20- to 30-year-old stories of Pam and Maria’s shoe; they have become something close to legend. These stories are poorly documented — “Maria,” for instance, can’t even be found in any hospital records, despite a story that details many medical details. Beauregard blithely recounts this anecdotal story as evidence that NDEs are real.

Maria was a migrant worker who had a severe heart attack while visiting friends in Seattle. She was rushed to Harborview Hospital and placed in the coronary care unit. A few days later, she had a cardiac arrest but was rapidly resuscitated. The following day, Clark visited her. Maria told Clark that during her cardiac arrest she was able to look down from the ceiling and watch the medical team at work on her body. At one point in this experience, said Maria, she found herself outside the hospital and spotted a tennis shoe on the ledge of the north side of the third floor of the building. She was able to provide several details regarding its appearance, including the observations that one of its laces was stuck underneath the heel and that the little toe area was worn. Maria wanted to know for sure whether she had “really” seen that shoe, and she begged Clark to try to locate it.

Quite skeptical, Clark went to the location described by Maria — and found the tennis shoe. From the window of her hospital room, the details that Maria had recounted could not be discerned. But upon retrieval of the shoe, Clark confirmed Maria’s observations. “The only way she could have had such a perspective,” said Clark, “was if she had been floating right outside and at very close range to the tennis shoe. I retrieved the shoe and brought it back to Maria; it was very concrete evidence for me.”

The case is touted as a clear example of veridical perception. “Veridical” is one of the favorite words of the NDE/OBE crowd; it simply means an observation that aligns with reality, so they’re always babbling about people wafting about in a ghostly disembodied state and seeing things that no earth-bound human could possibly have seen, which are later confirmed. Unfortunately, all we get are second- and third-hand accounts full of embellishments, and tall tales whose highlights are depressingly mundane, such as seeing a shoe on a ledge. It’s always trivia that gets reported. It seems that all dead people want to do is hover.

And, of course, Maria’s story has been totally demolished. The little details are all inflated; for instance, the claim that details of a shoe on a ledge could not possibly be discerned has been tested on that hospital building, and it turns out that a shoe on the ledge actually is really easy to see and jumps out to the eye of people passing beneath.

So, a few well-worn exaggerations are all these guys have to go on. I don’t think Beauregard can claim science has had any “shocking results” when this is the best he’s got.

Furthermore, Beauregard, who is supposed to be a neuroscientist, says some awesomely stupid things.

This case is particularly impressive given that during cardiac arrest, the flow of blood to the brain is interrupted. When this happens, the brain’s electrical activity (as measured with EEG) disappears after 10 to 20 seconds. In this state, a patient is deeply comatose. Because the brain structures mediating higher mental functions are severely impaired, such patients are expected to have no clear and lucid mental experiences that will be remembered. Nonetheless, studies conducted in the Netherlands, United Kingdom, and United States have revealed that approximately 15 percent of cardiac arrest survivors do report some recollection from the time when they were clinically dead. These studies indicate that consciousness, perceptions, thoughts, and feelings can be experienced during a period when the brain shows no measurable activity.

This is another common claim. The subject, they say, was flat-lined during the incident — the heart was still and there was no brain activity, and yet, they claim, the subject was experiencing detailed perceptual events during this period of material inactivity. What they gloss over is the simple fact that, while there was definitely a period when their brain was functionally inert, they are describing these events afterward, in a period when their brain is fully active. Beauregard is making the ignorant mistake of assuming that our consciousness is a continuous stream of recorded mental activity, and that a remembered event must necessarily have actually occurred.

That’s not how memories work. Our brains don’t tuck away a movie of our experiences somewhere in our temporal lobe; they store a few little details away, with a web of associations, and basically reconstruct the event when we try to recall it. This is why eyewitness testimony is unreliable — memory is dynamic and constantly being modified by later experience. When we lose conscious awareness and later recover it, the brain has absolutely no problem inventing a continuous narrative to fill in the blanks, and in fact, the way our minds work, we want that narrative. To consider that we didn’t exist for an interval of time is something we linear creatures tend to shy away from.

So when someone claims that a report of a recollection from a time when they were clinically dead is evidence of a mind functioning during that period when the brain was nonfunctional, you should know  they’re full of shit. It’s evidence of no such thing.

I also have to add that all of the accounts of NDEs and other such out-of-body experiences (OBEs) are peculiar in their attachment to ordinary patterns of perception. They claim to become a noncorporeal, immaterial, invisible entity that floats around, but somehow, they use the same mundane senses they do in the body. How do invisible eyes capture photons? How do immaterial minds detect physical vibrations in the air? Sensory transduction is a real problem for beings that lack hair cells and photoreceptors, I would think. It’s much more likely that they are using those fleshy sensory organs (or even more likely, the memory of using those organs), while experiencing an illusion of detachment from their body.

No reservations trouble Beauregard, though. He blindly charges on to claim revelation.

These findings strongly challenge the mainstream neuroscientific view that mind and consciousness result solely from brain activity. As we have seen, such a view fails to account for how NDErs can experience — while their hearts are stopped — vivid and complex thoughts and acquire veridical information about objects or events remote from their bodies.

NDE studies also suggest that after physical death, mind and consciousness may continue in a transcendent level of reality that normally is not accessible to our senses and awareness. Needless to say, this view is utterly incompatible with the belief of many materialists that the material world is the only reality.

As I’ve said, the recollection of vivid and complex thoughts while the heart is stopped is not only easily explained, it’s pretty much the default understanding by neuroscientists of how the brain works. The acquisition of veridical information would be more difficult to explain… if it had ever occurred. Trundling out the same hoary folk tales and anecdotes is not at all convincing that it has.

He is right that this idea of minds existing independently of brains is incompatible with materialist views. It’s also incompatible with the existing evidence, and he has presented no counter-evidence. His extremely badly argued article is yet another piece of evidence, though, that Beauregard is a crank.

P.S. It’s a shame that tripe got published in Salon, but don’t read the comments, or you’ll discover why it got published. There sure are a lot of mystically inclined, quantum-woo-spouting diddledingles fulminating away in their readership.