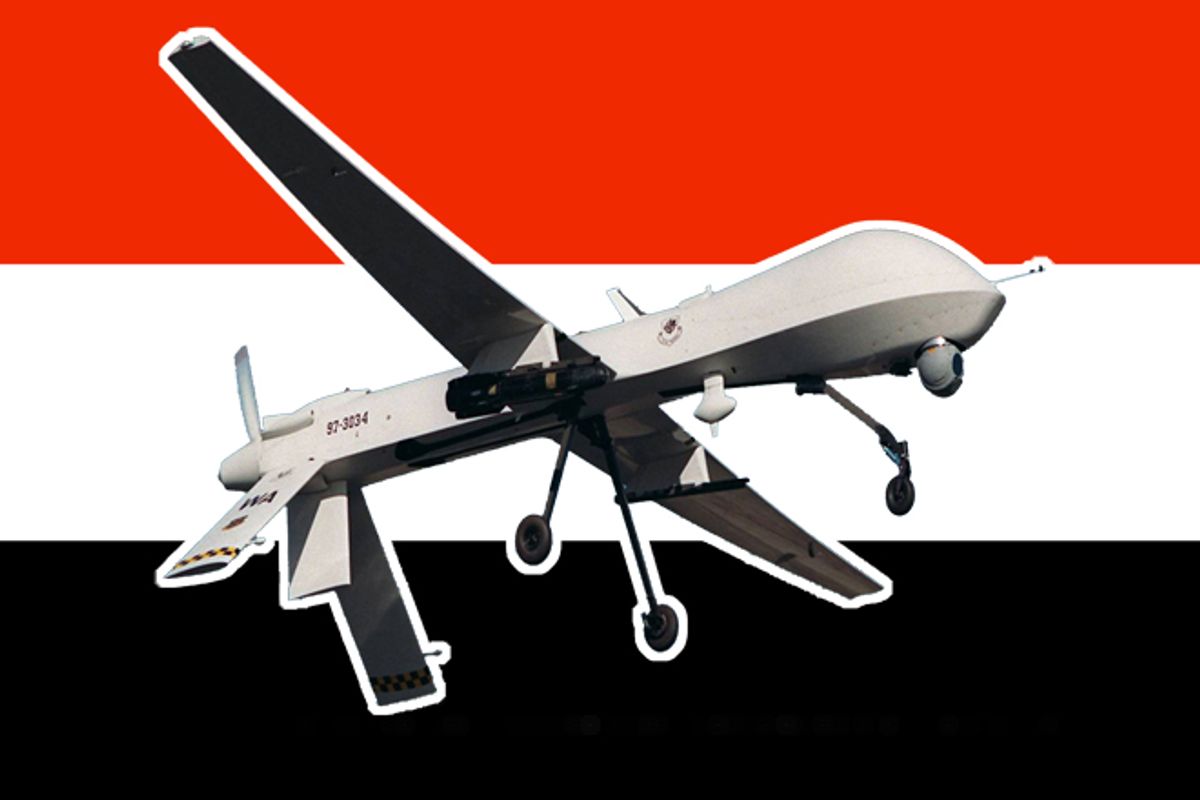 Ten days ago, I wrote about a request made by CIA Director David Petraeus to expand the drone war in Yemen in accordance with the following, as expressed by the first paragraph of The Washington Post article reporting it:

At the time, I wrote that "it's unclear whether Obama will approve Petraeus’ request for the use of 'signature strikes' in Yemen," though that was true only in the most technical sense. It was virtually impossible to imagine that a request from David Petraeus, of all people, to Barack Obama, of all people, for authority to target even more people in Yemen for death, now without even knowing who they are, would be anything but quickly and eagerly approved. And that is exactly what has now happened, as the Post's Greg Miller reports today:

The United States has begun launching drone strikes against suspected al-Qaeda operatives in Yemen under new authority approved by President Obama that allows the CIA and the military to fire even when the identity of those who could be killed is not known, U.S. officials said. . . .

The decision to give the CIA and the U.S. Joint Special Operations Command (JSOC) greater leeway is almost certain to escalate a drone campaign that has accelerated significantly this year, with at least nine strikes in under four months. The number is about equal to the sum of airstrikes all last year. . . .

Congressional officials have expressed concern that using signature strikes would raise the likelihood of killing militants who are not involved in plots against the United States, angering Yemeni tribes and potentially creating a new crop of al-Qaeda recruits. . .

Gregory Johnsen, a Yemen expert at Princeton University, has questioned . . . the wisdom of the expanded drone operations. . . . "I would argue that U.S. missile strike[s] are actually one of the major — not the only, but a major — factor in AQAP’s growing strength."

So here's yet another war that Obama is escalating, now ordering people's death with greater degrees of recklessness, now without even bothering to know who is being targeted. Although Miller doesn't bother to mention the likelihood of more deaths of innocent Yemenis, this is the same policy that has caused large numbers of civilian deaths in Pakistan (just read this heart-wrenching and amazing account of a 16-year-old Pakistani boy, Tariq Aziz, oh-so-coincidentally killed by an American drone, along with his 12-year-old cousin, just days after he attended a meeting to protest civilian deaths by drones). Anonymous officials claim that greater caution will be exercised in Yemen than in Pakistan, a claim Miller uncritically prints, but these types of nameless strikes are certain to kill far more civilians. Indeed, the oh-so-coincidental killing of Anwar Awlaki's 16-year-old American son in Yemen a mere two weeks after his father was killed proves how easily civilians were already being killed. The problem will only worsen now. As Johnsen pointed out, "in Yemen, just because it has a beard, carries a gun, and talks about Islamic law doesn't mean its al-Qaeda," but no matter: that's who will now be extinguished by Obama's drone campaign.

Beyond the moral aspect -- which Serious People do not comment upon, since it implies that the U.S. does not have the right to kill whomever it wants: only strategic objections are permitted -- it is crystal clear that, as usual, this aggression will only worsen the very problem it is ostensibly intended to solve. A Wall Street Journal article today quotes proponents of this policy as pointing out that "[Al Qaeda in the Arabian Peninsula] AQAP has grown stronger since one of its prominent leaders, American-born Muslim cleric Anwar al-Awlaki, was killed in a U.S. strike in September." No kidding: it's been the case for a full decade now, as the Pentagon well knows, that nothing strengthens Terrorism more than constant American aggression in that region. In February, Jeremy Schaill returned from Yemen and documented how U.S. drone attacks are the primary source of Al Qaeda’s strength in that country. As Johnsen put it last night, pointing to the Wall Street Journal article: "As AQAP continues to grow over the next year in Yemen remember this article and the US decision."

Then there's the question of what legal authority exists for Obama to order the targeting of Yemenis who very well may have nothing to do even with the "Al Qaeda" group in Yemen: one which itself did not even exist as of the time the 2001 AUMF was enacted. As Yale Professor Bruce Ackerman argued this weekend in The Washington Post, Obama, by approving of these strikes, is "breaking the legal barrier that Congress erected to prevent the White House from waging an endless war on terrorism." That's because Congress, even in the immediate aftermath of 9/11, refused to write the President a blank check to attack Terrorists of any kind. Instead, they authorized force only against those who perpetrated the 9/11 attacks and "require[d] the president to return to Congress, and the American people, for another round of express support for military campaigns against other terrorist threats." But as Obama demonstrated conclusively when he continued to wage the war in Libya even once Congress voted against its authorization, legal and Constitutional constraints are no more important to him than moral and strategic ones when it comes to waging more war.

As usual, to the extent that most Democrats mention any of this, it will be to celebrate its political value: how it proves that Obama is so very Tough and Strong on national security. Because nothing exudes Strength -- or the values of the Nobel Peace Prize -- like continuously escalating secret wars and targeting people for death via remote-controlled aircraft from thousands of miles away without even knowing their names. The innocent corpses, the trampling on accountability and transparency, the ongoing fueling of Endless War, must not be permitted to interfere with the President's re-election, so all of this is just best ignored, again. Dead Yemenis will be kept out of sight and out of mind, and on those rare occasions when we hear about them, we'll just tell ourselves that the President is a Good, Magnanimous Man who just wants to Keep us Safe.