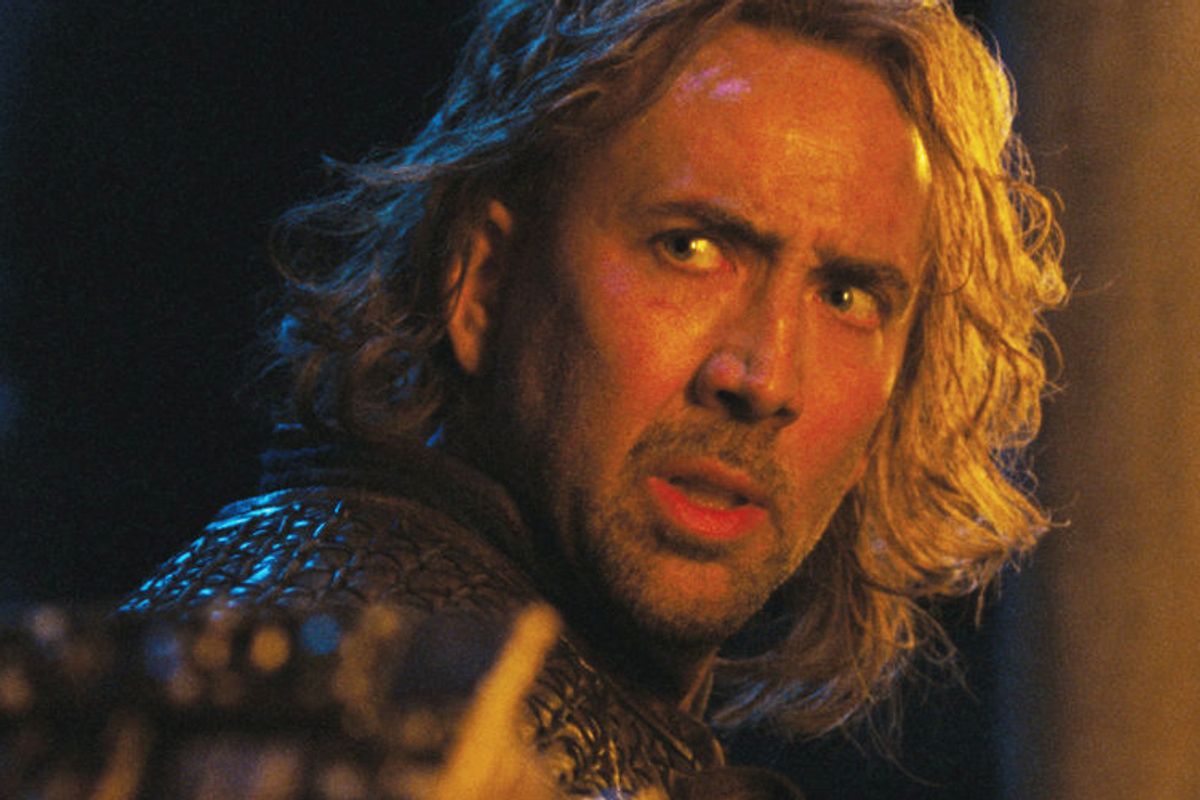 Nicolas Cage in "Season of the Witch"
--

So if I tell you that a medieval action-adventure starring Nicolas Cage, directed by the guy who made "Gone in Sixty Seconds" and released in January -- traditional burying ground of cinematic failure -- is kind of trashy and stupid, I'm guessing you're all, like, yawn. I mean, Cage, who seems compulsively unable to turn down a role, playing an overamped tough guy in a bad movie? Surely not! Now, if I add that the movie in question, which is called "Season of the Witch," resembles a Hollywood-by-way-of-Hungary remake of Ingmar Bergman's "The Seventh Seal" filtered through the B-movie aesthetic of, say, Roger Corman, then maybe I can get your attention for a couple of minutes.

It's a fair description as far as it goes, but that isn't nearly far enough. If anything, director Dominic Sena (best known, beyond directing Cage in "Sixty Seconds," for Janet Jackson and Sting videos) is way too focused on borrowing shots, scenes and situations from the Bergman classic, to no evident purpose, rather than delivering any actual entertainment. Off the top of my head, I'm guessing that "Season of the Witch" claims a place in the top five all-time bizarre and pointless homages to art cinema. (No. 1 on that list, now and for all time, has to be the 2001 slasher flick "Jason X," with its quotations from Tarkovsky's "Solaris.")

But there's no escaping the fact that Sena's got Nic Cage and Ron Perlman wearing "Monty Python and the Holy Grail" knight costumes, along with numerous fight sequences and a passel of evil witches and CGI demons, and utterly fails to make the movie any fun. Bragi Schut's screenplay can't decide whether to be idiotic or flat-out offensive and ultimately goes for both; if you believe that the big problem with the Middle Ages was that the Church didn't burn enough witches and heretics, then this is the movie for you. I briefly wondered whether the producers of "Season of the Witch" were going for the Christian audience, à la the "Chronicles of Narnia" series, but then I remembered that this is a Nicolas Cage movie made in Hungary, and therefore everything that sucks about it should be ascribed to befuddlement and institutional incompetence rather than strategy.

In case you think I'm kidding about the "Seventh Seal" thing: Cage plays a 14th-century knight returning from the Crusades along with his wiseass sidekick (Perlman), to find Europe overrun with the Black Plague. (Exactly the situation of Max von Sydow and Gunnar Björnstrand in the Bergman film.) Superstition and a preoccupation with supernatural evil have come along with the pestilence, and the returning Crusaders encounter flagellants in the streets, preachers inveighing against the devil and a beautiful young woman accused of witchcraft -- who never quite denies it -- chained up in a wooden cart. (All of that's in both movies.) En route to their ambiguous destiny, the travelers get lost in a mist-shrouded forest, where they are plagued by allegorical and possibly supernatural visions. (Ditto.)

But as Lucy once said to Linus after he explained a line of Shakespearean dialogue, "Now that I know that, what do I do?" Maybe Sena keeps ripping off a much better movie -- and, more to the point, a vastly different movie -- strictly for his own amusement, or to keep viewers like me awake. But it isn't doing him any good. In its better moments, "Season of the Witch" is an unremitting schlockfest, full of blood and filth, bloated, purulent corpses, ghastly one-eyed witches and undead monks. If there were more such Corman-esque thrills and chills, and a whole bunch less ponderous Bergman references, we'd all be better off.

Our disaffected Crusaders, Behmen (Cage) and Felson (Perlman), meet a dying cardinal covered with horrible sores (it's 88-year-old Christopher Lee, in a memorable cameo!) who commissions them to transport the sexy accused witch (Claire Foy) to a distant abbey. Supposedly a bunch of monks there who possess some Dan Brown-style super-secret exorcism manual will decide whether she's responsible for the plague. At first Behmen assumes she's not merely hot but also innocent, and that the intense young priest who "interrogated" her (Stephen Campbell Moore, more or less doing a young Nicolas Cage) is some kind of depraved religious sicko.

But oh no, my goodness no. As the chick-in-a-cage caravan proceeds across some admittedly spectacular Hungarian scenery toward the abbey, its members start to die off in predictable fashion -- Sena has no particular gift for either action or suspense -- while the witchy girl leers seductively at Behmen. Our final destination turns out to be a shoddy fight sequence involving some oddly effeminate computer-generated demons. There are a few guffaws in hearing Cage deliver thee-and-thou dialogue and in watching Perlman play yet another beefy fellow in a supposedly creepy yarn, but not nearly enough.

Especially when you consider that the semi-intriguing genre twist in "Season of the Witch" is to suggest that the medieval lunatics in the Vatican were right all along about murdering female herbalists by the thousands, and that the Black Death was the work of the Dark Lord and his lady minions. Germ theory, bah! That's totally Satanic commie propaganda. Next you'll be telling me that Barack Hussein Obama is an actual American. This isn't a movie for today's pussyfied Christians; it's a movie that should be teleported backward and shown in the multiplexes of the 14th century, when men were men and smelled like month-old haggis. Maybe that's not possible yet, but you know they're working on it.