Pick of the week: The astonishing documentary "Whores' Glory" explores the lives of sex workers around the world 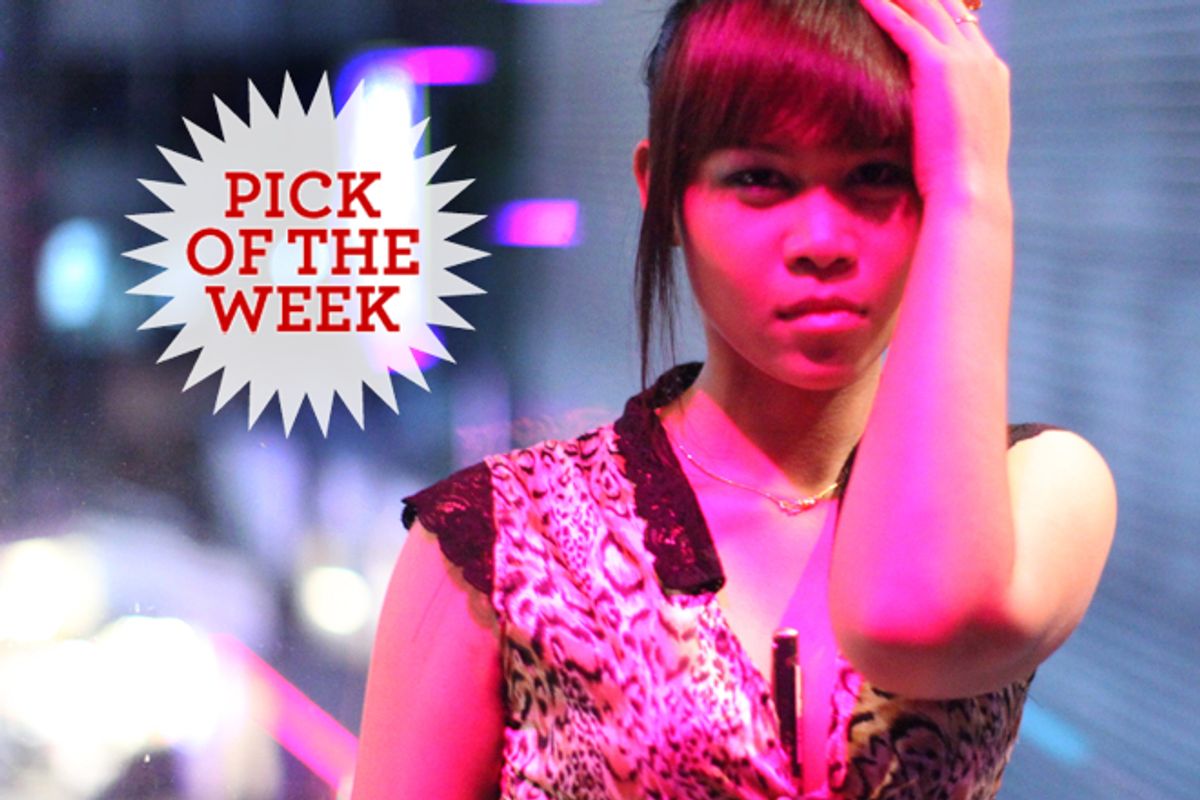 Prostitution isn't just the world's oldest profession. It's also a longtime focus of cultural obsession, across many historical periods and on every continent, from the poetry of Catullus to the woodblock prints of 19th-century Japan. There's such a long history of male artists, writers and filmmakers who depict prostitution in erotic, romantic and sentimental terms that it's only natural to approach Austrian documentarian Michael Glawogger's "Whores' Glory" with suspicion. Indeed, in the film's opening scene, Glawogger's camera directly engages the lurid allure of sex work, showing a group of scantily clad young women in a Bangkok brothel called the Fish Tank as they try to attract clients: Pretending to make out with each other, pressing their breasts and buttocks against the window, using a laser pointer to pick out likely-looking men on the street. But those are just the opening moments of a long journey, a daring, novelistic and unforgettable account of the real lives of female prostitutes in three very different countries and social contexts.

If "Whores' Glory" successfully resists romanticizing the lives of women who sell their bodies to make a living, Glawogger also does not surrender to what you might call the vulgar Marxist alternative, in which such women are interchangeable victims in a vast, mechanistic sexual economy, stripped of any agency or personality. Indeed, if there's an ideological point (and a smidgen of hopefulness) to be found in "Whores' Glory," it lies in the film's insistence that the women Glawogger meets in Thailand, Bangladesh and Mexico remain defiantly individual, even in the face of a system of sexual and economic exploitation they cannot (or at least do not) resist. Indeed, "Whores' Glory" has a surprising double focus on the women's economic lives and on their spiritual and religious pursuits. If one is inevitably reminded of Marx's famous remark that religion is the opiate of the masses, one might also remember that his preceding comments were not nearly so harsh: "Religious distress is at the same time the expression of real distress and the protest against real distress. Religion is the sigh of the oppressed creature, the heart of a heartless world, just as it is the spirit of a spiritless situation."

Right after that scene with the girls from the Fish Tank strutting over the Bangkok street, Glawogger introduces an extraordinary epigraph from Emily Dickinson, one that convinced me right away that this movie was something unusual. "God is indeed a jealous God," Dickinson wrote. "He cannot bear to see/ That we had rather not with Him/ But with each other play." Indeed, we have already seen brief vignettes of women in the three countries talking startlingly about their relationship to the divine. In Reynosa, a battered Mexican border city across the Rio Grande from McAllen, Texas, the street hookers all seem to pray to La Santissima Muerte (the Most Holy Death), a demonic female entity who seems to coexist with God and Jesus in their version of Roman Catholicism. In the City of Joy, a filthy warren of stone buildings in Faridpur, Bangladesh, a young woman tells the camera that she resists clients who demand oral sex by telling them that Allah did not make her mouth for that purpose; it is the mouth she uses to recite the suras of the Quran.

It's details like those that make "Whores' Glory" both a wrenching journalistic exploration of real life and something close to great cinema. This film, which took four years to complete, is the third installment in Glawogger's series of documentaries about work in the era of globalization, which began in 1998 with "Megacities" and continued with "Workingman's Death" in 2005. (I'm coming late to his work but what I've seen so far is absolutely remarkable -- and you can see it for yourself in a retrospective that just concluded in New York and will soon reach other cities.) While the fluid camerawork of Wolfgang Thaler is never ostentatious, this film has considerable artistic ambition, with a score by Pappik & Regener (members of the German band Element of Crime) and soundtrack songs by PJ Harvey, CocoRosie and other indie-type artists. I suppose some viewers will find those ingredients intrusive or distracting, but sometimes the music (and Monika Willi's remarkable editing) serve to create a little dreamlike distance from what we're seeing on-screen. Without that distance, "Whores' Glory" might be too difficult to sit through, quite frankly.

Compared with the dire conditions found in Faridpur and Reynosa, the women who work at the Fish Tank have almost middle-class lives. They live in modest but clean apartments, often have outside boyfriends, come to work by taxi, and punch in on a digital clock like industrial workers all over the world. On the other hand, the universal commodification of sexuality in Bangkok and the relentless capitalism of contemporary Asia seem to permeate almost every aspect of their lives. Perhaps it's surprising that many of them spend their leisure hours hanging out with "bar boys" -- coiffed and styled young men who work as prostitutes for an older female clientele -- but on the other hand, this is a world where no one believes in romantic love, and everything is for sale.

In Bangladesh, social and religious taboos mean that the prostitutes generally won't perform oral or anal sex (both of which are routinely available in Thailand). But the women of the City of Joy are virtual prisoners, often sold to madams after their first menstrual period and expected to live out their lives there, first as sex workers, then as madams and finally as servants. On the dusty back streets of Reynosa, where groups of profane, hard-bitten women turn tricks out of tiny sidewalk-level apartments, it's a drive-by Darwinian free market for every possible sexual act or display, along with drugs, liquor and almost anything else that can be bought or sold. Both these sections of the film are tough to watch, at times, but Glawogger's interviews with the prostitutes (and sometimes with their clients) always reveal things you aren't expecting.

In Thailand and Bangladesh, what happens between the women and their johns remains behind closed doors, but in Reynosa, Glawogger persuades a prostitute and her client to let him film their interaction from beginning to end, an utterly businesslike encounter that's about as sexy as buying half a pound of roast beef at the deli counter. It's a moment of physical nakedness, but not nearly as revealing as when we see the same woman a bit later, smoking crack with a friend who is avidly trying to seduce her and talking about how visions of the Holy Death have eased her fear of mortality. There's no judgment in "Whores' Glory" -- certainly not of the working women it depicts, and not even especially of their bewildered clients, who seem to vacillate from misogynist hostility to wistful romanticism and back again. There is, however, tremendous compassion, and more than a few moments of piercing clarity, as when a Bangladeshi hooker who looks no older than 15 tells Glawogger that women are fundamentally sad creatures. "Who can explain why this is true?" she wonders. "Is there no other path?"

"Whores' Glory" is now playing at the Cinema Village and Lincoln Plaza Cinema in New York, and the Northwest Film Forum in Seattle. It opens May 25 in San Francisco, June 15 in Boston, June 22 in Philadelphia and July 6 in Atlanta and Washington, with other cities and home-video release to follow.