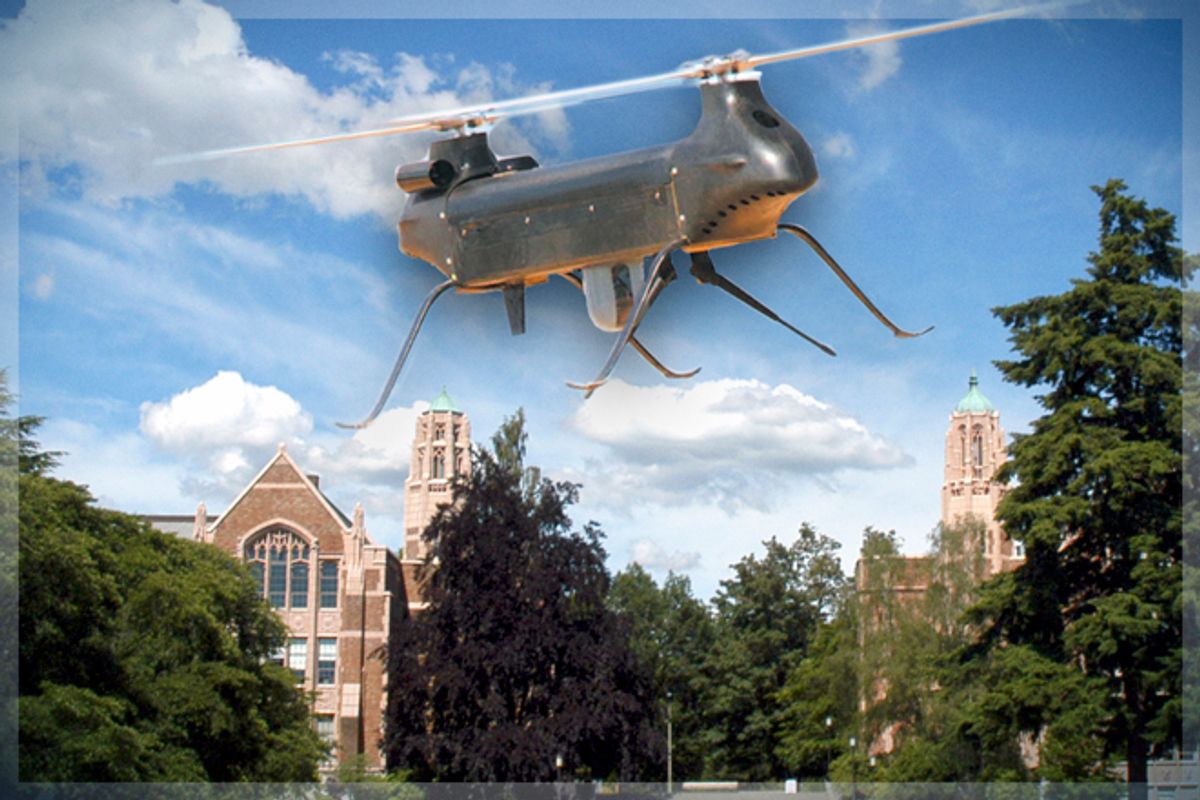 For all the attention given to U.S. law enforcement's interest in adopting drones, the biggest users turn out to be not police departments, but universities. We learned this last week, when the Electronic Frontier Foundation forced the Federal Aviation Administration to reveal that it had approved 25 universities to fly drones in U.S. airspace. Not that universities were waiting on the FAA to begin working in the field: Last fall, Kansas State University created a degree in unmanned aviation. So far, 30 undergraduates have signed up.

The spreading drone curriculum is, for better and worse, a sign of the coming normalization of drones in American life. Interviews with university officials revealed widespread excitement about the possibilities of unmanned aviation technology, which has the potential to transform fields like agriculture and disaster response. The U.S. military, however, is funding parts of this academic research, and so are leading defense contractors. Whether their intentions are as pure as the universities’ is an open question.

"Universities are pushing the limits of the technology," says Lora Weiss, chief lab scientist at Georgia Tech Research Institute. "People are trying to understand how to develop reliable, robust and safe software for all kinds of applications." Students and professors  at Georgia Tech are working on projects ranging from noise-reduction technology for drone engines to the "Flying Android" scheme, an effort to program smartphones to control unmanned aerial vehicles.

At Kansas State University students are assisting the Kansas National Guard's effort to improve its disaster response capabilities by developing drones that can survey towns hit by tornadoes, according to Kurt Barnhart, director of the university's Applied Aviation Research Center. At Middle Tennessee State University students are focusing on "precision agriculture," says Mark Blanks, flight manager for unmanned aviation systems. "They can use an unmanned system to look at weed encroachment," he explains. "If they can identify where the major problems are, the farmer doesn't have to spray the whole field with herbicides. It's better for the environment and it saves the farmer money."

What this means is plenty of gainful future employment in the field of unmanned aviation systems. While Congress' Unmanned Vehicle caucus estimates that drone technology will create 23,000 new jobs in the next 10 years, Blanks says, "That figure may be too low." Barnhart adds, "The skill set use for this technology is going to be pretty important in coming years.”

Not all these jobs will be, however, in agriculture and disaster recovery. As I’ve previously reported, many will be in law enforcement -- where uncomfortable questions about privacy and civil liberties persist. In the view of Georgia Tech's Weiss, recent drone coverage has overemphasized threats to privacy at the expense of civil and commercial possibilities. "Nobody wants to be spied on," she said. "Is it possible that's what unmanned aviation will be used for? Yes. What I'm skeptical about is the drama behind the headlines. I can say confidently very little, if any, research in the field is about spying."

But no government agency interested in using drone technology for spying is likely to disclose its intentions. And  no one disputes that drone technology originated as a way for the U.S. military to identify and track suspected enemies. The role of the Pentagon in funding drone technology on U.S. campuses is visible everywhere. The U.S. Army Research Laboratory funds micro-drone research at Georgia Tech. The Army has pledged to give three drones to Middle Tennessee State. The Air Force's Office of Scientific Research and the Air Force Research Labs in Dayton Ohio fund the work of four professors at the University of Michigan, according to Dan Inman, chairman of the school's Aerospace Engineering Department.

Many of the leaders in the field of domestic drones are military men. Mississippi State University is co-sponsoring a UAV conference later this month to discuss how unmanned systems can "provide solutions in agriculture, coastal environments, and disaster response to name but a few." The keynote speaker will be U.S. Air Force Maj. Gen. James O. Poss, assistant deputy chief of staff for intelligence, surveillance and reconnaissance.

Among the sponsors of the conference are major defense contractors, including Northrop Grumman, Aurora Flight Sciences and Stark Aerospace, a Mississippi-based subsidiary of Israeli Aerospace Industries, one of the world's leading drone manufacturers, which touts its products as useful for "urban warfare." When Northrop Grumman's CEO heralded the coming "age of unmanned aviation" last week, he never mentioned privacy protection.

"As the UAV technology leaves the military arena and enters the civil arena, privacy will be an issue," says Lori Bruce, associate dean of the Bagley College of Engineering and lead organizer of the conference. "I want our state to be as prepared as possible. We want to address it on the front end and not as an afterthought.”

That's why Bagley invited Joanne Gabrynowicz, the director of the National Center for Remote Sensing, Air and Space Law at the University of Mississippi to speak at the conference.

In an interview, Gabrynowicz noted the Internet and cellphones emerged from the commercialization of technologies first developed by the military. Drones are likely to follow the same path and provoke the same concerns, she says.

"The American public is beginning to wake up to the fact that they're tracked by so many technologies," Gabrynowicz notes. "So when people say the threat to privacy from drones is overblown, I say, not if you put it in the context of browsers, cellphones and GPS systems. The interest in drones is just part of this critical mass of interest in tracking. Universities are going to have to address that along with the technology's many possibilities."