"Last Man Standing," a series about a pigheaded misogynist, has become an unexpected paean to open-mindedness 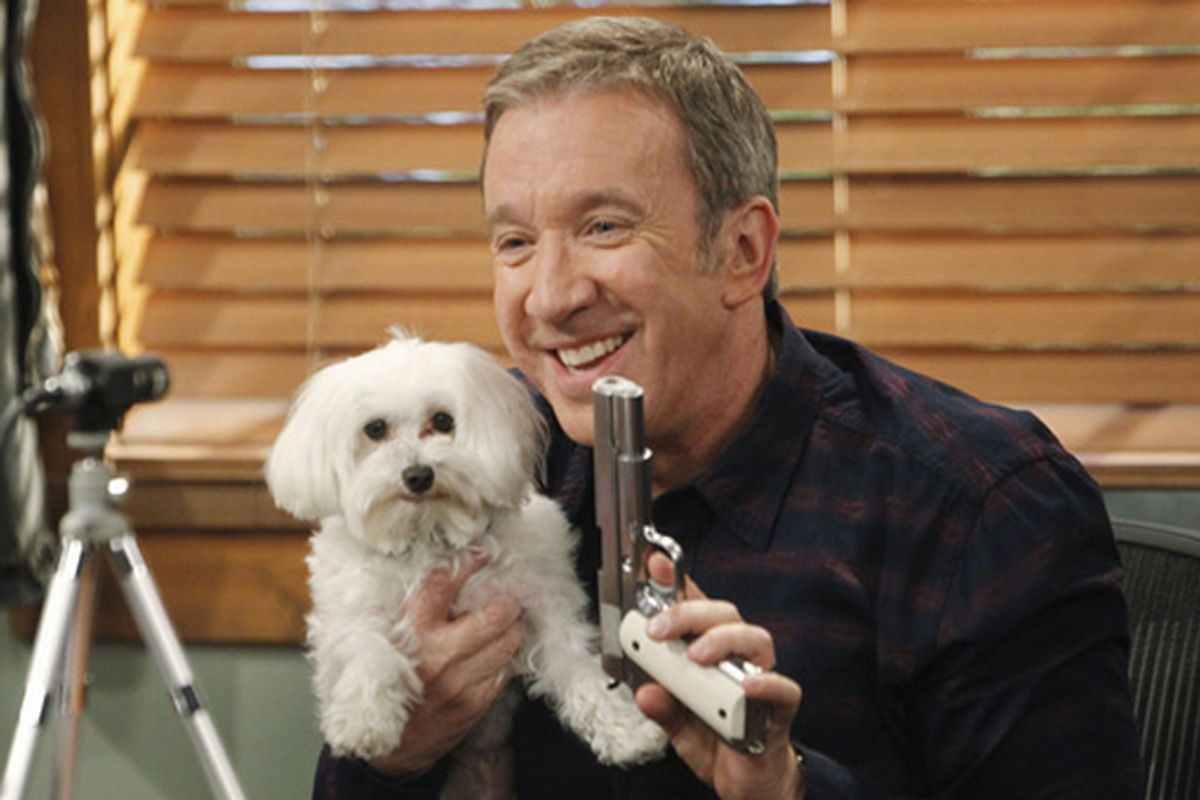 Tim Allen’s sitcom “Last Man Standing," which aired the penultimate episode of its first season last night,  is winding up with far less braggadocio than it began with. The show began as part of a triumvirate of ABC sitcoms about masculinity in crisis, men being besieged and bettered by women at every turn (the other two were the hapless-if-sweet dad sitcom “Man Up” and the all-time cross-dressing horror show “Work It,” which was canceled after two episodes). In the pilot, Allen’s character, Mike Baxter, a hunting and wildlife aficionado who helps run an outdoor equipment outlet, ranted and raved about “what happened to men?” while worrying that a touchy-feely nursery school might turn his grandson gay.

Early episodes of the series were almost all about the battle of the genders, but in a more complicated way than the pilot initially suggested. Mike has a wife and three daughters whom, because of his wife’s promotion, he is spending more time with and to whom he is gruffly devoted. Episode in and out, they exert a civilizing influence on Mike. Writing in Slate about “Last Man Standing’s” transformation into a more nuanced show, June Thomas called out an early episode in which Mike secretly voted to turn his work softball team coed; even though he is a lover of masculine bonding, he couldn’t bear to think of his own daughters being forbidden from doing anything.

The softball episode follows the standard “Last Man Standing” formula: Forceful, bellicose Mike believes or seems like he would believe one thing, and then, through the influence of his all-female family he comes to embrace another, and as often as not, that other is politically liberal. (That softball team only becomes co-ed because the city insists it has to be in order to give it a permit.)

Mike codes as a Republican: His political party is never publicly stated, but he has ranted about Obamacare, hates the intervention of government, is obsessed with Tim Tebow and regularly points guns at the camera. (There are more full-length shots of a Colt-45's in “Last Man Standing” than one would expect in a sitcom.) Mike’s family, who love him very much, are probably also Republicans. His youngest, favorite daughter mimics his distaste for Big Government, and it seems unlikely that anyone could put up with the hectoring Mike for long if they had different political views.

And yet, despite being superficially a show about a strident, forceful libertarian, “Last Man Standing” consistently preaches compromise. (In this way, “Last Man Standing," a show that seems more conservative than it actually is, is the mirror image of “30 Rock,” a show that seems more liberal than it actually is.)  In a recent episode a tree on city property crashed into the Baxters' front window. When a local bureaucrat comes to take a look, he insists that Mike pay for the damage and also cut down a sickly tree on his own property. Mike and his family, who love the tree, grow enraged at “the man” and scream about the Bill of Rights, the Fourth Amendment and government overreach to no avail. Even a family trip to a city council meeting, culminating in Mike’s speech about how important the tree is to the Baxters, has no impact. The tree gets cut down anyway. So Mike buys his family a sapling to plant in the yard. Despite all the complaining about government and the disavowals of being a tree hugger, Mike tries to save a tree and then plants a new one, like a good environmentalist would.

In an earlier episode, when “Last Man Standing” was still a little more hung up on exploring issues with explicit gender ramifications, Mike and his wife, Vanessa, become friends with their lesbian neighbors Rebecca and Charlie. Mike, who generally hates making friends, hits it off with Charlie: They both love motorcycles and the Broncos and hate other people. Their friendship disintegrates when Mike makes a crack about the size of Charlie’s ass. She may be a lesbian, but, as the show puts it, there is no woman in the world who wants her butt made fun of.  With this setup, “Last Man Standing” is, yes, being a bit reductive about women (all women are the same; Charlie goes home to cry on the porch after Mike’s joke), but it’s not doing anything so simple-minded as arguing that lesbians are just like dudes. Later, when Mike and Charlie simultaneously apologize, Charlie makes a pretty blue joke about her and her partner’s sex life, and Mike is comfortable with that. Mike may say misogynistic and homophobic things (see an early joke about his grandson dancing in parades), but he's not exactly a misogynist or homophobe.

In another episode, one of his daughter's boyfriends, Terrence, an animal rights activist (for a group with the acronym PHART— the P is “silent but deadly”), vandalizes an enormous taxidermed bear on display in Mike’s office. Terrence, who has sat in Mike’s living room upbraiding Mike’s wife for fracking (in the pilot Vanessa was a business executive, but she has since became a geologist) and Mike for hunting animals, is later explicitly compared to Mike: They’re both passionate, verbose guys who won’t compromise. Furthermore, the bear Terrence grafittied was actually shot by Teddy Roosevelt, not Mike. If it had been Mike’s kill, both Mike and the show seem to think that Terrence might have a point.

Not all of Mike’s transformations on “Last Man Standing” scan so wholly on red-blue power lines. In other episodes Mike ends up acquiescing to do such “girly” things as like small, fluffy dogs and have emotional conversations with his father. And whether doing those things or planting trees, Mike never flip-flops on "Last Man Standing's" real article of faith —  accepting personal responsibility for your actions and relationships — which is not a partisan issue, whatever Republicans might say about it. Mike is never going to give up on those guns, but he and his show are a lot less pigheaded, paternally and politically, than they first appeared.