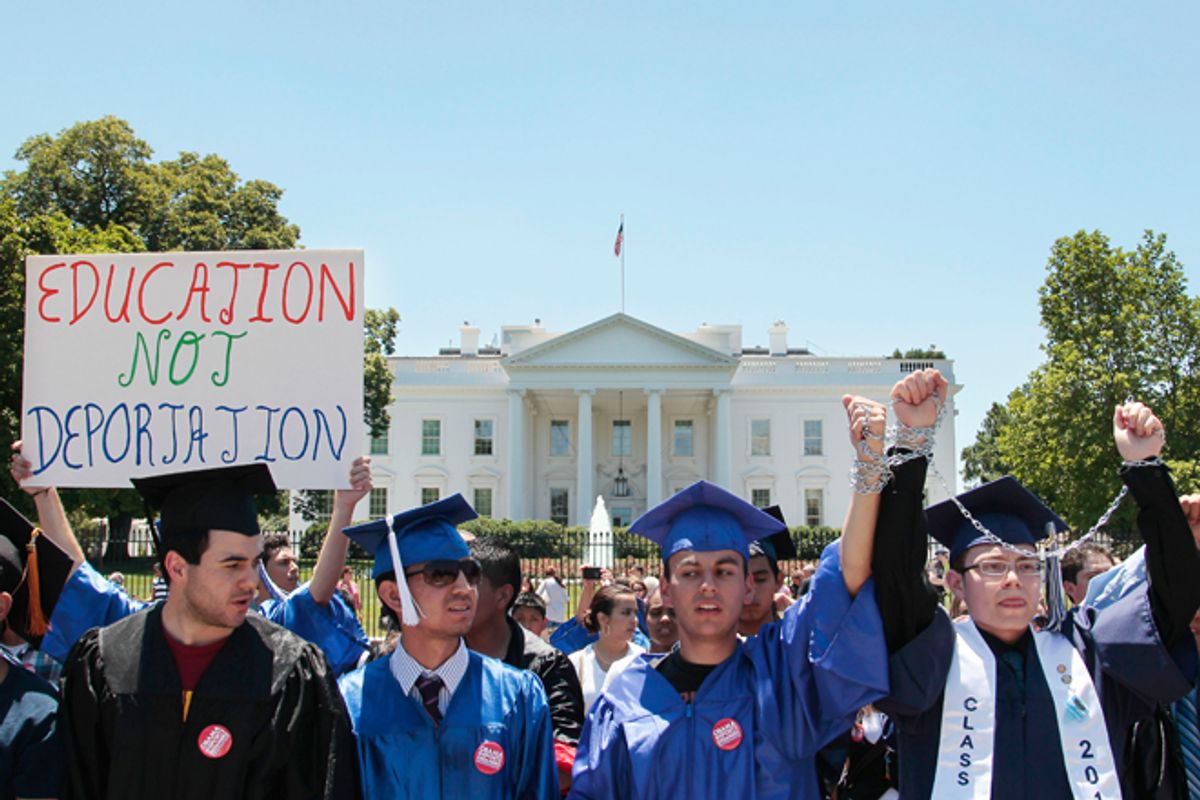 Supporters of the DREAM Act take part in a demonstration in front of the White House. (AP/Pablo Martinez Monsivais)
--

Mohammad Abdollahi has not followed every twist and turn of the national immigration debate.  He has been too busy trying to save a friend from deportation.

Last month, 20-year-old Izlia Luna of Medford, Ore., was stopped by police for a traffic altercation. The judge threw out the charges. But under the mandate of the Obama administration's Secure Communities program, Luna's fingerprints had been taken. She was found to be undocumented. Luna was brought to the United States from Mexico when she was 2 years old. Instead of being released she was sent to an ICE detention facility in  Tacoma, Wash., 340 miles from her home.

"This is what immigration reform under Obama has gotten us," says Abdollahi, who traveled to Tacoma to rally public attention to Luna's case. "The right to spend up to $5,000 to get a loved one out of jail. When Obama says he isn't deporting dreamers, he's lying."

"Marco Rubio is being a lot more authentic with us," Abdollahi added.

The positive response of young immigrants  to Rubio's still-vague alternative to the Democrats' DREAM Act is central to the changing politics of immigration in the 2012 presidential campaign. In a series of meetings in Washington, Rubio is shopping for support, hoping to put forward a legislative proposal in the next few weeks. The Washington Post endorsed the idea on Monday.

By flirting with Rubio, the DREAM activists -- representing an estimated 1 million young Americans, or "dreamers," who are now barred from a path to U.S. citizenship -- have wrong-footed the Obama White House and given pause to reelection campaign officials who had been counting on Latinos to fall in line with the president's reelection. They have also caught the interest of Republican strategists worried about Romney's narrowing path for victory in November.

Rubio is expected to propose the creation of a non-immigrant visa that would ensure undocumented young people who don't have criminal records would not be deported and could eventually become citizens. The original DREAM Act failed to pass  the Senate in 2010.

"We are going to support whoever will come out and talk about the issue," said Gabby Pacheco, a 26-year-old special education teacher from Miami and DREAM Act activist. "Rubio realizes this is key for us. Even if he is only doing it for political reasons, we're willing to listen."

The dreamers are backed by Latino Democrats on Capitol Hill, who feel betrayed by the Obama administration's boasts of deporting a record annual average of 400,000 people over the last four years. After a friendly if inconclusive meeting with Rubio, Rep. Luis Gutierrez of Illinois told Politico his liberal allies  accused him of being the Florida senator's new "best friend."

The Obama White House hates the idea. Last week, presidential advisors Celia Munoz and Valerie Jarrett tried to discourage the dreamers from embracing Rubio's proposal, saying it put at risk the original DREAM Act, which laid out a specific path to citizenship. According to the Washington Post, they had a meeting with DREAM Act-eligible students in Washington, arguing that "Rubio had not demonstrated he could win support from fellow Republicans and that the president would use his clout to push an immigration plan next year. "

Pacheco, who attended the meeting, was not impressed with the White House appeal.

"You can't wait until next year if you're getting deported this year," she said.  She described the White House officials as "very strategic" in their opposition to Rubio. She said the dreamers asked Munoz and Jarrett if the president could stop the deportations by taking administrative action that would not need to be approved by Congress, as Florida immigration activist Cheryl Little recently wrote in the Miami Herald.

"The thing that surprised us was they said no," Pacheco told me. "They said, practically, 'We don't have the power to do this.'We're trying to find out if that is true."

It isn't true, says Laura Lichter, an attorney in Denver and president-elect of the American Immigration Lawyer's Association.

"The Obama administration  could certainly be doing more and better to improve the situation for DREAM Act students and to make immigration law and policy predictable and fair for everybody," Lichter said in a telephone interview. "Whether they're willing to do that in any way that might look like reasonable treatment for the undocumented remains to be seen."

Presumptive Republican nominee Mitt Romney, who has advocated "self-deportation" for the likes of Abdollahi and Luna and the estimated 1 million DREAM Act-eligible students, is noncommittal about Rubio's idea. Romney's hard-line immigration advisor, Kansas Secretary of State Kris Kobach, initially rejected the suggestion as "amnesty," but has more recently said he can "work with" the Florida senator, a nod to the growing realization that running on a platform of "self-deportation" is Romney's ticket to self-destruction among Latino voters in November.

Whether Rubio's gambit can sway Republican votes on Capitol Hill is doubtful. House Speaker John Boehner described passage of such a bill this year as "difficult at best." Helping the undocumented is not a priority for most non-Latino voters, according to Republican pollster Scott Rasmussen.

While elite Republicans like Haley Barbour have said positive things about Rubio's idea, the conservative blogosphere is notably unenthusiastic. The Weekly Standard touted Rubio's recent foreign policy speech while ignoring his much-publicized idea of helping young undocumented Americans closer to home. The National Review hyped Rubio as a Romney running mate without taking a stand  on his proposal "to give the children of illegal immigrants a visa to continue their studies." Talk radio stalwarts like Rush Limbaugh and Hugh Hewitt have yet to mention Rubio's plan, while Mickey Kaus, the Daily Caller's anti-immigrant blogger, notes conservative intellectuals can only agree to disagree on the issue.

If the Republicans' intellectual base seems stumped by Rubio's gambit, the Democratic incumbent comes off as arrogant. In a recent interview with Telemundo, President Obama said:

This notion that somehow Republicans want to have it both ways — they want to vote against these laws [like Arizona and Alabama] and appeal to anti-immigrant sentiment ... and then they come and say, 'But we really care about these kids and we want to do something about it' — that looks like hypocrisy to me.

To the dreamers, Obama is just as hypocritical. "A lot of folks want us to be against  it," Abdollahi said. "At the same time we hear from Obama administration that they're not deporting dreamers. They're tricking us. That’s what makes us supportive of Rubio."