Since clinching the nomination, the candidate's behavior has become even less recognizably human 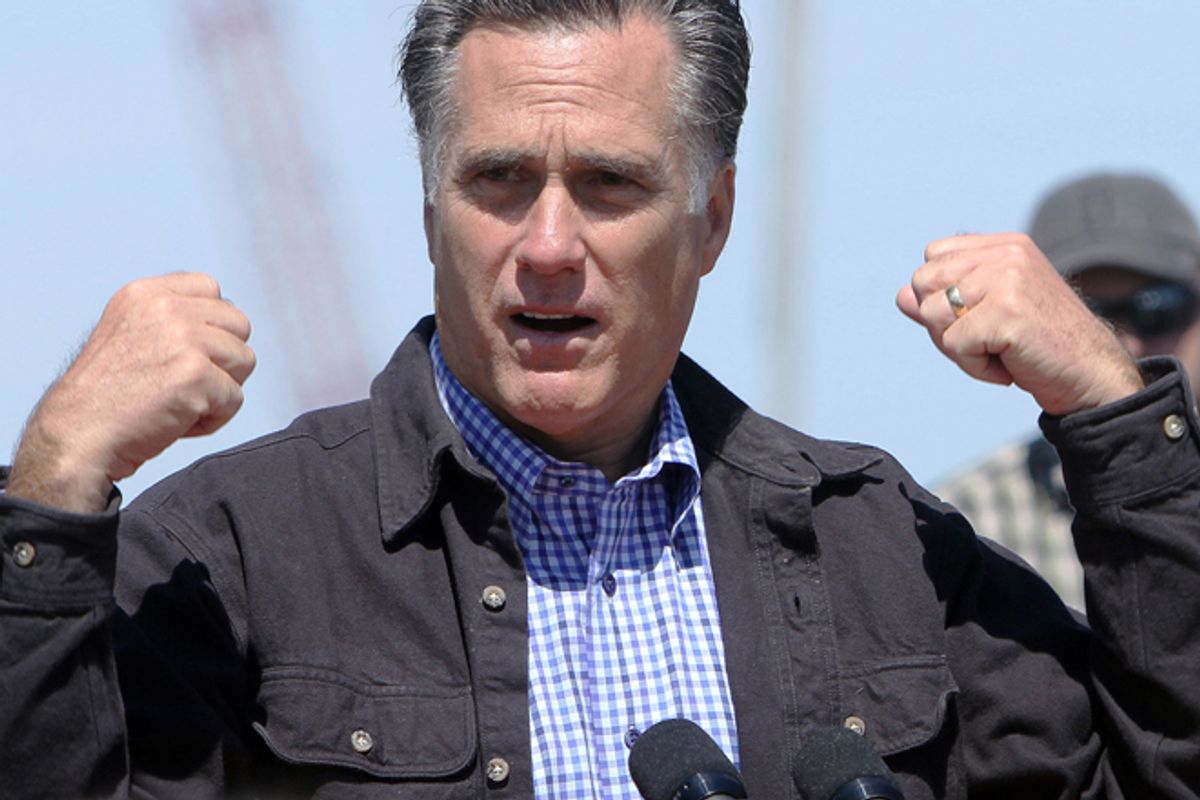 Even before the Republican primaries began, rumors abounded that Mitt Romney was a robot. His zombie-like cheerfulness, his excessively regular features and his strangely perfect-looking family led to widespread suspicion that he had been assembled in Silicon Valley by a team of right-wing nanotechnologists and engineers and shipped secretly to GOP headquarters. The suspicions were far from universal, however. An influential group of skeptics rejoined that cybernetics had not advanced to the point where it could create lifelike humanoids, even ones as unconvincing as Romney, and that the GOP candidate should be considered a human being until it was definitively proven that he was a cyborg.

There the debate rested. Then Romney hit the campaign trail, and the pendulum swung decisively toward those who held that he was constructed out of high-impact plastic. Even the skeptics admitted that Romney’s “personality” did not appear to be of organic origin. He seemed uncomfortable in his own skin (which of course would make sense if he did not have actual skin), and did not know how to tell jokes (humor is notoriously difficult to program). Even the words he used to describe himself sounded like they were auto-imported from a slightly archaic database, as when he oddly described himself as “severely conservative.”

But the clearest sign that Romney had fiber optic cable coiled in his midriff was the bizarrely smug and clumsy way in which he constantly referred to his plutocratic lifestyle. When asked at the Daytona 500 whether he followed NASCAR closely, Romney completely failed to take advantage of this traditional GOP opportunity to demonstrate the common touch. He replied, “Not as closely as some of the most ardent fans, but I have some great friends who are NASCAR team owners.” Two weeks later, in an interview about the NFL, Romney again went out of his way to affirm his membership in a tiny fraternity of disliked multimillionaires, saying, “I’ve got a lot of good friends – the owner of the Miami Dolphins and the New York Jets – both owners are friends of mine.”

The subject of money, in particular, seemed to produce continual script errors, including inappropriate answers, dead-end loops and other rudimentary programming flaws. In Detroit, Romney boasted that his wife “drives a couple of Cadillacs” – the political equivalent of showing up for a photo op at a diner wearing an ascot and a monocle. He casually challenged Rick Perry to a $10,000 bet during a debate, an unforced error that evoked vote-losing images of Fortune 500 CEOs snapping towels at each other in the sauna. But that weird glitch was dwarfed by a statement Romney made a month later. His hard drive apparently malfunctioning after his tax returns were revealed, Romney referred to the $370,000 he had earned giving speeches one year -- an amount it would take the average American worker 14 years to make -- as “not very much.” In short, Romney came across not only as an obscenely rich person, but as an obscenely rich person from another planet.

At this point, some leading technology analysts had begun to openly accuse whoever programmed Romney of gross incompetence. But others defended the unknown scriptwriter, pointing out that the Republican Party’s worship of plutocrats as emblems of “aspirational” capitalism made it impossible to for even the best programmer to write a coherent GOP script about wealth.

Romney’s performance in the primary debates also provided strong empirical support for the Mitt-is-a-cyborg thesis. For the entity claiming to be “Mitt Romney” that appeared onstage bore no resemblance to the Romney-like entity Americans had come to know in previous years. The moderate, conciliatory governor of Massachusetts was gone, his place taken by a strange, harsh figure who appeared to have been programmed by a disciple of Torquemada. Romney Version One had strongly supported a healthcare plan identical to Obama’s; Romney Version Two denounced “Obamacare” as opening the door to socialism. Beta Romney, who had defended a woman’s right to choose, had been replaced by an updated model that, like a doll that speaks a few simple phrases when its bottom is squeezed, intoned “abortion is immoral” again and again.

Different observers had different explanations for this strange phenomenon. Some maintained that “Mitt Romney” had been originally programmed in the factory to flip-flop when politically necessary. Others held that the earlier version had been surreptitiously refurbished, or possibly completely replaced.

Since he clinched the GOP nomination, Romney’s behavior has become even less recognizably human. Following his mechanical move to the far right during the primary season, his even more mechanical attempt to move back to the center has made it appear increasingly likely that he was assembled by nano-machines. His victory speech in New Hampshire was a tape loop of Reagan-like platitudes about free enterprise and Reagan-like blasts at the apocalyptic evil posed by Big Government, topped off with a weird, casuistic attempt to claim that his laissez-faire, I’ve-got-mine-Jack ideology was “fairer” than Obama’s attempt to shrink the increasing gap between rich and poor. Instead of the Great Communicator, Romney came off like a Frankenstein monster, cobbled together out of various right-wing bits and pieces, trying simultaneously to appease Tea Party extremists and clank back to the middle, all while smiling a big, artificially-whitened smile.

His inability to impersonate a human being poses severe political problems for Romney. But the worst is yet to come. Republican strategists are now advising Romney to stop attacking Obama and offer a “positive vision.” Most experts believe this simply cannot be done. Romney’s CPU, set up to defend cutthroat capitalism, destroy his opponents, and present the innocuous centrist Barack Obama as the reincarnation of V.I. Lenin, cannot accommodate the impossible demand that he suddenly become “human.” No one knows whether he will literally melt down in public with smoke pouring out of his eye sockets, or will simply begin regurgitating meaningless phrases about an “opportunity society,” like the unplugged super-computer HAL in "2001: A Space Odyssey." But sooner or later, Romney is doomed to a fatal system error.

Like Arnold Schwarzenegger in "The Terminator," Romney is about to be turned into scrap metal. But there is still time for him to save his campaign. If Mitt Romney wants to be president, he must appear before the American people on prime-time TV and admit that he is a robot.

With this one bold stroke, Romney would dispel all questions about his authenticity. After all, unlike human beings, robots are not expected to demonstrate consistency in their beliefs and actions. They do not have “selves,” only circuits that react in programmed ways to new situations. The instant Romney shows the nation the power cable hidden in his posterior, his self-contradictory positions and blatant pandering will cease to be seen as a cynical grab for power. Instead, they will become the visible manifestations of an advanced Google-like algorithm, inspiring technological interest and respect.

A frank confession that Romney plugs himself into a socket in his garage every night would also end the criticism of his wooden demeanor. "Star Wars," "Mystery Science 3000," "The Terminator" and other pop-culture hits have popularized lovable, wisecracking, helpful robots. Romney would be far better served if he was seen as C3PO, rather than a stilted, fake-Tea-Party plutocrat boasting about his friendships with other plutocrats.

Moreover, by forthrightly admitting that his head swivels around on a titanium base, Romney would instantly wipe out Obama’s advantage among young voters. Tech-savvy young Americans prefer Facebook, Tumblr, Zynga, smartphones and iPods to reality anyway, and would jump at the chance to make their generational mark by electing a president who is one of them (and can be easily disassembled and shipped back to the factory for repair.)

Finally, if Romney were to stand before the American people, remove his head and forthrightly admit that he is a robot, he would get rid of the biggest albatross around his nonexistent neck: his leadership of the private equity firm Bain Capital. As a human being, Romney cannot justify the rapacious, job-destroying actions engaged in by Bain. When critics – including his GOP rivals – rightfully accused him of practicing “vulture capitalism,” all Romney could say was “In the free economy, in the private sector, sometimes investments don't work and you're not successful.” Coming from a human, this answer is heartless. Coming from a robot, it feels almost cuddly.

Which points to the real reason Romney should admit to being a robot – whether he is one or not. As a human being, Mitt Romney is a flop. But as a robot, he’s positively human.