Updated: The neo-Nazi who allegedly killed five people was once praised as a "true patriot" by Russell Pearce 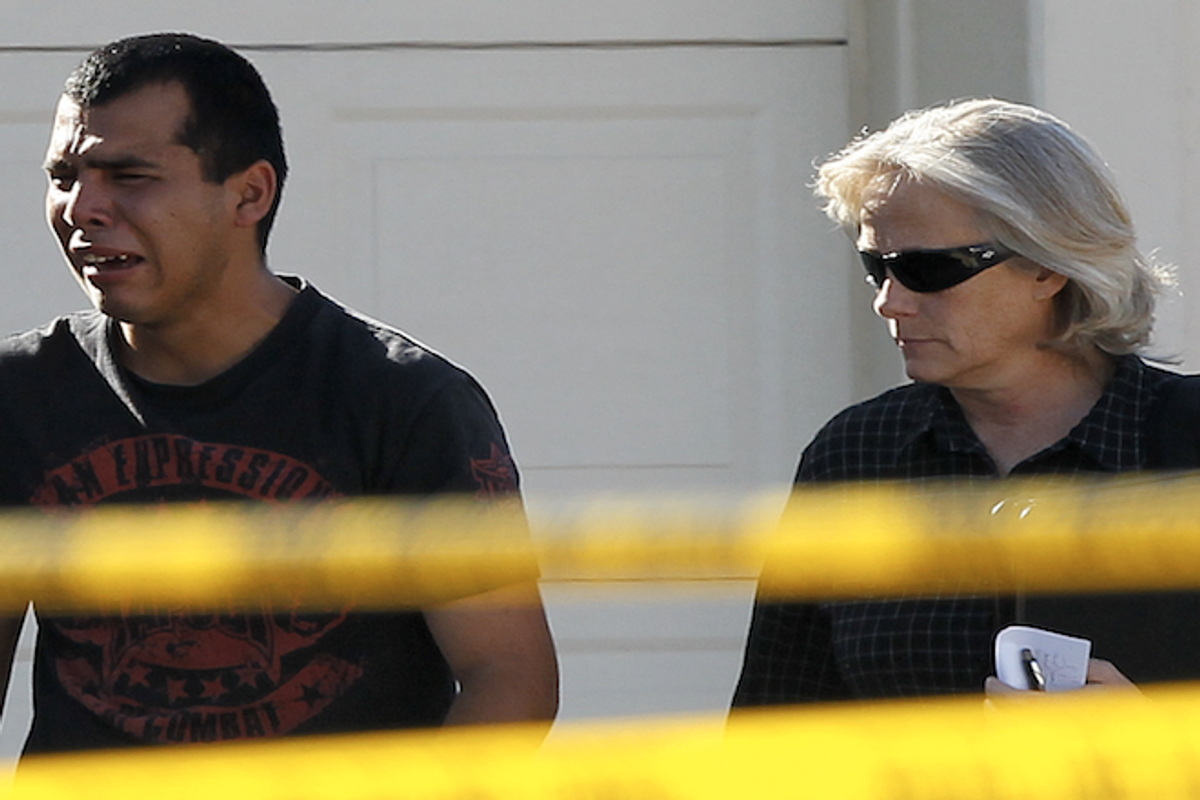 A police officer walks with a man who said he had a child inside of the home where five people were shot Wednesday, May 2, 2012 in Gilbert, Ariz. (AP Photo/Matt York)
--

Less than a month after Russell Pearce crowed at a Gilbert, Ariz., Tea Party meeting that Republican presidential candidate Mitt Romney's "immigration policy is identical to mine" -- a brash claim that Republican operatives scrambled to explain -- the self-proclaimed Tea Party president and architect of Arizona's punitive immigration law might now be scrambling himself. Pearce has previously praised J.T. Ready, the alleged gunman in Wednesday's  tragic killing of five people in the same Phoenix suburb.

In 2006, Pearce told an interviewer on a video that emerged last year that he also considered Ready to be a "true patriot, to the real purpose, the limited purpose, to the Republican platform that we have."

According to news reports, Wednesday's victims included Ready's apparent girlfriend, two others adults and a child, along with Ready's apparent suicide, and was most likely connected to a domestic dispute.

While Ready, a neo-Nazi activist, might have made more headlines for his "U.S. Border Guard" and defiantly white supremacist tirades against immigrants from Mexico, his shadowy connections to Pearce and others in Arizona's extremist political circles remain troubling.  Earlier this spring, Ready had announced his intention to run for sheriff of Pinal County, on the outskirts of Phoenix.

Ready possessed an undeniable showmanship and proclivity for attracting media attention to Arizona's immigration crisis.  He had been court-martialed twice from the military, yet still managed to invoke the veteran tag until he was stripped of his role as master of ceremonies for a Veteran’s Day parade in Mesa. That didn’t stop Ready from making a failed bid for the Mesa City Council, or gaining a spot as a precinct committeeman for the Republican Party in 2008.

Thanks to Phoenix New Times' Stephen Lemons’ indefatigable muckraking over several years, we know how Ready involved himself with the National Socialist Movement and nativist border groups while maintaining a relationship with Pearce. In fact, Pearce had taken part in Ready’s baptism in the Mormon Church and ordained him as an elder in the Melchizedek priesthood.

Despite the mounting evidence, Pearce denied association with Ready and emailed Lemons in response to the "true patriot" video in the winter of 2011: “No one could have known or guessed he would later become involved with radical hate groups."

However, the Anti-Defamation League in Phoenix had already warned Pearce about Ready’s Nazi activities in 2006. A year later, local media began to report on Ready’s white supremacist affiliations after a legislative hearing. At an anti-immigrant rally in Phoenix in the summer of 2007, Pearce had watched admiringly as Ready wooed the crowd.

In the end, it was Ready who felt betrayed by Pearce’s political maneuvers.  “He’s supposed to be a lawman,” Ready charged in a taped interview with Phoenix videographer Dennis Gilman, after Pearce closed the door on their relationship due to all of the media attention, “but he has a pattern of criminality.”

"He is the worst kind of racist," Ready referred to Pearce in a New Times interview in the fall of 2010. "One who will do anything to achieve power, then trample on our rights like a tyrant when he gets that power.

Ready added, "I christen him Grand Wizard of the AZ Senate!"

Ready's connections are not just limited to Pearce. State legislator Sylvia Allen introduced a bill this spring for Arizona to fund and arm its own border militia, which was arguably modeled on Ready's controversial militia antics that won national media-coverage.

As national debate raged over SB 1070 in the summer of 2010, Ready announced his militia initiative on his “white supremacist New Saxon site, inviting participants to "bring plenty of firearms and ammo." Ready admonished: "Camouflage or earth tone clothing [is] preferred…Bandanas, balaclavas, or other identity concealing items are permissible and encouraged." He declared: "This is the Minuteman Project on steroids! THE INVASION STOPS HERE!"

Regardless of any connection he may have had to that attack, Ready has brought another bitter chapter of death to the border state's headlines.

Update: Russell Pearce has released a statement regarding his relationship with Ready. "I knew JT Ready, I did, as did many of us who have been involved in Mesa politics for a long time. When we first met JT he was fresh out of the Marine Corp and seemed like a decent person," it reads, in part. " At some point in time darkness took his life over, his heart changed, and he began to associate with the more despicable groups in society. They were intolerant and hateful and like so many who knew him from before, I was upset and disappointed at the choices he was making. I worked with others to have him removed from his local position within our Republican Party because there has never been and will never be any room in our Party or our lives for those preaching hatred."