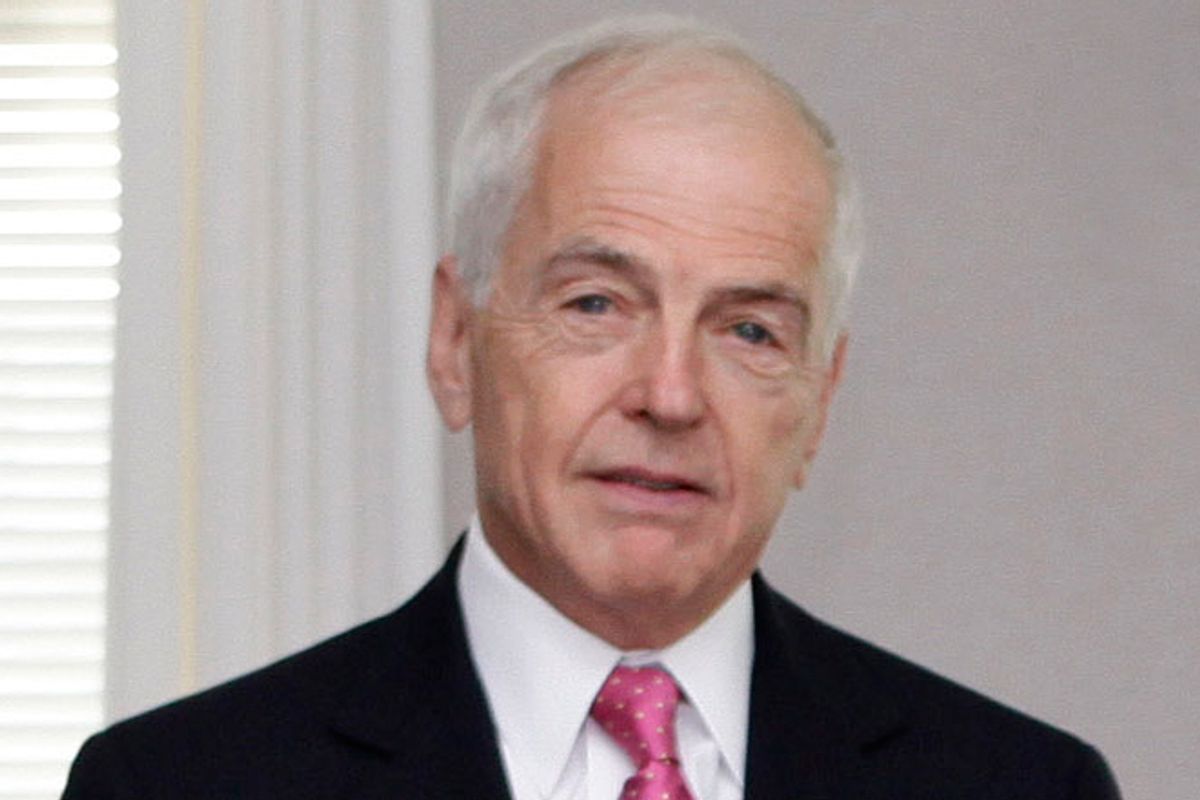 Last week, the Romney campaign finally broke its silence on an advisor's role in a growing scandal. A report released last night shows why it had to.

In September, Mitt Romney named former National Labor Relations Board Chairman Peter Schaumber as the co-chair of his campaign’s Labor Policy Advisory Committee. Then in March, the NLRB’s inspector general named Schaumber as the recipient of leaked confidential info from current NLRB member Terence Flynn – and the Romney campaign avoided comment for a month.

Last Thursday, Rep. Elijah Cummings announced that the IG would be releasing a follow-up report, and was referring his findings to the Office of Special Counsel “for potential Hatch Act violations due to Mr. Schaumber’s role as a senior advisor” to Romney. (The Hatch Act bans public officials from using government access to advance political campaigns.) The new report, released last night by the House Education and Workforce Committee Democrats, is a sequel that truly outdoes the original.

The same day Cummings announced the forthcoming report, Romney Etch-A-Sketched Schaumber – sort of. The campaign issued no statement, but a “Romney campaign aide” told the Hill that Schaumber had already stepped down from his campaign role sometime in December. That’s the same month that Flynn learned he was being investigated by the IG. (The Romney campaign did not respond to a request for comment.)

“It’s hardly a coincidence,” said AFL-CIO spokeswoman Alison Omens in an emailed statement, “that Schaumber resigned from the Romney campaign the same time his inside source at the board was notified he was being investigated.”

When Romney tried to dump right-wing anti-immigrant warrior Kris Kobach as part of a post-primary pivot, Kobach talked back, telling Think Progress he was in fact still advising the candidate. Romney shouldn’t have that problem with Schaumber, who’s been keeping his mouth shut since being named in the IG report last month. But there are some facts that complicate the Romney campaign’s narrative. A month after Schaumber’s supposed departure, he appeared on Fox News to discuss Republican outrage over Obama’s NLRB appointments (one of whom was Schaumber’s alleged mole, Flynn). The host introduced Schaumber as a “top advisor” to Romney – as did the Fox chyron – and asked him about Romney’s stance on the NLRB. (She also asked him about NLRB investigations of Bain Capital; Schaumber pleaded ignorance of the details, then launched into a blanket defense of companies that get investigated by the NLRB.)

Romney’s website was also slow to adjust to his supposed months-old parting with Schaumber. Until recently, a link to an essay by Schaumber was prominently displayed on his Labor page, and the press release announcing his appointment was in the campaign’s archive. Now, the Web addresses for both bring up pages reading “Access Denied.”

Looks like Team Romney is trying to put distance between itself and Schaumber’s scandal without actually addressing it. But the scandal is just getting started.

The IG’s new report, like its first, finds that Flynn, then counsel to another Republican NLRB member, did much more than “discuss issues” with Schaumber, as his attorney claimed. That includes forwarding Schaumber draft opinions in cases days before the board had voted on – let alone released -- a decision. The IG says Flynn also sent Schaumber an email from then-Chairwoman Wilma Liebman setting out which cases were “her top priorities” to rule on that term. (Liebman declined to comment.) The IG wrote that Flynn provided Schaumber info that the NLRB would have withheld even if Congress requested it. “Mr. Flynn’s public statement that he has engaged in no wrongdoing,” wrote the IG, “strikes at the very heart of the Board and all but eviscerates the due process procedures that the Board has established.”

And according to the report, Romney’s erstwhile advisor wasn’t a passive recipient of Flynn’s emails.  In January 2011, Schaumber emailed Flynn back about a dissenting opinion – a month before the board’s final vote on the case – and said it was “quite good,” but “It would have been nice if he cited me :).”

In September 2010, Flynn sent Schaumber edits on a draft of a Wall Street Journal Op-Ed Schaumber was writing, but added his “misgivings” that Schaumber's drawing an “angry glare” to the NLRB could hurt “the prospect of my nomination” to become an NLRB member himself (at the time, Flynn was still only counsel to another member). Schaumber replied with a reassurance that it wouldn’t, based on his conversations with “Schneider” -- perhaps a reference to Senate Minority Leader Mitch McConnell’s policy advisor Dan Schneider (McConnell's office did not immediately respond to a request for comment.) When Obama indeed nominated Flynn, Flynn emailed Schaumber, “Thank you, my friend.” Schaumber responded that while he could have gotten himself nominated to return to the board instead, “I wanted you to have the opportunity.” The IG wrote that, “The situation gives rise to the appearance that Mr. Flynn’s disclosure of deliberative information and assistance to former Member Schaumber was in return for former Member Schaumber’s lobbying on behalf of Mr. Flynn’s nomination.”

(Schaumber did not respond to a request to be interviewed by the IG, and could not be reached for comment.)

Emails released by the IG suggest that at least one former colleague suspected Flynn and Schaumber were collaborating. According to the report, on March 30, 2011, Schaumber sent Flynn a draft of an Op-Ed for the Hill’s website. Flynn, who had participated in deliberations on the case being discussed, promised Schaumber “extensive” revisions. After a series of emails, the post was published on April 18.  Schaumber sent the link to Flynn, who responded positively. An hour later, then-Chairwoman Wilma Liebman also sent Flynn the link, with the comment, “Trust you saw this.  Perhaps even wrote it.” Instead of claiming his handiwork, Flynn responded, “I’m not familiar with that blog, but thank you.”

Four months later, just before being tapped by Romney, Schaumber trashed Liebman to Flynn, writing that “neither [NLRB member] Craig Becker nor Wilma told the truth when false statements would better serve their goals…”  Flynn agreed.

Following the release of the IG’s follow-up report, the NLRB’s current chairman broke his own silence on the scandal. In an emailed statement, Mark Pearce said, “We take the findings in these reports very seriously. They raise questions of ethics and trust that go to the heart of the values shared by all of us at the NLRB. Those concerns are paramount in our minds as we consider the necessary response.” (The White House declined to comment.)

In an emailed statement last night, Democratic Sen. Tom Harkin called for Flynn’s immediate resignation, saying that the evidence, and his response to it, “suggests that he lacks both the professional judgment and ethical integrity to continue serving on the Board.”  Rep. George Miller also called for Flynn’s resignation, writing that, “Disclosing judges’ deliberations in pending cases to outside parties, for example, is repugnant to the American justice system.”

In response to Salon’s inquiry, Flynn’s attorney forwarded a May 2 letter to the IG that questioned the integrity of the investigation and said that  “the evidence shows that Mr. Flynn was simply discussing issues of mutual interest with a former close colleague.”