How to lose a swing state

Hint: It has to do with teaming up with Michele Bachmann and the public face of mandatory transvaginal ultrasounds 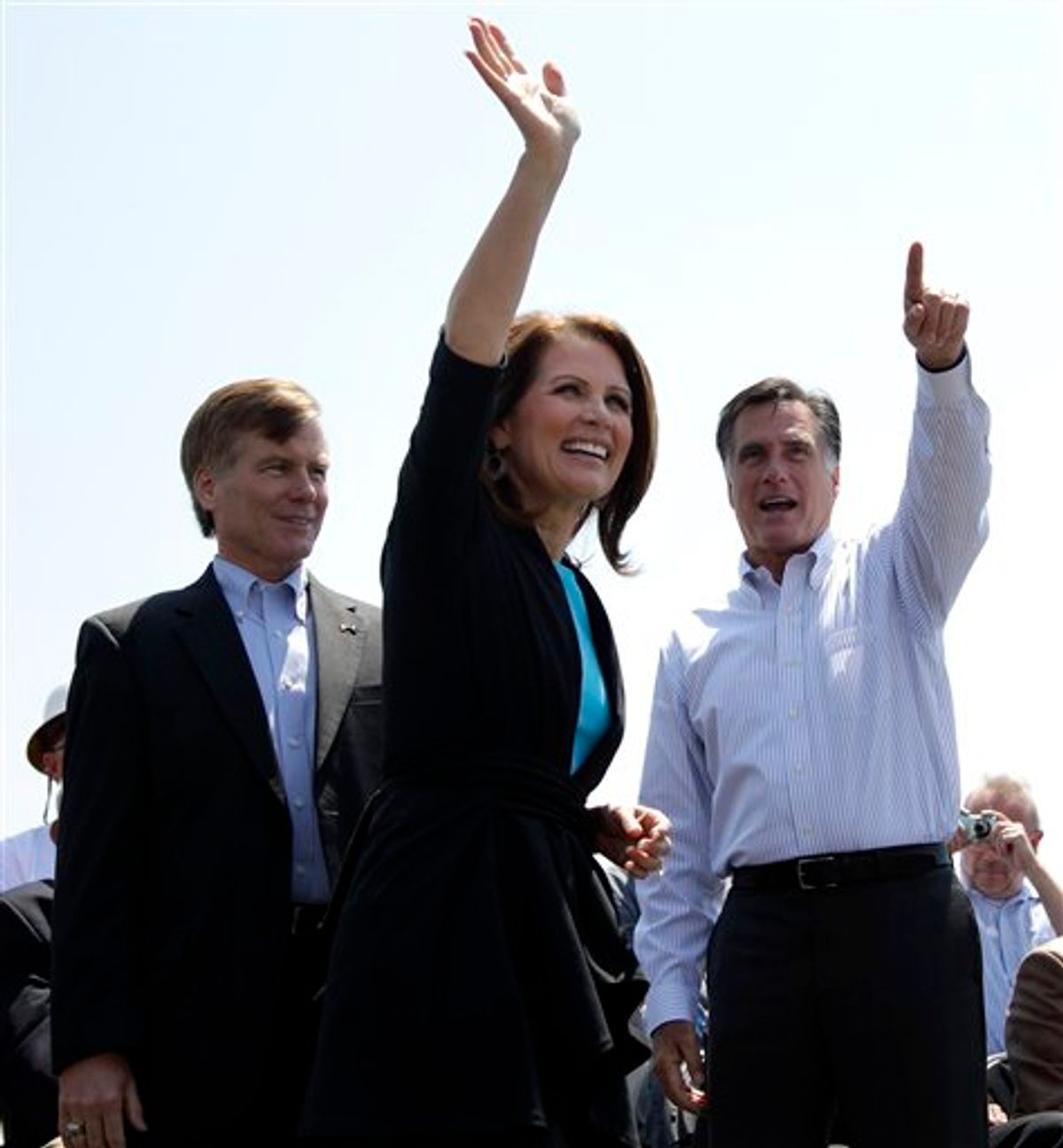 Virginia’s demographic evolution has transformed it from a bastion of Old South conservatism into a more culturally and ideologically diverse midatlantic swing state. When in 2008 Barack Obama became the first Democrat since LBJ to carry the state, his winning margin was 6 points -- identical to the national spread, and clear evidence of Virginia’s emergence as a premier presidential battleground.

In the highest-profile event of his Old Dominion swing, Romney was joined on Thursday by Bob McDonnell, the state’s governor, and Michele Bachmann, his one-time GOP foe. His alliance with both of them speaks to some serious general election obstacles that Romney faces in Virginia and in swing states across the country.

Start with McDonnell. The governor’s poll numbers aren’t exactly awful right now, but they’re headed in the wrong direction thanks to the polarizing, far-right legislation he’s pushed this year. McDonnell is probably best known now for his advocacy of a bill to force women to undergo an invasive, medically unnecessary transvaginal ultrasound before receiving an abortion. After fierce protests, the bill was modified to give women the option of a less invasive, equally medically unnecessary abdominal ultrasound and signed into law by the governor, who also recently did away with his state’s one- per-month restriction on handgun purchases.

This makes teaming up with McDonnell tricky for Romney. Overall, McDonnell’s approval rating is still decent, but Romney faces a particular challenge with female voters, who are more likely to be offended by McDonnell and his agenda.

A new Washington Post poll tells the story. In 2008, Obama beat John McCain in Virginia by 6 points, with virtually no gender gap; Obama’s margin was 7 points with women and 4 with men. In the new poll, Obama’s lead over Romney is 7 points – but now there’s a massive gender gap: The president now leads among women by 18 points. To make Virginia red again, Romney needs to chip away at this number, a task that is complicated by a partnership with McDonnell. This may be more true outside Virginia, where Romney also faces a gender gap and where McDonnell is less well-known and exists only as a symbol of the GOP’s “war on women.”

Then there’s Bachmann. Romney had no choice but to share the stage with her on Thursday. The Minnesota congresswoman represents a particular type of Republican voter that remained intensely resistant to Romney through the GOP primaries, even as he became the inevitable nominee: evangelical Christians. Romney badly needs them to turn out in droves this fall, so if Bachmann – or any other highly visible Christian conservative – decides she’s ready to endorse him, Romney is hardly in a position to say no.

The problem, of course, is that the culture war issues that matter most to Bachmann and the Christian right can be a serious turn-off to swing voters. So any time Romney is seen with Bachmann or any other prominent Christian conservative, he risks reminding voters he’ll badly need in November of what they like least about the Republican Party.

The problem goes beyond optics, too. Substantively, Romney is under intense pressure to keep the Bachmann crowd happy, and not to arouse their suspicions that he isn’t really one of them, and that he’s just been faking his conservatism to win the GOP nomination. This could force him to take positions and actions between now and Election Day that will unsettle the rest of the electorate. In that sense, the departure this week of an openly gay Romney staffer – who quit the campaign when it wouldn’t back him in the face of protests from the Christian right – could be a preview of what’s to come for the next six month.

Romney still has a few things for himself -- most notably a lousy economy that continues to stoke widespread anxiety. The Romney campaign’s bet is that this will be enough to convince swing voters to change presidents, something Romney reinforced with his promise at a Virginia event on Thursday to simply do “the opposite” of what Obama has done. Obama’s strategy is more nuanced and context-dependent, asking voters to measure not just what he’s done and what he stands for, but also what the Republican Party stands for and how it has behaved. In this quest, Republicans like Bob McDonnell and Michele Bachmann are his allies.