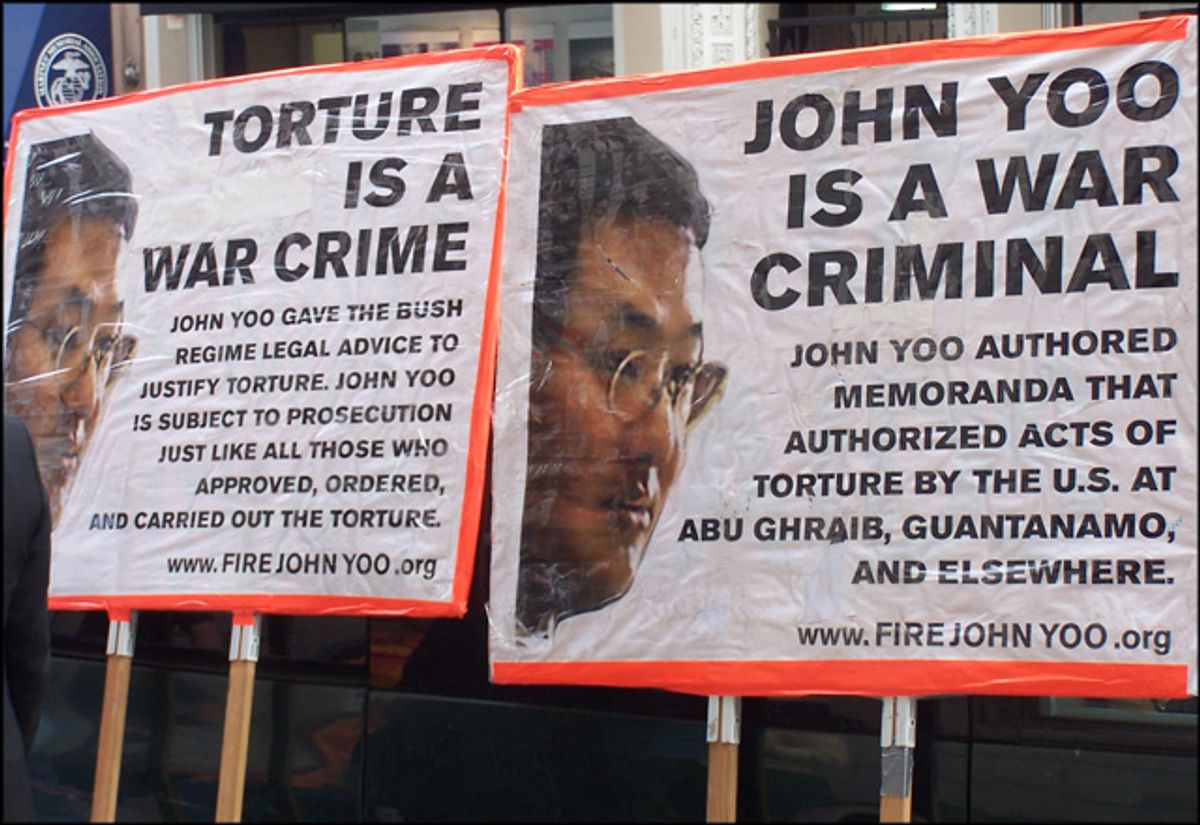 The abdication of U.S. federal judges in the post-9/11 era, and their craven subservience to Executive Branch security claims, has been a topic I've written about several times over the past couples of weeks. Yesterday, the 9th Circuit Court of Appeals adopted the argument of the Obama DOJ that John Yoo is -- needless to say -- fully immune from any and all liability for having authorized the torture of Jose Padilla, on the ground that the illegality of Yoo's conduct was not "beyond debate" at the time he engaged in it. Everything I wrote a couple of weeks ago about the identical shielding of Donald Rumsfeld by federal courts and the Obama DOJ from similar claims applies to yesterday's ruling, and The New York Times has a good editorial today condemning this ruling as "misguided and dangerous."

In sum, this yet again underscores that of all the American institutions that have so profoundly failed in the wake of 9/11 to protect the most basic liberties -- Congress, both political parties, the establishment media, the Executive Branch, the DOJ specifically -- none has been quite as disgraceful as the federal judiciary, whose life tenure is supposed to insulate them from base political pressures that produce cowardly and corrupted choices. And yet, just consider these two facts:

(1) not a single War on Terror victim -- not one -- has been permitted to sue for damages in an American court over what was done to them, even when everyone admits they were completely innocent, even when they were subjected to the most brutal torture, and even when the judiciary of other countries permitted their lawsuits to proceed; and,

(2) not a single government official -- not one -- has been held legally accountable, either criminally or even civilly, for any War on Terror crimes or abuses; perversely, the only government officials to pay any price were the ones who blew the whistle on those crimes.

That is how history will record the behavior of American federal judges in the face of the post-9/11 onslaught of anti-Muslim persecution and relentless erosions of core rights.

Even worse, if you're a Muslim accused of any Terror-related crime, your conviction in a federal court is virtually guaranteed, as federal judges will bend the law and issue pro-government rulings that they would never make with a non-Muslim defendant; conversely, if you're a government official who abused or otherwise violated the rights of Muslims, your full-scale immunity is virtually guaranteed. Those are the indisputable rules of American justice. So slavish and subservient are federal judges when it comes to Muslim defendants that if you're a Muslim accused of any Terror-related crime, you're probably more likely at this point to get something approximating a fair trial before a Guantanamo military tribunal than in a federal court; that is how supine federal judges have been when the U.S. Government utters the word "terrorism" in the direction of a Muslim or any claims of "national security" relating to 9/11.

Just to underscore the point a bit further: the Justice Department filed a report this week setting forth its 2011 eavesdropping activities under FISA. Here's the summary (h/t EPIC):

# of DOJ requests to the FISA court to eavesdrop on and/or physically search Americans/legal residents: 1,745

The DOJ filed close to 1,800 requests for FISA court permission to eavesdrop on the electronic communications of Americans or legal residents or to physically search their property (the vast majority, more than 90%, were for eavesdropping), and the FISA court did not deny a single request, though they did "modify" 30. This is a perfect expression of how the federal judiciary, in general, behaves in the face of claims of National Security from the Executive Branch: as an impotent, eager rubber-stamping servant.

Just by the way: the 1978 FISA law that required court approval before the U.S. Government could eavesdrop on Americans has produced this sort of blindly accepting rubber-stamping from the FISA court since its inception. Nonetheless, it was this FISA process that the Bush administration claimed was too significant of an obstacle to its eavesdropping powers when it decided to violate the law by eavesdropping without asking for FISA court permission, and it's the same claim which the Democratic-led Congress and then-Sen. Obama made in 2008 when they enacted a new FISA law that dramatically expanded the U.S. Government's warrantless eavesdropping powers. A 100% victory rate in court is apparently too low for those who see presidential powers as monarchical, and our nation's federal judges seem all the time to be eagerly attempting to increase that rate.