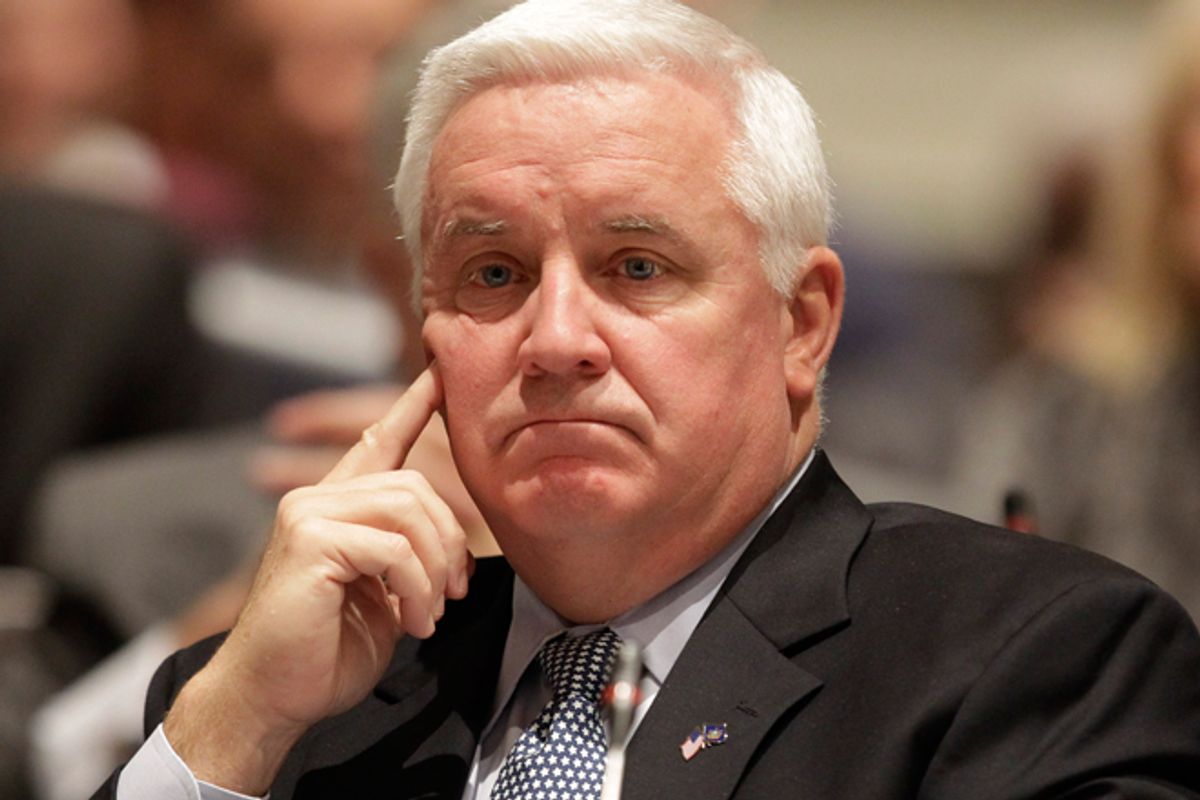 In 2010, the governor's mansion in four key Rust Belt swing states — Pennsylvania, Ohio, Wisconsin and Michigan — flipped from Democratic to Republican control. This was supposed to be a boon to whomever became the 2012 Republican nominee. “Republican control of the majority of 2012 swing states is a major roadblock to the President’s reelection,” Haley Barbour crowed at the time. But increasingly, these erstwhile allies are turning into greater liabilities than assets.

Take, for example, Pennsylvania. Democrats there are already hard at work to tie Mitt Romney to Gov. Tom Corbett, whose antiabortion statements and austere budgets have proved unpopular in the state.

“He is becoming a more polarizing figure,” says Muhlenberg College political science professor Christopher Borick, who calls the gender gap a “treasure trove” for Democrats. “If I'm putting an ad out in Pennsylvania and I want to show Republicans to be opposed to women's issues, I run sound bites from Tom Corbett next to those of Rick Santorum and Rush Limbaugh, and anybody else I can find.”

The Democratic National Committee did so in April in an advertisement released after Corbett endorsed presumptive Republican nominee Mitt Romney, replaying the governor's Internet sensation of a statement that women forced to watch a pre-abortion ultrasound "just have to close your eyes.” The ad called both “too extreme for women.”

The same is the case in Ohio and Wisconsin, where Republican governors have waged aggressive campaigns against public-workers unions. Romney hasn’t taken any chances with the potentially toxic ally in Wisconsin Gov. Scott Walker: Despite Walker’s endorsement, Romney did not appear with the governor during his primary fight against Rick Santorum.

“Walker is a vulnerable Republican,” Nation reporter John Nichols told "Democracy Now." “And so, especially in the case of Mitt Romney, being photographed a lot with Scott Walker, only to have Scott Walker turn around and be defeated a month or so later, is not necessarily a positive, either.”

The diminished regard for these swing-state governors is a reflection of the shift in conservative politics from Washington to the statehouses. Unlike their obstructionist counterparts in D.C., conservative governors and statehouses have leveraged total control over government to attack organized labor, gut aid to the poor and disabled, slash spending on schools and universities, push through antiabortion restrictions, chip away at environmental protections and weaken gun control laws. Just as Democrats have transfigured the Republican social agenda into a politically serviceable “war on women,” the conservative attack on unions, public education and the safety net could likewise become a liability in an election season defined by a debate over economic fairness and inequality.

“As the general election campaign commences more fully I think you're going to find voters really paying attention to what's gone on within their state and how that affects their willingness to vote for one party or another,” says Paul Beck, a political scientist at Ohio State University. “The Democrats are going to push very hard that the Republicans are simply too extreme and that Romney is more conservative than the public, and try to connect him to what's going on within the various states.”

Corbett is a case in point. The low-profile governor gained widespread attention in January when he announced new restrictions on the food stamps that feed 1.8 million Pennsylvanians, including 439,245 in Philadelphia: people under 60 with more than $2,000 in savings or other assets (homes and first cars excluded) would be barred from receiving aid, and those over 60 would have a $3,250 cap. The conflict got widespread attention because it echoes a national debate: U.S. Rep. Paul Ryan, the House Budget Committee chairman, proposed slashing $127 billion from the federal food stamp program, while Newt Gingrich's invocation of the “food stamp president” proved an effective line to the Republican base. But in Pennsylvania, the outcry from hunger advocates and Democrats was swift — and eager.

"This is one of the most mean-spirited, asinine proposals to come out of Harrisburg in decades," said Philadelphia Mayor Michael Nutter. "I literally cannot understand what problem they are trying to solve."

Agriculture Secretary Tom Vilsack even jumped into the fray, noting food stamps are largely federally funded and that Corbett's move would cost the state money. Corbett beat a hasty retreat, and the asset limits were raised to $5,500, and $9,000 for the disabled and elderly.

But the governor's conservative agenda has taken a toll on his popularity: A March poll from Quinnipiac University found that just 41 percent of respondents approved of Corbett's performance  (down from 47 percent approval in December), with 41 percent disapproving. And while 48 percent of voters oppose mandatory ultrasounds (42 percent support them), this year's austere budget, and a proposed budget for next year heavy on cuts to higher education and welfare programs, have prompted even greater opposition: 49 percent oppose his handling of a budget that cuts services to the poor and disabled (36 percent support them); and a full 65 percent oppose his proposed cuts to public universities.

Progressive activists, however, concede Corbett's political savvy: He avoided the national notoriety attached to counterparts like Walker during his first year in office, placating powerful public-employee unions by signing a four-year contract in 2011 and backing down from his initial call for a cut in wages.

“I think that Governor Corbett is amazingly unknown in the state of Pennsylvania for someone who has pretty successfully started to dismantle the public education system,” says Gabe Morgan, president of Pennsylvania SEIU State Council. “I don't really see him as being able to move votes in either direction. He's been pretty lucky to be unnoticed.”

“If he just allows the 'we're cutting higher ed' to stand, he will continue to lose in the court of public opinion. This governor is failing to get out among the people, and it's causing not only resentment towards him, but also allowing the other side to win the P.R. battle. The governor should talk about the excessive salaries, benefits and 'jobs for life' state university professors receive.”

Stefano also faults Corbett for moving to implement the insurance exchanges required under the embattled health care reform act and, like other conservatives, is frustrated that he has not addressed “union abuse issues.”

It's Corbett's ultrasound comment, however, that could prove a media-friendly albatross in an election defined to an unexpected degree by women's health issues. A recent poll showed Obama’s lead over Romney in Pennsylvania opening up to eight points, even as it diminished in other important swing states. The reason for Obama’s surge is new support among women voters. And women, according to polls, oppose Corbett's proposed cuts to higher education by an even greater margin than they oppose the transvaginal ultrasound. When it comes to Republican-led austerity, it seems that Pennsylvania women will have their eyes wide open this November.