It pays to be trash TV

"2 Broke Girls" is unfunny and racist -- and it knows it. Then why are so many people watching? 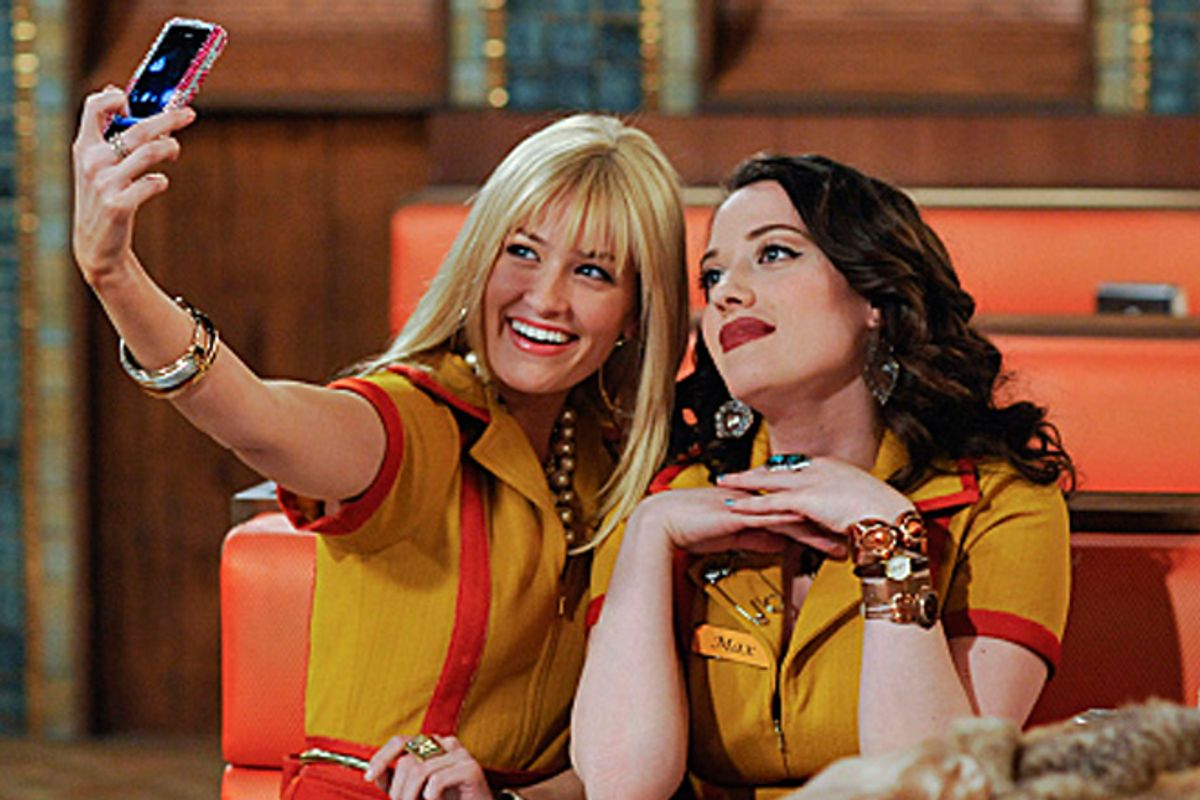 TV was created to sell soap. It’s not glorious, but there it is. For most of its not very long history, television was a medium designed to get an audience to stay tuned for the next set of commercials. It’s only in the last two decades that making quality  TV -- nudged along by a trickle, and then a flood, of ambitious showrunners with explicitly artistic intentions -- has become an end unto itself, a socially valuable, prestige and brand burnishing endeavor, ratings be damned. The rise of “quality TV” doesn’t mean that workaday TV, some of it fun and escapist and satisfying, has ceased to exist. If “Mad Men” and “CSI” coexist fairly peacefully, there is still a TV fault line where art and commerce rub against each other, and no show this year has exemplified the difficulties of navigating that fault line quite like CBS’s “2 Broke Girls,” which wraps up its first season tonight. “2 Broke Girls” has always aimed to sell soap, but because of its pilot and its pedigree, it got mislabeled as art. It has spent the rest of this TV season getting kicked, hard, out of the gallery.

“2 Broke Girls” garnered some of the best early reviews of the year. Created by Whitney Cummings and Michael Patrick King, formerly the “Sex and the City” showrunner, the pilot was tawdry and tart, co-starring two actresses with great chemistry.  (If you want more on why “Broke Girls” seemed promising, read this piece from the AV Club.) Since then, the show has failed to live up to its potential in almost every particular. The extremely crass jokes and broad, stereotypical racial humor that characterized the show’s early episodes have, if anything, increased over the series’ run. It now plays like a broken record, scratch-scratching in a deep groove of profanity, distasteful ethnic humor and character non-development. Despite this, “2 Broke Girls” is the most successful new comedy of the year. It has not become the ratings juggernaut of, say, “Two and Half Men,” but it averages around 9 million viewers an episode, double or triple just about every comedy that airs on NBC and even Fox’s hit freshman series “New Girl.” It’s already been picked up for a second season.

The early expectations of “Broke Girls” go a long way toward explaining what happened at a now infamous panel at the Television Critics Association this past January, in which King got into an unexpected, heated fight with a roomful of hyper-engaged TV consumers. At a tense, awkward panel discussion, a number of journalists peppered an increasingly defensive King about the show’s use of racial stereotypes — the diner where the titular girls work also employs a diminutive Asian man who speaks in a thick accent, a “jive-talking” older black man and a perverted Eastern European chef — and the nonstop dirty jokes, and how the show was going to correct them. King was ill-prepared to deal with the criticism. He ended up asserting that because he was a gay man he was allowed to make fun of whomever he wanted, and ultimately contended that the show was working and he had no plans to make any changes.

If one were going to translate the subtext of the conversation into text this is more or less what was said:

The panel was just the latest, and certainly not last, skirmish in the battle between showrunners and superviewers. The superviewer, as helpfully defined by Adam Sternbergh in his New York Times Magazine piece on “The Killing’s” showrunner Veena Sud, is part of an “online jumble of professional critics and opinionated amateurs who gather together to watch and discuss and dissect their favorite shows.” They are influential “engaged, passionate and vocal,” read, watch, tweet, write and comment exhaustively about casting, spoilers, meanings and what shows belong in "the golden age" of TV, whether "The Wire" or "The Sopranos" or "Buffy" is best, and how a show like "2 Broke Girls" can be "fixed."

All the questions asked at the “2 Broke Girls” panels were great ones, just as all the reams of text that have been written about how "2 Broke Girls" could improve itself have been dead on. "2 Broke Girls" has some really obvious problems, and if King were at all interested in changing those aspects of his show, it would improve dramatically (or at the very least, stop being so racist). But he's not. He wants to make soap. And he has been so steadfast in this belief, that I have started to feel like the amount of criticism we superviewers (and believe me, I've spilled some type, and more talk) have heaped on "2 Broke Girls" this year is akin to getting Clement Greenberg to do a critique of a guy trying to draw in the style of Bob Ross. It's more than the show deserves, but it's also overkill, and it doesn't serve the audience who, eight months later, still likes the show, and doesn't need to hear again how bad it is.

“2 Broke Girls” is an unambitious show that, in retrospect, had the misfortune of having a decent pilot. If it had had a bad pilot, it could have spent this whole year being just as successful, mediocre and offensive as its CBS siblings, "Mike and Molly," "Rules of Engagement" and "Two and a Half Men," but in the same peace and quiet those shows enjoy. Wasted potential is far more heartbreaking than no potential at all, but at some point, you have to wash your hands.