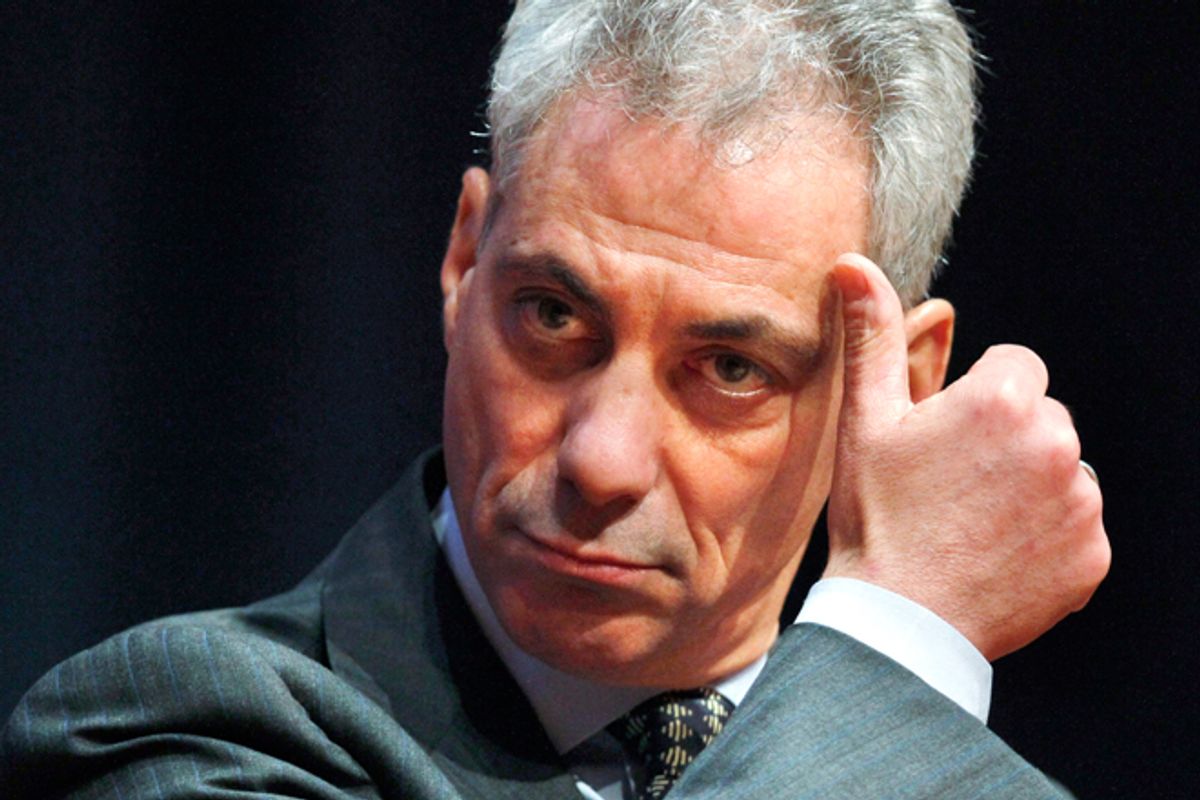 When Mayor Rahm Emanuel introduced a “new and innovative” financing tool last month to help Chicago renovate failing infrastructure without precipitating another budget crisis, many in the city were understandably critical.

Chicagoans have already endured the notorious 75-year lease of their parking meters to a consortium headed by Morgan Stanley. That sale promulgated a system wherein the public is held hostage by private finance, due largely to the inclusion of arcane legal stipulations like “non-compete clauses” and “compensation events” in the language of the contract.

Ellen Danin, writing in the Northwestern Journal of Law and Social Policy relates that: “Chicagoans learned about compensation events when CBS reported that the city’s parking meter contract required reimbursement for events like repairing streets. Public records showed that in the first quarter of 2009, the city was liable to the parking meter contractor for more than $106,000 in lost income during the slow months for street repair and street closings for festivals, parades, and holidays, as well as repairs and maintenance. At that rate, it is not unreasonable to predict that Chicago will owe roughly $500,000 a year to the private contractor.”

The city essentially acts as an insurer for the meter merchants, with the return being a one-time injection of roughly a billion dollars that the previous mayor, Daley the Second, haphazardly exhausted on closing budget deficits in the waning years of his two-decade tour at the helm.

With the current infrastructure deal, Emanuel has repeatedly claimed that this is not privatization: This is not like the parking meter deal. Can the public believe him?

Here is how the “infrastructure trust” works: the city pays for upgrades to its roads, rail or schools with dollars pooled by Emanuel’s friends from the banking and investment world. Meanwhile, the city retains “ownership” of the infrastructure, though this comes at the cost of having to ensure a revenue stream for the fund. Emanuel’s favorite example is his $225 million pet project to green-retrofit some of the city’s older buildings. The savings on energy usage stemming from the renovations are then extracted and used to pay off investors. Of course, the city could also sell municipal bonds to raise necessary funds, and then use the savings in energy costs to pay the loan back at a much lower cost to taxpayers. But then Emanuel’s friends (and campaign donors) would not be the richer for it.

While the mayor bills his plan as “bold” and “innovative,” the reality could not be further from the truth. Public-private partnerships (PPPs) have been around for decades in various forms and their track record is replete with delays, cost overruns and prolonged legal battles. What’s more, the beneficiaries of these investment mechanisms are the same rapacious Morgan Stanleys and Goldman Sachs that gave us the mortgage-backed securities scandal and the ensuing recession. Using the economic malaise they created as cause, they have ratcheted up their advocacy of PPPs as a means of helping cash-starved public entities finance capital-intensive projects.

The upshot is that they are holding us hostage all over again. They are using infrastructure built over decades with public monies as collateral to extract profit off of the back of taxpayers. A cursory look at some past projects of this nature demonstrates that PPPs are often inefficient, overly costly and inherently unjust.

The granddaddy of all PPP debacles is the London Underground. Metronet PPP is the brainchild of former Prime Minister Gordon Brown. The contract design kept London Underground in public hands while privatizing the renovation and renewal elements to the system. As with the Chicago parking meter deal, the contract was replete with virtually unintelligible legalese designed to give the private partners an advantage in court, while also rendering public scrutiny of the contract exceedingly difficult. Bureaucratic costs related to drawing up contracts with external bidders ultimately surpassed 500 million pounds.

In the Guardian, Christian Wolmar notes that “the idea that the PPP would keep costs down has also proved fanciful. It is a recipe for disputes, which often end up in the hands of expensive lawyers. During the first contract, there is a mega dispute brewing over Tube Lines' failure to complete the resignalling of the Jubilee Line which should have been finished this month and is now set to take until the autumn, with numerous extra weekend closures. In addition, the arbiter's report says that claims involving a staggering £727m have been laid by Tube Lines, £500m of which are still outstanding.”

As bloated contractual costs and project overruns spun out of control, Metronet ultimately collapsed in 2008. A year later, the entire PPP went down with it after an arbiter refused to allow funds for the other private partner, Tube Lines, to do further renovations. The final cost to taxpayers is estimated at somewhere between 170 million and 410 million pounds, which does not account for the inconvenience of relentless service stoppages and construction delays. Former London Mayor Ken Livingstone complained at the time: “We are being asked to write a blank cheque in order to prop up failing Tube Lines. In other countries this would be called looting, here it is called the PPP.”

Almost equal in disrepute to the London Tube fiasco was the privatization of one high-occupancy vehicle (HOV) lane on California’s SR-91. In the early '90s, the Orange County Transportation Authority (OCTA) proved incapable of procuring necessary funding for implementation of the new HOV using traditional revenue streams, so instead developed a private partnership to construct and manage the project, which opened December 27, 1995.

This contract included “non-compete” clauses that prevented the public from providing necessary maintenance to the adjacent free lanes. The California Department of Transportation hoped to add new lanes between SR-91 and another recently completed public toll road. These improvements would have violated the non-compete terms of the contract, though CalTrans argued there were overriding safety concerns that permitted them to proceed with the construction.

The ensuing public row served to turn opinion against the private toll lane. Ultimately, the outcry led to passage of Assembly Bill 1010, which authorized OCTA to acquire the lane for $207.5 million in 2003. California’s earliest experiment with private financing of a publicly controlled entity, like the London Tube, came crashing to a premature halt on the heels of widespread public outrage.

What is most telling is that popular frustration centered on a principal term of the contract, which was publicly available for viewing prior to approval. Once again, a common ploy of instigators of these contracts is rendering the terms so confusing as to limit public scrutiny. Meanwhile, the mainstream press tends to focus on the bottom line and avoid the esoteric legal mumbo jumbo, much to the detriment of an enlightened public.

California, ever the epicenter of political innovation, was also the site of another one of the most significant PPP boondoggles. In this case, Australian investment group Macquerie led an assortment of banks that invested in a new expressway from San Diego to the Mexican border, beginning with the project’s commencement in 2000 and lasting until the contract expiry in 2042.

However, faced with the challenges of the housing crisis and wider economic slump, the project faced persistent toll revenue shortfalls and ultimately filed for bankruptcy last year. Meanwhile, the cost of the project jumped from $360 million to $843 million, while being delayed for over a year. In the bankruptcy proceeding, the South Bay Expressway LLC was created to administer the road and ultimately purchased by the San Diego Association of Governments (SANDAG) for $344.5 million.

This project received an initial $140 million boost from funds provided by the Transportation Infrastructure Finance and Innovation Act (TIFIA). TIFIA is designed as a tool to provide federal investment in PPPs. Interestingly, Rahm Emanuel cited the program as an example of a financing tool that his Infrastructure Trust is based on. However, this is a bit misleading, as TIFIA is composed entirely of federal funds used to augment existing finances for capitol projects. Meanwhile, Emanuel’s trust is composed of $1.7 billion in funds raised from private banks leveraged against a $200 million investment by the city.

Nonetheless, the two shortcomings of this project are particularly instructive. Its primary problem was the failure to meet the initial high-shooting projections initially set out. Traffic patterns are extremely difficult to accurately anticipate: a situation not helped by the backdrop of the worldwide recession and the location of this road in a region that was particularly burdened by the foreclosure crisis. The intrinsic uncertainty of usage of public infrastructure renders it a poor focal point for private, profit-driven investment. The reality is that parks, roadways and bridges require periodic capital investment irrespective of profitability. Public entities are far more well-equipped to finance these unreliable projects for the very reason that government is not motivated by profit.

The second problem this project faced by this PPP, like so many others, was its predilection to legal wrangles. SBX was involved in legal proceedings with InTrans, the toll system provider, and a number of construction related contractors. One source speaking with TollRoadNews called the governing contract a “sue-me contract” that was “made for litigation.” Given the immense costs seen by the London Tube PPP, this should come as no surprise. These projects seem to invite costly litigation just from their sheer complexity.

Toward Sustainable Investment in Infrastructure

PPPs are purported to make additional resources available for public expenditure on capital-intensive infrastructure projects. However, the opposite tends to be the case. A report published by the Public Services International Research Unit notes: “The great majority of PPP’s rely on a stream of income from payments by government – i.e. public spending...In a context where there are political demands to cut public spending, the existence of PPP’s creates greater threats to other spending on public services. This is because PPP’s create long-term contractual rights to streams of income, and so governments are legally constrained from reducing payments to PPPs.”

Even the International Monetary Fund warns that public investment in PPPs should be subject to strict scrutiny in a July 2009 publication: “Intervention measures should be consistent with the wider fiscal policy stance, be contingent on specific circumstances, and be adequately costed and budgeted.” The IMF also argues that PPPs related to weathering the economic crisis should include a “turn off” mechanism. A green paper published by the Commission of the European Communities in April 2004 even went further, recommending against PPPs as a tool to close any budget deficits. They argue that the mechanism should be employed primarily when the private entity is providing a specific field of expertise.

After all, why should anyone trust the same racketeers who precipitated the global economic crisis to make acute investment decisions on behalf of the people? All levels of government face serious fiscal constraints stemming from a range of causes, including the ongoing recession and regressive tax policy across the board. When financiers so generously offer to open up the purse strings to invest in pet infrastructure projects, the public response ought be: “No, thank you. Instead, we are going to raise the top marginal tax rate.” That would be a far more efficient and prudent way of beginning to tackle the fiscal crises in government.